How the Happiest Man Alive made a Central Park-sized Contribution to the World.

Since the beginning of time, we have been intimately connected to the environment.

Civilisation’s love for technological growth and industrialisation has obliterated an immeasurable part of the planet’s flora and fauna, altering our relationship with nature for good.

The term deforestation is not unfamiliar; we cut trees for our own comfort, leaving the land barren and its wildlife bereaved.

Fortunately, there is growing awareness of the consequences of our actions and the importance of living in harmony with nature. The brave lead environmental movements worldwide to protect the environment and our future generations from our own disastrous mismanagement of natural resources; there is much we can learn from them.

Who is Jadav Payeng?

In 1979, Jadav “Molai” Payeng, a cowherd from Assam, northeast India, worked just a few miles away from one of India’s greatest and most affluent rivers, the Brahmaputra.

One day, he noticed something strange: many dead snakes were found washed up on the shore of Majuli island—the Brahmaputra’s largest river island—due to flooding. Curiously, during the summer of the same year, many more were found dead on account of the rising heat.

Payeng, who was deeply disturbed by this, realized the value of ecosystems.

It was then that he undertook the ordeal to save Majuli island. He started his project by planting 20 bamboo seedlings in the drought-stricken area, longing to see them become towering trees inhabited by majestic wildlife. As time passed and his hopes increased, he continued planting diverse species of trees across the island.

Lesson #1: The Power of Determination.

Taking action is vital if we want to achieve our goals, dreams, and desires. Commitment and determination are key factors in the success of any endeavour, which always requires some form of sacrifice.

Jadav offered his time and energy each day to give life to a barren land. His love for nature is such that he promotes environmental education in schools, requesting the education system to include the planting of saplings early in a student’s curriculum. It’s a small step toward making the planet greener and teaching younger generations the importance of living in harmony with the environment.

Molai Sanctuary’s one-horned rhinos attracted poachers in 2013. Jadav was able to stop them in time by promptly alerting officials who seized the various traps and hunting artifacts that were placed across the forest.

Even 40 years later, his commitment to the environment is left untouched. In the modern age of industrialisation, Jadav—with no resources—has shown us what human conviction can achieve.

Thomas Fuller once said, “He that plants trees, loves others besides himself.” Payeng is a living tribute to Fuller’s quote. He calls himself the happiest man alive, and his aim is to keep planting trees until his very last breath.

Jadav teaches us what unconditional love for nature and the environment can accomplish. What started with just 20 saplings has given life to an entire ecosystem. Payeng’s work resulted in a forest filled with flowers, fruit-bearing trees, and extraordinary wildlife, including Bengal tigers, rhinos, deer, cows, vultures, and elephants.

Lesson #3: The Power of Selflessness.

Selfless service is action without expectations—when we do something for the benefit of others, expecting no form of reward or recognition for our work.

Payeng’s life is an example of what true selflessness is. He walked to Majuli island each day with the intention of planting new trees, only out of love. He wanted nothing other than to see his seedlings grow into a beautiful forest. No reward, no recognition.

Little did he know, decades later he would be named “The Forest man of India” by a former president and would receive the prestigious “Padma Shri Award”—India’s fourth highest civilian accolade for outstanding work.

True selflessness is an act of love. We are selfless because we identify with the problems and hindrances of others. Jadav’s actions were not an act of charity, or even an act of generosity. They were born from a feeling of oneness with Majuli island.

It is only out of the combination of unreserved love, absolute determination, and true selflessness, that one man with no resources or connections could create a 1,360-acre forest, bigger than New York’s Central Park.

Jadav Payeng’s life has shown us unequivocally that when love, determination, and selflessness work together, masterpieces are born. 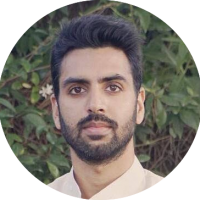 Kedar Nath is the Founder of The Yogi Press. He was born and raised in Barcelona, and considers himself a blend of East and West. Yoga has played an essential part of his life… Read full bio