3 Things Everyone gets Massively Wrong about Manifesting.

There’s so much material out there right now around manifesting and creating the life of our dreams.

We’re often told that if we create a vision board, our dreams will come true, or that if we fake it until we make it, we’ll attract what we want in our lives.

It’s great to follow these simple steps to start using our thoughts to create change in our lives. But time after time, what I’ve found as a healer and coach is that my clients keep missing the mark with manifesting, usually because one of the most important elements isn’t there.

1. I created a vision board and look at it, but nothing’s happening.

People often create a vision board, and expect everything to magically appear.

If we’re not taking aligned action, just creating a vision board and hanging it up is not going to get you the things you want. Not only do we have to hold that vision, but really believe that those things are already ours, and take real steps toward it.

Creating a vision is just the start. But, it really comes down to designing actions.

For instance, if we’re trying to call in more vacation time, picking the dates and destination must follow. We have to take action that is in alignment with our vision board, otherwise we’re at a standstill.

We can start by taking a look at what we want, and writing down each action step that can move us toward that vision. Then, we’ve got to take those steps!

2. I meditate and repeat mantras every day, but my life isn’t any better.

I can’t tell you how many people tell me that they repeat their positive affirmations and mantras in the mirror every morning, but aren’t seeing any improvement.

We may be saying “I am happy,” or “I am abundant,” a million times, but we’re not channeling the emotion tied to it if we’re not emotionally connected to the words.

A disconnection from our mantras and affirmations means we’re saying them out of habit more than than out of belief.

What’s happening, then, is that we’re verbally repeating something we’d like to manifest, but energetically neutralizing it. We have to believe with every cell in our being that the things we are affirming and the mantras we are saying are actually true.

Take the time to search for the exact words words you can really get behind and feel.

We’re often told to fake it until we make it. As a result, I see people acting as if things are better, but not feeling the results.

In the spiritual, new age world we’re living in, this can be a big problem. Faux positivity becomes an excuse not to deal with our negativity, which is also known as spiritual bypassing.

A key to spiritual bypassing is the popular belief that we need to be “high vibe” all the time, or that we always have to be in a positive state. If we’re not, the belief is that we’re going to attract negativity.

Although there is some truth in that, when we look at the laws of attraction and vibration, the more important truth is that we also have to work through the things that are bringing us down so that we can move through them.

Many times, we won’t actually acknowledge or work through blocks like the root of our doubts and fears, that are preventing us from calling in what we really want.

When working on myself, it’s crucial that I look at where blocks are showing up. If I’m doubting some of the things I’m saying, or any fear is tied to the visions I put on my board, then I need to figure out where those blocks are stemming from so that I can remove it, and move forward.

It’s absolutely critical that we look at what’s holding us back to find any limiting beliefs.

We can’t just fake positivity and hope it will be enough. We really have to work through whatever is holding us back, feel through the discomfort of so-called negativity, and give ourselves grace to move through it.

It’s only then that we can begin looking at those vision boards, saying those affirmations, and truly believing in them so that we can call our dreams to us. 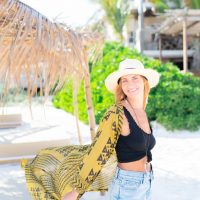 Andee Love is a highly-trained, healer & coach who works with female entrepreneurs to spark breakthrough personal and business growth. She devotes her energy to sharing he… Read full bio