The Moon Soothes my Soul.

Luna, the beautiful goddess of the Moon,
dressed in shimmering white with a crown of stars around her head.
A quiver with golden arrows on her back,
a bow in her right hand,
ready to pierce the night with her brightness.

I spend many evenings just staring at the moon.

Through bedroom windows, kitchen windows, car windshields, outside. Every season for me is ripe for moon gazing.

I have stood on the shores of oceans, the hills of the desert, and the decks of cruise ships, watching the majesty of the moon rise into the sky. I have been so enchanted that I have stopped deep conversation so I can watch as this heavenly body takes her place in the heavens.

The moon soothes my soul and connects me with the universe.

I have been fascinated with the four-billion-year-old rock we call the moon since fourth grade. My fourth-grade science teacher, Mrs. Culp, explained how the moon orbits the earth while the earth orbits the sun. She spoke of moon phases, tides, and astronauts. Our science classroom, with its high-top lab tables and greenhouse, was the owner of a solar system model. I remember the feeling of turning the crank on the model and watching everything rotate. It was fascinating. I remember the astronauts landing on the moon and thinking, what a wonderful job they have. In my nine-year-old mind, how surreal it seemed to walk on what my teacher called, “the glowing night sun.”

I have been obsessed, enchanted, and mesmerized ever since fourth grade.

One Sunday evening, as I drove home from my Ashtanga yoga practice, I remembered that the moon was in the “new” phase. Soon, the tiniest sliver of white appeared in the clear, late spring/early summer evening sky, creating delight and eliciting my usual, “Hello, Luna.”

I woke up the next morning feeling empty and lonely. I was puzzled. I went to bed happy and content and woke up with the exact opposite emotion. I had no bad dream, I slept very well, so why?

Folklore holds that during a full moon, people seem to be in a heightened emotional state. Tales of lunacy, werewolves, and an increased rate of accidents are said to be blamed on a full moon. There is nothing to prove those claims, but is it possible that we are affected by the moon?

Think of this: the moon has a gravitational pull on the earth, creating high and low tide. So, it would be logical that the moon would have the same pull on human beings. After all, the human body is approximately 75 percent water.

I decided to do an experiment. I would make a note of my emotions and observe how they correspond with the moon phases. After a month, I realized that I was affected by where the moon is in her journey across the sky.

Here is what I found:

During a full moon, I feel energetic and enthusiastic—feisty, even. I have a desire to take on new projects and have an adventure. My meditation practice is effortless. My yoga classes are lively, full of extra mantras, chanting, breath practice, and poses.

The new moon, on the other hand, leaves me feeling empty, lonely, and often melancholy. The new moon is a time of renewal. A time to set intentions, to start over. This moon phase encourages me to be okay with feeling lonely. It is a time to make space. My meditation practice is often more difficult, my mind “thinking” instead of settling in. Trying to fill the loneliness. My teaching also reflects this phase; my classes seem to be slower paced, gentler, and have a longer savasana (the resting pose at the end).

Is there a connection between the moon phases and our emotions? I do not know, but I do know that my emotions seem to reflect the different stages. Does it matter? In the big, grand landscape of our lives, probably not. Is it a fun thing to think about? Yes!

Do your own experiment. Buy a calendar with the moon phases, or, better yet, use an online moon phase calendar. I like this website.

Take some time charting your emotions along with the phases of the moon. See what you come up with. You may have a deeper connection to the moon than you know.

With the full moon’s energy and enthusiasm and the new moon’s emptiness and introspective aspect, my deep devotion to our beautiful moon continues. It never wavers.

Through thick and thin, new and full, I am still obsessed, enchanted, and mesmerized. 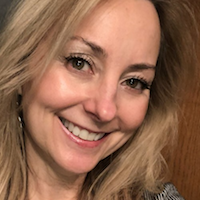 Cindy Chase is a yogi, accountant, traveler, writer, and podcaster. She loves to teach and talk about yoga and meditation to anyone who will listen. She raised two beautiful h… Read full bio