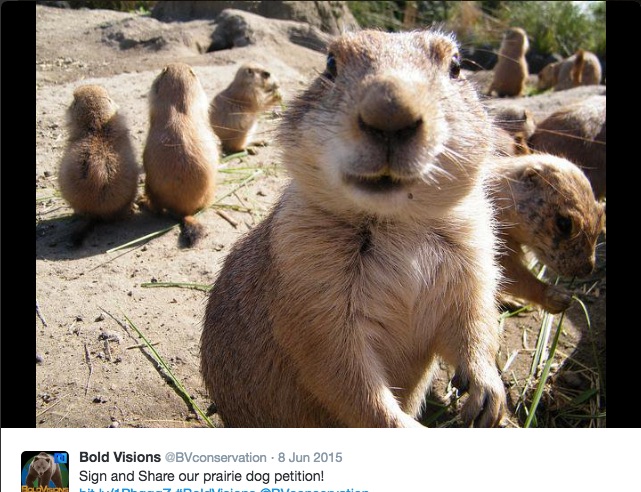 Let us extoll the virtues of the Prairie Dog.

The below comes from an acquaintance on Facebook, and is shared here because the info is valuable and we gotta support our prairie dog friends:

[a prairie dog was caught in a window well of one of these good humans, and got out after being offered a “ladder”]

As a prairie dog advocate, I just don’t understand the irrational hatred many people have for this animal. As a declining keystone species, prairie dogs are crucial for the health of our prairie ecosystem and provide food for many animals (hawks, owls, coyotes, badgers, foxes, eagles etc) and shelter (mice, amphibians, snakes, insects). Without the prairie dogs, black-footed ferrets and burrowing owls would go extinct. For millions of years, prairie dogs have aerated, churned and fertilized the soils and made this land what it is.

These humble little creatures really deserve so much respect, but people villainize them and humans continue to do atrocious things to prairie dogs and all the other the animals that are in the burrows (bulldozing them alive, poisoning them with cheap and cruel poisons, using them for target practice).

I really hope that opinions will change soon and more protection will be given for prairie dogs. Without them, our prairie ecosystem will surely change, and not for the better. Our prairies would be a lot quieter and less lively with prairie dogs gone!

Also: It’s a myth that prairie dogs carry the plague. They can get infected by a plague infested FLEA and at which point prairie dogs will die very quickly. Plague is an exotic disease that humans brought to this continent and prairie dogs have no immunity to this bacteria. They are being made scapegoats out of something they are not even responsible for.