When an Iranian tries to Board a Plane.

I’m looking forward, as I have finished preparing my galley and labeling the 22 “special” meals for the passengers who have boarded my flight, which is Heathrow bound.

Already, I’m a bit weary after an absurd day of commuting from my home in Tucson to my base in San Francisco.

The plane is boarded, so I begin my pass forward to close overhead bins and make sure my guests aren’t in violation of any FARs (Federal Airline Regulations) that need to be addressed before the main cabin door is closed, signaling we are ready to push back the plane from the jetway.

In the aisle is a dark-haired, slender man, on his hands and knees, mucking through his bulging backpack, papers in piles scattered across the carpeting between 50C and 50D.

“Sir,” I approach him. “You need to pack up and be seated. We are ready to close the door and we are unable to do so until your bags are stowed.” He looks up at me, face tight, brown eyes sharp with frustration and, I presume, anger.

“I’m working on it,” he says, returning his gaze to the piles on the floor.

I step over him and his piles as I head to the front of the cabin, and as I return, he is still on the floor, removing more items from his backpack, putting others back in. The piles remain.

I can’t hear or perhaps don’t absorb all of his words as he stands up, eyes bright with anger, face taut: “Racist…damn American carriers…treated horribly, every time. Paying passenger…last on the plane…”

His ire grows to full height as I take my stand, holding one arm up between us, creating a virtual boundary. The other passengers watch our confrontation with concern and curiosity.

“I will help you with your…” I begin.

“Do not touch my bag. I will find a place. Leave me alone.”

I look at his papers, noting they’re written in a combination of Arabic and English, and realize his accent is resoundingly Middle Eastern. Other male passengers who witness the confrontation tell me they “have my back” in case I need them. I stride back to the galley as another flight attendant approaches me with concern.

“I’ll handle it,” I reply, and use the interphone to call our purser, the lead flight attendant, and apprise her of the situation. I approach the man once more, as he finally sits down, his bag stowed in a full overhead bin.

I point to the row behind, where two seats are empty. “There was room for your bag there.” I bend over to speak to him softly. “Are you okay to be on this airplane?” I question—my meaning, I hope, is clear.

I’m summoned to the flight deck. The captain, concerned, asks me if I want the man removed. I say no, believing I have the situation under control. He’s sober, though angry.

I return back to the aft galley, remove my “Link”—the iPhone flight attendants use for everything flight related, from selling cocktails to procedures if the plane goes down in the middle of the ocean.

I pull up his reservation, noting his name as well as his itinerary. This is his second attempt to get out of the country today; he had been booked on an early flight on a different carrier, both flights heading to London and then on to Istanbul. I then Google his name, reading of the several legal battles he’s involved in, primarily as plaintiff, with the majority against Homeland Security.

I feel a combination of understanding and unease—for some reason, he hadn’t been on the first flight and is now on ours.

His behavior calms, and a standby flight attendant who was seated in the same row moves over and engages him in conversation. His mood seems to lighten as the time passes. Midway through the flight, he comes to the galley and apologizes for his behavior, attempting to explain.

He asks me if I could have had him removed, to which I respond, “Of course.” He asks why I didn’t, and I tell him that when I asked him if he was okay being on the flight, his answer satisfied me.

He tells me about his day.

As an Iranian citizen, each time he books a flight, he is unable to check in online. Each time he arrives at the airport, he asks for a supervisor, attempting to streamline the inevitable. The inevitable, for a man like him, is always an extended search and a trip to the back room of TSA or Immigration, where he is questioned and his travel habits are examined.

What would take an ordinary United States citizen 20 minutes takes him two hours. That happened earlier today, and he missed his original flight. He tells me of the “start-up” he has, courses on cultural integration and mutual understanding.

He is sincere as he tells me of being raised in Iran, then Istanbul, by a single mother. He’d told himself he would never treat a woman as he has treated me today. He doesn’t want to end the conversation. By the end of the flight, he has given me his e-mail and asked for mine, asking me to come and speak at one of his classes.

As he deplanes in Heathrow, he smiles at me, humble and apologetic. And off he goes, as I wish him safe and uneventful travels on to Istanbul.

Friday evening in London, I treat myself to a play I have been wanting to see, “Come From Away.”

It’s the story of a small town, Gander, in Newfoundland, where, on 9/11, 6,700 passengers on 38 planes were grounded as air traffic was halted after the terrorist attacks. The passengers doubled the size of the town.

The actors play the parts of passengers, flight crew, and town people, and their stories are interwoven, showing how humanity bonds, especially in the worst of times.

My tears flow freely. I had fellow flight attendants who were grounded in Gander for several days, while I was safely at home with my small child and husband.

One character, a passenger named Ali, was an Egyptian Muslim. His fellow passengers treated him with callousness and bigotry. The town people didn’t seem to be as concerned, and invited him into their homes. The day the passengers reboarded the planes to head back to Dallas, he was singled out and strip-searched, as the female captain looked on. He was humiliated.

After the play, my thoughts return to the man from my flight earlier that day. Empathy floods my heart.

For 18 years, he and others like him have been singled out and strip-searched.

And not just on airlines.

He has been strip-searched every day by wary humans in every glance: Iranian. Muslim. Evil. Terrorist.

Travel, however, is often the harshest experience. 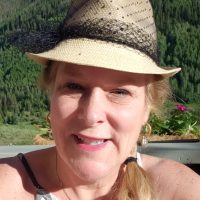 Carolyn Pope is a Coloradan and Tucsonian, and find both mountains and desert feed her soul. She graduated from University of Colorado with a degree in creative writing, and s… Read full bio

What to do if you catch someone reading the Quran on your flight. Slapping Babies & the TSA.
See relevant Elephant Video