Why we don’t have to Give Up on Yoga when we get Sick of It.

I’ve always been attracted to the floatier side of yoga.

I longed for those meditations in which I had out-of-body experiences, and I sought teachers who spent the entire class talking about spirit and prana and the like.

I craved the sense of the divine in my practice and was always looking for the airy classes that I believed would take me out of my body and into my “higher self.”

I had been practicing this type of yoga for about nine years, but I was beginning to feel stuck.

I think we can all agree that 2018 was a crazy year. In addition to everything that was going on in the political and social spheres, I was dealing with my own personal roller-coaster.

I moved back to New York City that summer, a decision that shone a light on my tendency to overwork and push myself toward someone else’s vision of success. I moved in with my partner, a choice that brought my continual patterns of self-hate and fear of rejection to the forefront. And I started working with a psychoanalyst, a commitment that helped me see how much I clung to my diagnosis of OCD and panic disorder as a form of protection and self-defense.

As I worked through all of these emotions and realizations, I turned to my yoga practice to support me.

Yet, I didn’t feel like it was doing the job.

Anytime I got on the mat, it felt forced. Anytime I moved through asana, my body felt uncomfortable. Anytime I tried to meditate, my breath became labored. My body was rejecting the yoga I’d relied on for nearly a decade.

Gradually, my yoga practice went dormant. I started journaling instead of meditating. I started walking in nature instead of sitting on my mat. Cuddling with my dog replaced Savasana, and in lieu of asana, I found dance.

I’ve never been a dancer. I am notoriously uncoordinated. Gracefulness is to me what Moby Dick was to Captain Ahab—elusive, desirable, and unattainable. Convinced I didn’t have the body or poise for it, I steered clear of dance and fulfilled my desire for movement in vinyasa flow classes instead. But with my yoga practice on pause, I had to find another outlet.

It happened in April 2019. Enlivened by the spring energy and the hope that this year would be better, I was enjoying a blissful week in Toronto. It was there that I came across Tribal Trance Flow, a class that markets itself as a fusion of yoga and tribal dance. Curious, and ever the adventurer, I decided to try it out.

The class was unlike any I’ve ever been to. While certain movements felt familiar (Cat/Cows, Downward Dogs, and Cobra poses to name a few) the bulk of the movement was freestyle. The sound of tribal drums filled the room and Carol, our teacher, invited us to move in a way that was natural and self-guided.

The music and the energy of the class became increasingly intense, accompanied by Carol’s reminders to “let go,” “surrender,” and simply “feel your body.”

About halfway through the class, I understood why the word “trance” was part of the title.

With each passing movement, I felt my self-judgment lessen. Carol’s consistent reinforcement gave me the permission I needed to stop worrying so much about how my body looked and simply feel the music instead. Once I did that, I felt my mind enter a trance-like state. Most of my thoughts went quiet and all of my inhibitions shut off; instead of judging and doubting, I listened and felt. I listened to the way the stomp of my foot mimicked the sound of the drum. I felt the way the swing of my hips recreated the whoosh of the flute. I experienced the way my heartbeat pulsed with the rhythm of the vocal chanting. At that moment, my body and the music were the only things that existed.

It was an incredibly connected, grounded, and in-body sensation that filled me as I noticed every contraction of my muscles and every rise and fall of my diaphragm; I felt immersed in my body and fascinated by the physicality of my existence.

When I left Canada, I was sad. While the class has been powerful, it only existed in Whitby, Ontario. And I lived in New York City, 507 miles away to be exact. For the first time in nearly a year, I had felt connected to a practice again and I longed to pursue it further.

Slowly, I started exploring how I could practice on my own. Every once in a while, when my partner was at work and I, working from home, would start to feel the pull of the afternoon lull, I would put on some shamanic drumming playlists Carol had recommended and dance around my living room.

It started as a small, 10-minute interlude when I needed a break. But some days, it felt so good I would let it last a little longer…maybe 20 minutes, maybe 30. The more I danced, the easier I found it to listen to my body.

Soon, I heard my body craving some familiar movements. So I integrated a little more asana into the dance and let my body move seamlessly between the two, not trying to categorize what the practice was—yoga, dance, or something in between.

Eventually, the cravings of my body got a little louder and their request was clear: “take us back to yoga!” it cried.

I was nervous; I hadn’t practiced a traditional yoga asana sequence for 10 months and I knew my body was going to have trouble keeping up; or rather, I assumed as much. The reality was when I returned to my local yoga studio for a Hatha Flow class, I thrived. My body felt stronger than ever and I moved through each asana with a sense of stability and ease I’d always assumed was a myth. Even my meditations felt deeper and more peaceful. I was accessing a level of the practice I didn’t believe was available to me.

Looking back on it, I realize that in the summer of 2018, my practice did not go dormant as I had thought, but rather, it had undergone a necessary change.

With all that was happening in my life, and all the self-work I was doing, I did not need to be lifted up to the stars; I needed to be pulled back to Earth. Journaling became my meditation because processing my emotional experience was more important than accessing a spiritual high. Nature replaced the studio because I was in desperate need of grounding. And dance replaced asana as my subconscious craved to move into my body rather than out of it.

Today, my practice is a fusion of the two, much like the fusion I found in Tribal Trance Flow. Sometimes, I move to that tribal drumming, dancing and playing with my body in ways that feel natural and free. Other times, I move in silence, exploring the stillness and peace found in traditional asana. One day I’ll meditate, the next I’ll journal, and still other days I’ll simply go for a walk.

I try to listen more to what my body and spirit are asking for, and I’ve started to reconnect with yoga as I reframe it as a practice that reacts to my needs rather than a prescribed method to cure what I think I lack. 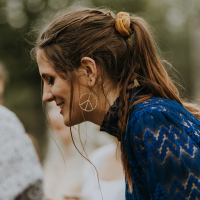 Sarah Dittmore is a yoga student and host of The Beginner’s Mind, a podcast about all things yoga-ish. Join her at www.shutupandyoga.com/podcast as she discusses major i… Read full bio

7 Common Misconceptions about the Types of People who Do Yoga. 13 Things Yoga Isn’t. 15 Cool Things Yoga has Taught Me. (Hint: None of them are Handstand.)
See relevant Elephant Video