7 Common Misconceptions about the Types of People who Do Yoga. Some folks are put off by yoga because they are convinced that they don’t fit the yogi label. I certainly felt that way before my first yoga class, certain that I was nowhere near flexible enough. I was afraid that I’d fall on my face and make a fool of myself!

However, the truth is that yoga is a practice that everyone is welcome to participate in, regardless of body shape, size, or flexibility. Today I’m clearing up seven common misconceptions about the types of people who do yoga. I’ve learned that there’s no one type of yogi, but rather, yoga is open to anyone and everyone!

1. Yoga is Only for Flexible People.

Actually, since yoga is designed to increase flexibility, yoga is especially great for people who are inflexible!

While it may be discouraging to see others fold themselves into a human pretzel without breaking a sweat, know that flexibility will come with time and that many seasoned yogis start off struggling with flexibility.

Improving flexibility can provide a wealth of health benefits, and can decrease risk of injury, especially as we age. While yoga is associated with flexibility, there’s no requirement for being flexible to participate. Trust, me, I’m one of the least flexible people I know. Many instructors will actually offer modified poses and moves for those who aren’t quite as bendy as others.

2. Yoga is Only for Young People

Yoga is a practice for people of all ages and walks of life. Plenty of yogis continue practicing yoga well into their 70s, so don’t be put off by age.

For those worried about not being able to do some of the yoga moves, look for classes labeled specifically as gentle yoga classes, or talk to class instructors prior to class about modifications.

3. Yoga is Only for Fit People

Yoga classes are judgment-free spaces, and individuals of all shapes, sizes, and conditions are welcome. Everyone who attends a yoga class is there to improve themselves mentally and physically. Before my first yoga class, I absolutely felt like I “didn’t belong.” The only yoga move I had ever done before was the child’s pose (I think it will always be my favorite).

I was afraid I would be looked down upon for not being able to do poses, but really, folks who are at yoga are focused on themselves—their body, their breathing, their mind. They really aren’t too worried about whether or not I can properly complete a warrior pose.

When starting off, I went with enrolling in a beginner’s yoga class so that I didn’t feel out of my element right away, which certainly helped ease my fears a bit.

4. Yoga is Only for Women

It’s true that many yoga classes are dominated by women, but that’s slowly changing.

Yoga classes provide the same health and wellness benefits no matter what gender, and yoga is now becoming increasingly popular with men.

Yoga was also started by men thousands of years ago, and for many years was practiced exclusively by men.

5. Yoga is Only for People with Money

Yoga doesn’t have to break the budget. In fact, many yoga studios offer special discounts and deals for new members. This allows those with little money to invest in classes to at least get started with a minimal cost.

There are also many free online yoga videos and classes that you can take without even leaving your home—all you need is a mat to get started!

I’ve used a few of these services in the past, and they’re especially great for when I need a quick and easy yoga session. The only downside is that using videos means no instructor to correct me when I’m not doing a pose correctly, so when doing videos, I make sure that I’m very careful about not pushing myself too hard in order to avoid possible injury.

6. Yoga is Only for People with a Lot of Spare Time

Some yoga classes can be as long as 60 or 90 minutes, but that certainly isn’t always the case. There is a wide variety of yoga routines, and there are plenty of benefits to gain from shorter classes if longer ones aren’t of interest. I personally prefer shorter sessions myself, with 30 to 40 minutes being my favorite!

7. Yoga Is Only for Spiritual People

While some individuals gain a sense of spirituality from practicing yoga, it’s fine to simply keep it as an exercise.

Most yoga studios in the U.S. don’t incorporate any religious component into their classes, as studies have shown that 80% of Americans who practice yoga mainly do it to increase flexibility and reduce stress, but aren’t so interested in the spiritual aspect.

I’ve had some Christian family members disapprove of yoga because of its religious component, but as I explain, yoga can be whatever I’d like it to be—it’s certainly not forcing me to convert or change my beliefs. It’s a practice that allows me to be mindful of my body, center my breathing, stretch and bend my muscles, and gain a sense of focus for the day ahead.

With these misconceptions corrected, it’s clear that yoga is for anyone and everyone! There’s no one “type” of yogi we are required to be. We can simply be ourselves and enjoy yoga!

Do you have any other yoga misconceptions you want to share? Tell us your thoughts in the comments! 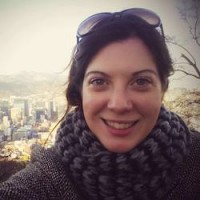