I Shaved my Head & let my Body Hair Grow because Beauty Standards are Bullsh*t.

“Her legs look beastly. How is she not embarrassed?”

This was my precise train of thought five years ago when I saw, for the first time, a woman brave enough to defy beauty norms.

I remember concluding adamantly with my old acquaintances that for women, having body hair—let alone a shaved head—was just plain “unsexy.” I used to label certain superficial qualities in others as being “hot” or “not,” and I would also incessantly worry about how I was being perceived.

However, I realized that trying to fit the constantly changing criteria was exhausting, so I decided this year to participate in “Januhairy,” a campaign which encourages women to stop shaving throughout the month of January in order to experience a sense of empowerment. For some people, it might be hard to understand why this would make a woman feel empowered. Women are judged far more by their looks, as opposed to being valued for their skills and personality. By going against how we are told we should look, we are taking back that control, and giving ourselves the space to self-express without constrictions or fear of judgement.

The beauty industry’s main objective is, and has always been, to profit off of making people feel inadequate in their existence so that they buy products (kindly supplied by the industry itself) to fix their imaginary defects. If we believe that we are innately flawed, not only do we spend our precious energy worrying about meaningless things (instead of investing it into achieving more valuable goals), but we are also kept in a state of shame, and this submissive mindset means we are easier to control.

I was skeptical about allowing my body hair to grow freely, but within just a few weeks I had experienced such a positive shift in my internal and external world, that not only have I not touched my body hair since, I actually took the experiment a step further by shaving off my head of curls.

My curls had always been difficult to manage and I had dreamed for many years of not having that stress, but was too afraid to take the leap in case I was labeled as “unattractive.” I’m so grateful that I did, because here I sit today, fluffy-legged and bald-headed, feeling more confident in my own skin than ever before.

I can’t help but think: if what I find attractive can drastically shift to this extent, what are the forces which shape attraction, and is personal taste a result of nature or nurture?

Let’s examine closely what attraction so often is at its core: judgement.

I’m sure we all can admit that our taste preferences have evolved throughout our lives, and they are certainly not fixed truths. Keeping this information in mind, should we really place much credibility on that often instantaneous gut-response we frequently experience, which is based on a label in our mind? Society would certainly say we should! With the rise of Tinder-culture and capitalist competition, we are becoming more and more critical of each other (and ourselves). We are constantly finding excuses to judge each other into some sort of hierarchy—a common justification of choosing a partner based on looks, is that qualities which we find attractive in each other are due to the reproductive strengths they signal.

A popular example used in this evolutionary theory is body smell. There is erroneous debate over whether or not humans produce pheromones in a similar way to non-human animals, with some fragrance brands claiming to have bottled synthesized ones to help you attract a mate. However, since humans don’t have a functioning vomeronasal organ (what other animals use to detect pheromones), it would appear that we are attracted to certain odors for other reasons.

While there might be unique biological factors which impact a person’s scent, cosmetics tend to be so overloaded with perfumes that I would bet if we have an instant attraction or repulsion to someone’s smell, it’s likely that it just reminds us of a particular memory, triggering an emotional response. In fact, we might not always be aware of this, but a huge proportion of how we think we feel about something or someone has been conditioned into us.

Another demonstration of personal taste being a consequence of our programming rather than something natural, is society’s fluctuating preference over certain body shapes. In our fat-phobic culture, many people I’m sure would comfortably admit that they feel “unattracted” to fatness, without understanding the extent to which this emotional response has been conditioned into them. A similar evolutionary argument could be loosely applied—that a person who is “exceedingly fat” might be perceived by some mystical internal radar as being a less healthy mating partner, but the evidence is fallible.

If you are someone who believes that you are instantly turned off by fatness due to hereditary reasons, according to this theory, being “obese” is maladaptive only because it increases one’s likelihood of having other life-threatening conditions. To clarify, it is not the body shape itself which should be seen as unfavorable, but the comorbid diseases which this person surely must have too. However, if humans do have an innate sensor which is repelled by illnesses in our partner, then doesn’t it also mean that anyone who is not 100 percent healthy would likely appear unattractive to everyone, and never find a mate?

When we look back through history, trends in what was considered to be the most attractive body shape have varied vastly across space and time. Renaissance artists were the pioneers of taste culture, and in their obsession with objectifying women and futilely attempting to quantify “beauty,” they showed a clear preference in their artwork and writing for “fleshiness” and “plumpness.”  Yet over the next two centuries, with the white elite’s vicious propaganda to justify their enslavement of black people through dehumanization and impiety, the narrative changed. Plumpness was associated with blackness, and blackness was calculatedly associated with an erratic (and erroneous) lack of self-control, laziness, and low intelligence.

It’s curious how these same absurd associations are still partnered with fatness today, when in reality “obesity” is most often caused by institutionalized oppression and inequality—a lack of accessibility to affordable fresh food, a lack of education about health, and self-medicating suffering through gripping addictions to highly processed junk food. In rebuttal of the “fatness is bad for our offspring” debate, the majority of models today—our modern representatives of “beauty” standards—ironically have to starve themselves into a non-menstruative state. So, if we feel repulsed by fatness, it is not a result of some biological adaptation; it is the remnants of inherited aristocratic prejudice coursing through our veins.

Now, let’s talk specifically about body hair preferences. The general consensus that the female figure ought to come smoother than a Slip ‘n Slide surface is also not a result of our DNA. Science says that we developed body hair to stay warm and protect important holes from foreign intruders (that is, pathogens), therefore logically, the thicker the bush, the greater the chance of survival.

A revealing indication is that society has deemed it sexy for men to rock their natural state, yet anomalous for women to do the same. Spoiler alert: it is a patriarchal trend to poison targeted groups into submission by convincing everyone to view them as being innately inadequate in their natural state. It often infiltrates the minds of even those targeted, hence why so many women believe that their own body hair is unpleasant.

From the moment I hit puberty in the early 2000s, without even realizing it, I quickly internalized that the only acceptable standard for my legs, armpits, and pubic area was to be hairless. I was bombarded with adverts of women shaving already hairless legs, and not once did I see a female celebrity on TV with any armpit hair. The realization that I was going to have to battle against my DNA for my entire life held me in a state of insecurity and self-loathing.

It brought intense relief when I woke up to the industry’s real agenda and saw that our focus on judging superficial qualities in each other is just an unhealthy habit, drummed into us by capitalist society. With this, I commenced my hairy protest against the standards of attractiveness and beauty that had been forced upon me unwillingly. I took back my power.

It was a transition, and for the first few weeks I did not experience the ease that I do today. It took patience to change deeply ingrained beliefs. And it took even more time to grasp that liberation of self is only truly achieved by discarding our bullsh*t focus on skin-deep judgments—be that someone’s smell, body shape, or hair.

I am no longer worried about molding myself to fit anyone else’s requirements. A few years ago, I would have never imagined that I could ruffle my leg hair and genuinely love the feeling of it, but I do now, purely because it is authentically me. If I label myself as being not good enough, the rest of the world thinking I’m the epitome of Venus won’t matter.

I am now able to embody unconditional compassion, for myself and others. This manifests in epic forms, for example: I am able to throw myself into new tasks without fearing failure, I find socializing much easier as I am not focused on how I’m being perceived, and I have gained so much time and energy back, which I now pour into creativity.

Through rejecting what society taught me was beautiful, I have gained self-love, which is indisputably the most attractive quality that anyone can possess. 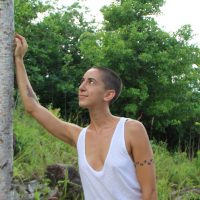 For the Women who know Beauty Standards are Bullsh*t, but Still Can’t love Themselves. You Have Hair Where?—Body Shaming & the Pressure to Shave.
See relevant Elephant Video