Mothers, Let your Daughters Grow Up to be Travellers.

My parents accompanied me to the airport, and, as I was in line headed for the plane, my mother said, “If you’re not back in six months, you’ll never see me alive again, and my death will be on your hands.”

Flabbergasted, I turned to everyone around me and asked, “Did you hear what my mom said?” They all wisely averted their eyes.

My parents survived that trip and many others. In fact, my mom lived to be 100 years old, so maybe I enabled her to live longer because she was curious to see what I would do and where I would go. And, of course, my mother, like most mothers, would often tell me that someday I would feel the same way when I had children of my own.

When I look back at it now, 50 years later—and with a 27-year-old daughter—I think that my mother did have reason to worry. In those days, there were not many young women in their 20s traveling alone through Asia, North Africa, and South America. This was all unfamiliar to her, and Stone Age communications didn’t help.

Back in the day, I would call collect every Sunday at 10 a.m. their time from wherever in the world I was and ask for myself, signaling that I was okay. I sent postcards (which I still have, yellowing in large scrapbooks), and very very rarely I would send a telegram, saying that I had arrived safely somewhere far away.

I needed to travel, even if it upset my family. My mom lost two children to polio three years before I was born, and she held on tight to me because she was never sure where her losses would end. But I needed to get some distance and to overcome my own fears, one of which was that I would be called upon to fear the world along with her.

Traveling alone was not easy then, nor is it now. And there were certainly times when I was alone and ill, sequestered in an awful room at night, too uncomfortable to be out on the streets by myself in some pretty shady places.

I think that I reached the nadir when I was doubled over with stomach cramps in Indonesia, trying to get to the airport and asking for help from a group of missionaries, who refused me. And yet…and yet…the feeling of accomplishment I had when I returned home, the joy I felt when realizing what I had done—nothing in my life compared to that.

I would happily have traveled with a friend, but no one I knew wanted to go where I did or how I did. As I told my daughter years later, you can’t wait for someone to share your travels—either you go alone or not at all.

And my relationship with my daughter would never, I insisted, never be like my mother’s and mine. The last thing I wanted to do was clip her wings.

I carried William Blake’s poem in my heart:

He who binds to himself a joy
Does the winged life destroy;
But he who kisses the joy as it flies
Lives in eternity’s sun rise.

I sold the joys of travel to my daughter from the time she was a tot. First, we traveled around the United States, and then, when she was two years old, my husband and I took her to France, then Ireland, then Poland, then Mexico. She enjoyed traveling, and when she was in college, she took a semester abroad in Prague.

She got a film job immediately out of college that required her to work in many different countries—Russia, Mexico, Sweden, and, eventually, to places in the Middle East. The films she worked on included stories about the drug trade or the faulty jail system or political extremism.

I was fine with it; I told myself that she was always with a film crew and she always had people from that country to help with transportation and translation. When some of the places she traveled to ended up in the news because of bombings or state department warnings, I tried not to dwell on the dangers.

My daughter has traveled alone, just not in the way I did in my day. She lived for a year on the opposite coast. Recently, she decided to move by herself to a European city for a year.

I worry about her when she is near, and I worry about her when she is away, but I trust her intelligence and wisdom and always support new experiences for her. I can see how she has blossomed from every trip, every new country, every opportunity to talk to people and to see for herself what the world is like. Because travel changes people—it did me, I am sure. Overcoming fears, taking a chance, trying new things—they all expand our understanding of ourselves and of the world.

I do find myself thinking about how I’ve always proselytized for travel. I ask myself if the world has changed for women who travel. Does familiarity with a country from online research and chats with friends enable women to feel or be safer when they travel, or do they assume that they are safer because of technology and are therefore less on their guard? Does the political climate around the world add to the dangers of travel for women, or are they merely publicized more than they were before?

My mother was right; I worry about my daughter. But I would never tell her to stay put because of me, nor do I want her to. I share her difficulties and setbacks, and I share her joys in what she discovers.

I hope that travel gives her hope in the world and the ability to navigate its fascinating shoals and depths. 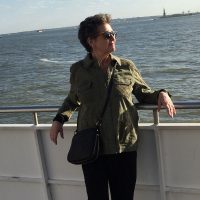 Barbara Winard is a 71-year-old woman who has just begun a blog entitled thebabybloomer.blog. She is writing about mindful travel, travel while older, solo female travel, and … Read full bio