How to get what we Want: Advice from a 5-year-old. ~ Shilamida Kupershteyn

One Sunday morning, my family was under the weather.

While laying in bed, I hear my five-year-old talking to himself in a really determined manner. He was on a mission, and I had no clue why. However, he sounded entertained so I wasn’t worried.

He was talking loudly, then singing, and then the lights went on in the hallway. He sounded like he was working hard, but still, I was too tired to go see what was going on. Finally, he came into my room and asked me for help. I told him I had a headache and would help him later. I then heard him go downstairs and ask Daddy for help, and he said no too.

He came back up and continued on his journey of whatever it was that he was doing. When he was finished, he came into my room, and I asked him what he was up to all of this time. He said, “Mom, I want all new “Toy Story” toys. So, I emptied my entire room to make room for all of my new toys!”

I later went and checked what had happened while I was resting, and sure enough, he cleared out every toy, stuffed animal, and 80 percent of his books (that’s probably when he asked for help because there were a lot of books!). I went to his little brother’s room across the hall and saw that his brother had inherited all of that stuff.

The moral of the story is that at five years old, he knew enough about energy and manifesting to understand that if he wanted the new toys and books, he needed to clear out the stuff occupying the space. It also didn’t hurt that he donated all of his beloved toys to his little brother. Genius!

Early on in my spiritual studies, I learned that if I wanted a man, I had to clear out space in order for there to be room for him. If I wanted money, I had to live within the means of having money. So, when I was asked to donate money, I had to give as though I had it in order to summon the universe into thinking that I already had it.

So, I decided to try it. I hired a professional organizer to come in and help me clear out my apartment, and I swore that whenever I was asked to donate, I would. To this day, I donate money to the Lakota Indian School—probably because it was the first opportunity that came in the mail after I made that vow. After all of these years, I have continued to give to them to remind myself of where I started.

Shifting my energy is how we receive what we desire. Clearing out the clutter around us makes room for the good that we are requesting from the universe.

We need to give in order to receive. That little genius of mine totally gets it.

Children are our greatest teachers. Pay attention to the kids around you. Watch how they live and survive. Mirror their actions and live in a carefree state of mind like them, and you too will see a massive shift in your life.

What will you give this week in order to receive? 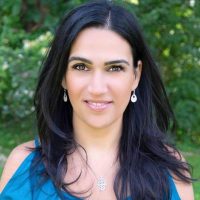 5 Hacks to get your Life back into Alignment. ~ Sydney Campos
See relevant Elephant Video