The Night that Changed Everything.

I have put off telling my story in full detail.

But, I know this message needs to be shared—for me to fully heal and let go, and for other families who will find themselves in the same situation.

Let me backtrack a bit. I am a single mom of a beautiful 15-year-old. I have been single since her birth.

Mooks, as we like to call her, was never an easy child. She struggled in school, and after much perseverance, was diagnosed with SPD (sensory processing disorder). In a nutshell, it means anything affecting her senses can put her into a state of overwhelm. Crowds, noise, and even the ticking of a clock in a classroom—all of this can overwhelm her.

When Mooks is overwhelmed, she retreats to her room as her safe place. But when she was almost 14, she began to withdraw more than usual. She would hang out in her room, and sleep a lot.

I wouldn’t often see her, but remembering what I was like as a teen, I didn’t worry much about it. I started to plan family brunches at our house, to surround her with love and joy. We would pop into her room, or she would come out for a bit at a time to visit. I knew that going to high school was a hard transition for her, that she was finding her way.

This was our reality for quite a few months—Mooks struggled, while I desperately wanted to know how I could help her. I kept hoping that she would burst out of the place that she was in.

I remember the night that changed everything quite clearly.

I received a text from my daughter’s best friend, saying, “Anna, Mooks is going to try to kill herself once you go to bed.”

How is this possible? My thoughts raced through my head. I’ve since learned that the brain is not set up to process suicide, as it struggles to grasp and understand what exactly is happening. This is so true—I must have asked her friend five times, “Are you sure?”

I went into my daughter’s room to check on her, in hopes that her friend was mistaken. I still had a hard time grasping the magnitude of what could occur.

I asked her if what her friend told me was true. Mooks told me, “No.”

Well, that’s a relief, I thought at first…but my mama’s gut grabbed a hold of me, and I knew at that moment, it was true.

I asked my daughter to hand over her pills and she gave me a handful; I asked for all of them, and she gave me more. Feeling shock, I told her I loved her, and that we needed to get her help. Her friend called the police for me because I couldn’t make that call. I wasn’t ready to admit that she wanted to take her life—calling would have made it all too real.

Even when the police came, I was numb and not ready to believe it. I looked at my child being escorted by the police (for her own safety) to the hospital and I felt deep shock and deep sorrow. At that moment, I felt I had failed. I’d let my daughter down. I must have done something wrong. Maybe it was being a single mom that did it.

My mind began to race, but I knew I needed to stay calm and focused. It was a long wait in the hospital after arriving at about 11 p.m., and at 9 a.m. the next day, she was admitted to the Mental Health Ward for Children/Youth. The plan was to have her assessed over the next four days.

When the doors closed behind her and I was left watching her go, it all hit me in an instant.

I cried so hard, I believe I was wailing, with snot running down my face as I heaved those big sobs. I was shattered. I knew deep down I needed to collect myself, that this wasn’t about me. I needed to be there for my daughter, who needed me now more than ever.

I went to the lobby to call my parents to let them know. This was one of the hardest things, as sharing it made it real. I didn’t know what I expected—maybe judgment, maybe for them to say what I was feeling: that I’d failed my daughter, that I sucked as a parent. That being a single mom caused this, and it was all my fault. Maybe they wouldn’t be home, and I could leave a message. No, that isn’t a message you want to leave.

They did answer, though, and said not one thing against me. They asked how they could help and what they could do. This was a lot better than I’d hoped. Perhaps it wasn’t so much my fault?

The next few days, I ran back and forth to the hospital, bringing food, hanging out, and watching movies. It broke my heart to see her, but I vowed to stay strong to help her heal. I was on an emotional roller-coaster of trying to understand why, and putting into place a safety plan so it wouldn’t happen again.

On one of my trips home, I got rid of any Tylenol and pain medicine we had. I also hid some of our sharp knives and our razors. Mooks had also been cutting herself—her arms and legs showed signs that this was recent.

When she was released from the hospital, it was only the beginning of what was going on for Mooks. It was almost like the hospital was the start of a volcano that was erupting.

When I think back, it’s almost like she was being pushed through a gate into a huge, new chapter of her life, allowing her to seek out who she was.

Many times, I didn’t recognize her. She would leave the house in the middle of the night and refuse to tell me where she was. She began drinking uncontrollably, doing drugs, and not going to school—as if she was trying to kill herself in other ways. I think the longest period of time she was away was four days. I was a mess, not sleeping, and worried sick. At times, I wasn’t sure if I was sad, angry, overwhelmed, or all of the above.

The greatest lesson I learned during all of this was to love my daughter as she was.

I let go of the dreams I had for her, and also let go of who she once was. I needed to love her as she currently was, in the mess she was in. I had to let go of my pain and sorrow and focus on her.

To say our life has changed, that it was a challenge, is to put it mildly. I had to give her space to figure out her path on her own, while giving her some sound advice and the tools to guide her. Many times, I didn’t sleep at night. I’d often tiptoe into her room to see if she was breathing. I was a walking zombie. I had to drop everything and work from home. I needed to let my daughter come first, and show that she mattered more than anything.

About six months later, when I felt we were out of the danger zone, I took some time for me to mourn, and accept my new reality. I wept, I journaled, and spent a lot of time in the woods screaming. I needed to release all that I felt.

Fast forward a year and a half later, I am present more than I have ever been and Mooks is now radiant.

She is mature, and appreciates all that life has to offer. As I was writing this, she left to spend time volunteering at a barn, and to ride horses with a good friend of hers. They are hoping they can spend the night sleeping in the barn.

Yes, our lives have changed, and we still have a few hiccups in the road, but I can say that Mooks is in a much better place this year.

The one thing that I have held onto through all of this, and that I want all parents going through similar trials to know is:

We haven’t failed our children, nor have we caused them to want to take their lives. It isn’t our family situations, nor is it anything else we did or didn’t do.

This isn’t our fault.

The biggest, best advice I can pass on is to love our kids right where they are—in the joyful times, and also the messy times. 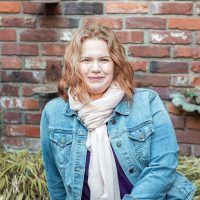 Anna Milne is a mom to two daughters and three rescue cats. She lives in Victoria, British Columbia, and spends her time enjoying the outdoors and being with her family. She e… Read full bio