I’m a Meditating Yoga Teacher who Swears (a lot)—& I Don’t Need your F*cking Judgement.

I always felt a little cheated because even though both my parents spoke Italian fluently, they never taught us the language.

They had their reasons I guess. They both started school here not speaking English and being picked on and bullied, and they didn’t want that to happen to us. Or maybe it was simply so they could talk about what they got us for Christmas right in front of us.

But I realized the other day that I do speak a second language. Unfortunately, it’s swearing.

I know what you’re thinking—that’s not really appropriate. After all, I’m a 65-year-old yoga teacher and studio owner, and a grandmother of three.

I went to an all-girls Catholic high school and the lack of boys somehow loosened our filter. You would think an all-girls school would make us more ladylike, but no way in hell. It was just the opposite.

I helped raise four boys, who during their teen years dropped f-bombs regularly, but in a loving way. We started the swear jar during those times, but I was the one contributing the most. I wasn’t a very good role model apparently.

I do confess that, on occasion, I unintentionally slip in a low-level curse word or two while teaching a yoga class. It is my second language after all, right before Sanskrit. I haven’t been called out on it yet—still waiting for that.

Let’s be honest here folks, cursing can be used as a noun, verb, or adjective. It can express joy, or fear, or sadness.

When my oldest son was diagnosed with Hodgkin’s Lymphoma, “Oh darn” just couldn’t express my shock. It was more of a “Shit, are you serious?” kind of moment.

When my youngest son was diagnosed with Hodgkin’s Lymphoma, my response was “Damn it, not again.” And when his cancer came back within a year and he had to go through chemo again, along with a stem cell transplant, it was “What the fuck! This can’t be happening.” But it was.

And when we lost my oldest stepson four years ago from a massive heart attack at the young age of 37 while serving aboard the USS Essex, I didn’t swear like a sailor. In fact, this was the one time I was at a loss for words—any words.

Most of the time, my yoga and meditation practices help with the emotions and feelings; other times, it just doesn’t cut it and then I resort to my second language.

I am a vegetarian who doesn’t smoke, drink alcohol, or use recreational drugs. And I don’t consume caffeine or pop—I’m strictly a water and tea gal. I practice yoga and meditate twice a day. It might sound boring, but not to me. But please don’t judge me for my second language and I won’t judge you for eating meat, drinking, smoking, using recreational drugs, and needing caffeine just to get through the day.

I even have a swearing mantra: “Fuck, shit, damn it, son of a bitch!” I use this when things really go south; physical pain is usually the trigger.

I remember that one of my first teachers told me that swearing generates bad karma. I hope that’s not true, because if it is—I’m fucked. 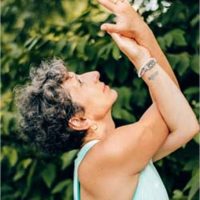 Osho: F*ck the F*cking F*ck. Why we should be Saying “F*ck” in front of our Children.
See relevant Elephant Video