How Women Play a Role in the #Notallmen Issue.

How many women have faked an orgasm?

How many mothers have scolded their boys with, “boys don’t cry?” We, as a society, have raised these men. We, as a society, are responsible for these harms. They are the outward manifestations of a collective subconscious that has been sick for a long time.

My intention with this piece is to shed light on how these damaging sexual encounters actually go down, and the harm that males, in addition to females, have suffered from the ways in which we all relate sexually.

If we don’t express our needs, we don’t give the other person the opportunity to rise up. We set them up for failure, and let them fill in the blanks with what they want to tell themselves in the moment.

I believe it is important to distinguish between these collective confusions—or destructive collusions—and actual predators. I fear that lumping them into the same category (for example, equating Aziz Ansari with Harvey Weinstein) and vilifying all men (similar to the comment Matt Damon was torn apart for), is breeding a society of angry, ashamed, and outcast males that will lead to more toxic behavior (such as when this shame finds an outlet and exaltation in the Jihad or white supremacist movements), rather than creating a forum for discussion and understanding.

The vast majority of men want to be good, want to make women happy. Women are entitled to justified anger, but I believe it can be directed in a more positive manner. I have attempted to become sober with myself about the parts of me that have experienced things that were not black and white, and have found compassion for the males who have experienced similar confusions (those I once labeled abusers—in order to assign blame to an internal experience).

In owning this, I’ve found liberation from the victim mentality. The truth is, we have all trespassed against each other, but more frequently, ourselves.

The purging was necessary, but now it is time to heal.

What is this you carry with you?
And could you put it down? It’s not sure from where you brought—and yours, I’m sure it’s not.
No, it can’t be sent with me—I have a story in the stead
A fairy tale, a fetching yarn, so rest your bones and rest your head.

The journey of a little bird, begins trapped in a cage;
by sickness, slumber, smarts, and wonder
Hiding in the dark

Girls grow older
boys much bolder
curiosities do peak
Boy seeks friction, she some feeling
lies told this is the way,
by sickness, slumber, cheapened under
Sheets within the dark

Her voice won’t speak of what she wants;
he thinks it’s all for play
The feeling’s got, not one she wants
Dirty and afraid

Now he feels a twist of gut
Of what, he can’t explain
The years make clear she was in fear
Boy, conditioned to avoid; Girl, tangled in the shame
attention sought; thinks it’s her fault
Rage trickles down her veins
At family, programmed to teach
Not sex but only what they preach, in pervert factories.

He and she, now from two worlds, and words they can’t relate
For when you do not care for you, a monstrous man you shape.

You see, my dears, there something here, for you to understand—
Reckless selves make reckless others, no vic or perp to blame
Confused, reliving parent’s drama, expensed against another’s trauma.

Until one day someone said to her…
These things happen for, not to, you girl
Your story’s old, there’s space no more,
to store their memories in your wells.
It’s in the strife that makes this life
So I need for you to see
Those vicious cycles borne to you and how to set them free.

For from the wreckage leaders come
Grateful for the war
If only you can weld, survival into thrive; alchemize and paint, a new plan for your life.

The power’s shifted,
change is near,
and time we can’t afford—
for us to be, subconsciously
Stuck within the dark.

So I ask you now to bridge the gap
Let man and woman speak
Just how it felt to stir and stew
lust within the hate; putrefy and store inside,
words too crude to taste
Rewrite faults of His story
And tell each other dreams
of norms reformed, lessons learned,
and how you wish to be
Brought in from the dark.

Remember when, we loved our men
and masculinity
meant consciousness and care to take
a woman in his arms—
containers for
us to explore
the depth that is inside.

Women—it seems we have forgot—
as femininity we hold the key, to softening the thought.
You call it burden, not fair, unbalanced
but whom else have we got?
To lead us from the dark.

You, your own sweet formula. Somehow stuck within the facts.
Let those pass right through you
Be the Equation, not the acts.
So let this go, make room to know, the stars within your map
Of how together we may bring, a healing of our path.

Where is it you want to go? The course you must steer right.
For you, my darlings, are the world—
The shepherds of the light. 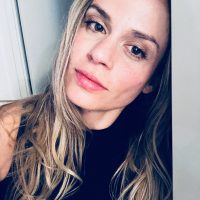 Nicole Sollberger is a former “Big Law” entertainment lawyer, with a J.D. from UCLA and B.A. in Communication Studies from the University of Southern California. She now i… Read full bio

Image: The Perks of Being a Wallflower/IMDB

Not All Men are Bad (& 9 Other Lessons for Women). #MeToo: Healed with One Apology. I asked women: “At what age were you first sexualized or abused?” This is Our Story.
See relevant Elephant Video