If you’ve ever found yourself unhappy in any committed relationship, it may have crossed your mind once or twice.

You think, “There has to be something better, something that could make me feel happier/content/alive out there.”

Even if cheating is not on your radar and you wonder “How could anyone do that?” then you’ve most likely never lost yourself in a marriage before.

We had four beautiful kids—two boys and two girls. He did shift work and I stayed home with the kids. I can’t seem to get over the fact that on a daily basis, over and over, I did all of those seemingly mundane tasks. I’d walk around with spit up on my only clean shirt. I’d pull chunks of hair out of my head while I tried to pee alone. I remember feeling like getting chicken nuggets into the oven was a big deal—the biggest accomplishment of my day in the life of a mother.

I didn’t hate being a mom. I didn’t like that I was forgetting who I was.

Somewhere over the years of being a mother to these four loves of my life, I had lost all sense of who I was as a person. I had nothing to call mine anymore (except for my beloved tea, which I refused to let them drink, even if it was cold) including any recognizable qualities within me. Even the toothpaste-spattered mirror reflected back to me someone completely different—a stranger with swollen eyes.

I no longer felt like a woman. My breasts were only used to dispense nutrition for my growing babies, and they were sore. Sex with my husband became non-existent, mostly because there was no time left, I was too tired, and I felt disgusting. I lost all interest and we lost the spark we had early in our relationship.

I felt like a single mother most days, and it seemed like so much effort had to be put into everything I did. I could feel the buildup of resentment over the years. It began to eat at me like a lake leech who refuses to let go.

I woke up one morning in April, 2013 and felt something was coming. It might have been that I had to pull small objects out of my toddler’s nose again. But the final straw happened after I had managed to vacuum the entire carpet and my six-year-old son had a tantrum of Hulk-like proportions and threw an entire box of teeny tiny building blocks all over the living room.

That was all it took to break me: Lego.

And that was the moment—the life-altering, audible snapping in my brain moment that shifted my entire being. I silently sat down on the couch and took in every feeling that arose. The storm that had been brewing inside of me was now a full-force hurricane. I transformed into a different person that day as I looked at the mess on the floor.

I can only describe it as an undoing. A stripping away of the person I was minutes before. A whole new person emerged with one desperate focus: do whatever it takes to find a way to feel alive once more.

That also included no longer caring what it was. No longer caring who I hurt, what I destroyed, or what I had to do to find it. A portion of my brain shut off. The part that governs logic, integrity, and truth. It sought out its only mission, one that no longer included making my children my number one priority.

I did consider jumping out of an airplane. I tossed out the idea of running away to a remote island—only because I lacked a passport.

Then I got the idea that I could find myself again and become alive with another person. It came to me like the biggest relief you can imagine, like that first breath you take when you’ve been underwater two seconds too long. I had been drowning in diapers and despair for two minutes too long.

And so I decided I was going to cheat.

It was my only option.

I could have had lengthy conversations with my spouse about my unhappiness—which would have been the obviously better choice—but I just didn’t care. I could have not left my kids with all those babysitters to sneak out with him. But I did.

I cheated because I was lost. I felt so much loathing for who I had become. I could no longer face the sadness within me, and so I began to seek solace and validation in another man. My husband was not going to cut it—he was busy, after all, making money and focusing on keeping a roof over our heads.

I cheated because I felt like it was a way out of myself. I hated who I was. I didn’t want to feel the pain of losing me. I simultaneously cried for my old self and pushed away the grief of losing who I thought I was. I cried for the mother in me who didn’t feel good enough, who didn’t think she was doing a good job raising them.

I cheated because I didn’t love myself.

Here is why I wouldn’t do it again:

Today, I am not that woman who feels like there is some feeling or person out there who can “fix” me. I am not broken; I am whole.

Today, I remember that I can let go of my need for perfection. I don’t need to have a sparkly home with spotless floors anymore and it’s okay to leave some toothpaste in the sink.

Today, I am willing to face myself in a mirror and what I see in my refection is a woman who did her best at the time with the wisdom she had. This woman staring back at me is wiser for her mistakes and forgives her bad choices.

Today, I wish to be an example for other mothers who may be struggling, who are deep in their Mom-ness—full of loneliness, in survival mode, and being on the brink of losing themselves, too.

Today, I am letting go of shame.

Today, I can see that my decisions back then do not make me a bad person; they make me human.

I now know that everything I need to feel joy, love, and happiness is all inside of me and I have the ultimate power: choice. Power to choose to love myself now. The power to do the work on myself every day to become more of who I authentically am. 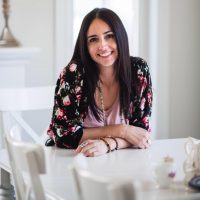 Jen Abra is a mom of four kids and a wife. She quit her job as a Kindergarten teacher to follow her passion of connecting to the spirit world. She is an author of a book on in… Read full bio

The Best Explanation of Cheating I have ever Heard. Why we Cheat & Why we get Cheated On. Cheating: 2 Uncomfortable Truths about it that We Need to Hear. How to release the Shame of having an Affair.
See relevant Elephant Video