Finding the Courage & Freedom to Use our Voice & Speak the Truth.

Recently, I heard an NPR story about a woman who loves to sing.

She lives in Somalia where some years ago, religious fundamentalists banned music from the radio and any singing in public. A number of musicians were actually hunted down and killed by these extremists.

The story was about how this woman liked to sing in her kitchen—a simple pleasure—despite knowing that local leaders were out to stifle any creative expression, effectively silencing any opposing voices to their rule. She recounted how she used to avoid open windows when singing so she would not be heard outdoors and reported to local authorities.

Several years passed under this type of regime until a show modeled after “American Idol” came to her country, putting out a call for interested people to audition in the capital.

In defiance of existing laws, many risked their lives to travel to the capital for an audition, and she somehow found the means to be one of the contestants. While she did not win the competition, the program gently re-introduced ideas that had been taboo in her community, and over time, most likely from the success of this show, the governing body relaxed its rules.

The competition has continued and in this way, social rules about music have started to soften. Even now, she sings softly in her kitchen, aware of her surroundings and the simple joy of song.

This piece reminded me of the power and cost of speech.

Free speech has always had a cost, and historically, it has been writers, painters, musicians, and others in the creative arts whose voices have challenged power. To that extent, many have sacrificed their freedom or even their lives to shine light on injustice for the rest of us.

Only last year, a Saudi Arabian journalist living in the United States, Jamal Khashoggi, who wrote critically of the Saudi Arabian government, was murdered in an embassy in Istanbul. We have yet to condemn or properly hold accountable those responsible for this heinous crime or to call it what it was: an attack on the free press.

This has significant consequences for all countries but especially in the West where we have taken the freedom of speech for granted and hardly protest the inflammatory language the current administration uses to describe journalists. The Bill of Rights boldly names a free press as an essential balance to government.

As a yoga teacher, I have a precious freedom to speak what I feel is true. I am not controlled by an outside agency, and if students do not engage with the message they hear in class, they are free to find other venues to practice.

And yet, as the late Toni Morrison said, “the function of freedom is to free someone else.”

If we who suffer little reprisal when we use our platform do not take these opportunities to give voice to injustice, how does that honor the many who have sacrificed for us to be able to stand on that platform?

In yoga philosophy we are taught that we are one, and yet we all have different access to many freedoms.

The fifth chakra, located at the base of the throat, is the source of truth and represents our ability for creative self-expression. It symbolizes the ability to speak our truth and the courage and freedom to do so. It signifies a clear and resonant voice. Developmentally, the ability to speak our truth and define our own set of beliefs arises from this chakra. Conversely, it represents our ability to listen to others mindfully and with comprehension.

How often do we taken this right to speak for granted?

How often have we lacked the courage to speak, knowing we will suffer few negative consequences, if any?

How often have we lacked the courage to live our convictions?

How often have we failed to speak up for those who have no voice?

Our clear, resonant voices release what we hold inside. The throat serves as a portal from our vital organs to our thinking selves. We can open, close, or even vary how much truth is released, whether one is a woman singing in a kitchen across the ocean or an esteemed journalist spreading the truth about abuse of power.

We step into our power in our own way, but as yoga teachers, what are we called to stand for? To speak to?

Some say that singing is like praying twice. We are fortunate to be able to explore these subtle energies in the body and to be able to use our position in life to create more justice for others. However that manifests in our lives and communities, we must remain aware of the many beings in the world whose risks are more significant than ours.

Those who stand up, speak out, write, teach, minister, and support inspire me to see where I can live with more clarity and courage. 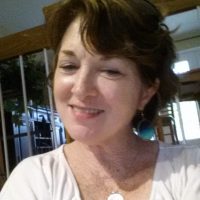 In This Era of Alternative Truths & Bullying of the Press, We Need Journalists like This.
See relevant Elephant Video