Vote like your Life Depends on it—Because it Does. 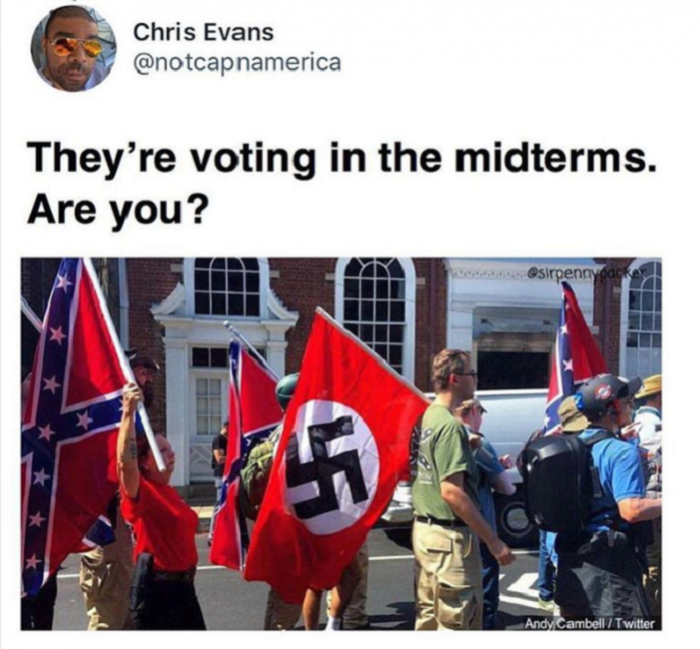 The coming election is likely to be the most important in our lives, because it is likely to determine whether America continues to function as a democracy.

And if America ceases to function as a democracy, our lives will change dramatically.

This election is likely to determine whether America remains a democracy because Republicans control all three branches of government. And they have shown they will do whatever it takes to stay in power: gerrymandering districts, purging voter rolls, closing polling places, stealing court seats, and inviting rivals to hack elections.

But if Republicans win big, they will take it as a mandate to push through the rest of their agenda.

The end result is likely to be something akin to a one-party state, whose dissenters are punished by an increasingly tyrannical leader and conservative press, as conservative critics leave office and freedom of expression in conservative communities dries up.

But we should also expect criticism of the president in more mainstream circles to diminish as well.

Libel laws are likely to be tightened and news outlets critical of the president selectively prosecuted, as Trump has already sought to do. And more journalists, like Washington Post columnist Jamal Khashoggi, are likely to be threatened and killed.

The end result is likely to be a climate of fear, leaving the strongest criticism to the most marginal and daring, who are increasingly hounded and harassed by trolls.

Free speech is likely to be more intensively policed by militant Trump supporters, whose threats of violence can already be seen in the curious absence of anti-Trump T-shirts and bumper stickers in even highly liberal cities. But if Republicans win big, expect friends and family to become more brazen as well.

America may come to look less divided and more fearful and repressed, with critics of the president being treated more like dangerous radicals from whom friends keep a distance. Associating with a writer like myself, for instance, may come to be linked with getting your Facebook page hacked and attacked by trolls, who expose sensitive personal information and threaten you with violence.

Meanwhile, America may come to resemble a third world country, where regime supporters enjoy special perks, as criticism of the regime is constrained to ever smaller and more private forums, policed by fascist supporters, who the president can unleash at will, like the Republican terrorist, who just sent pipe bombs to several Democratic Party leaders.

Republicans are likely to continue removing constraints on big business and campaign financing. They are likely to deepen their tax cuts for the rich, while cutting programs for the poor. And their policies will begin to effect us personally, not just in the way we are educated and the health care we receive, but in the shape of our families and our conceptions of life itself.

Authoritarian governments almost always create authoritarian societies, because the state is like a control panel, setting the conditions for all other social institutions. Ultimately, the state shapes the way we relate to one another through the laws it crafts and the tone it sets.

This is why people almost universally experience more freedom in free societies, where they can freely elect their representatives, freely speak their minds, and freely assemble with whomever they please. These freedoms provide the sense of security needed to explore what we value most and to experiment with the kinds of lives we want to live. But they also protect us from those who would use their power to put us in our place.

Perhaps the most practical value of democratic institutions lies in protecting common people from the ravages of a state whose primary purpose lies in funneling resources to the people who control it.

If Republicans win big in the midterms, we could find ourselves living in an authoritarian society, where people are increasingly expected to do as they are told and not rock the boat, while the people in power loot the country’s resources.

And if you think the last two years have been an anxious time of friction, the worst may be yet to come.

If America ceases to function as a democracy, we should prepare ourselves to live in a harsher and more authoritarian, more unequal, and more corrupt society. But the stakes are far higher than the fate of America; for if America falls, countless democracies, which look to it for support, will also fall with it.

And a world of autocrats, using racism and nationalism to distract attention from the issues that matter most, could not begin to take on climate change. Hence, if America falls, global civilization may well fall with it, along with the biosphere and a massive portion of its millions of species.

And if the results of early voting in key states are any indication of where this election is heading, the prospects for humanity are dim.

Vote like your life depends on it—because it does.

Vote like the world is hanging on a thread above a vast abyss, and that the fate of the planet lies in your hands—because it does.

Vote like we hold the power to make the world anew, if only we band together and do what we know to be right—because we do, and now more than ever.

It is Time to Dream Big Again—and Vote. If you care about _____, Vote. 3 Steps to Forever Cure your Electile Dysfunction. It is Time for Liberals to Get Up Off the Mat. Before you Vote, just Remember One Thing.
See relevant Elephant Video