Since I started posting photos of my yoga practice, I’ve received quite a few questions about how I began doing yoga and if I have advice for those looking to start practicing.

I’m certainly not an expert, but here’s my yoga origin story.

I think it’s really important for me to say that my first yoga experience was hell on Earth. Are you hearing me? HELL. ON. EARTH.

When I was 16, my aunt encouraged me to join her at a Bikram yoga class. For those of you who have never tried it, Bikram is a series of 26 postures performed over 90 minutes in a very hot room. How hot is very hot? Roughly 105 degrees. And when you are a whiny high school student being forced to spend your summer vacation in a sweaty and stiflingly hot yoga studio instead of camped out on your aunt’s couch watching her endless supply of VHS tapes, one 90-minute yoga session will quickly turn into a nightmare.

I don’t remember much about that initial class except that my dramatic antics during and afterward resulted in restorative Cook-Out milkshakes—for both me and my aunt. Needless to say, I spent the next several years being staunchly “anti-yoga” (whatever that means).

It occurred to me that most non-North Carolinians probably don’t know what an excellent calming mechanism a cold Cook-Out milkshake can be. All I can say is, in my best sorghum glazed drawl: “There ain’t one better.” I recommend banana puddin’ flavor—you’re welcome.
~

While attending graduate school in Winston-Salem, one of my friends encouraged me to purchase a month-long unlimited pass Groupon to our local Bikram studio. I was skeptical given my previous Bikram experience. However, when I realized that many of my original problems with the practice originated from unadulterated teen angst, I decided to give it a second chance. Even though my first few classes were extremely intense (i.e. inconsistent breathing, drinking excessive water, premature exhaustion), I was intrigued by how self-satisfying the practice could be.

Unlike other physical activities, yoga awakened my spiritual curiosity even when I was pressed against the boundary of physical exhaustion. I attended several classes during that introductory month, and I eventually began a work-study at the studio where I was allowed to help with maintenance in exchange for free classes. When you’re a broke graduate student, programs like this are a lifesaver and I can’t express how grateful I am to the awesome staff at Bikram Winston-Salem for allowing me to practice even when I couldn’t afford to pay.
~

When I moved to Durham last year, my yoga practice slowed to a halt because, once again, I was financially challenged and couldn’t afford drop-in rates at Durham’s more expensive Bikram studio. Even though I was occasionally attending hot yoga classes in the area, I was still not practicing nearly as much as I wanted. However, this turned out to be a blessing in disguise—without a yoga class to rule my schedule, I was able to establish a home practice (after living in Durham for nearly a year—laziness is a drug, y’all).

I rooted my home practice in my favorite selections from the 26 poses which constitute Bikram yoga. However, I quickly realized there was a whole world of postures I could try and that I didn’t necessarily need a class environment to progress in my yoga practice. I developed a pattern—discover cool new yoga poses via the vast online yoga community, obsessively research them using Yoga Journal online, and then practice YJ’s suggested preparatory positions before focusing on “mastering” the new pose.

Between you, me, and my yoga mat, I would never claim to have mastered any yoga poses. I have, however, made substantial progress with a dedicated daily home practice. It’s the one part of my day that is completely devoted to my mental clarity. Believe me when I say that I’m not really in this for the health benefits and the exercise—I am addicted to exceeding my personal expectations.

I know it can be intimidating to try out a yoga class if you’re a novice and especially if you’re a curvy novice. However, I would encourage everyone who thinks they may want to begin practicing yoga to start by researching highly rated yoga studios in your area. Don’t just go with the first studio throwing around free guest passes—look for a studio whose teachers are recognized for being encouraging and positive. The outlook of a yoga teacher has just as much of an effect on your practice as the clothes you wear or the amount of water you drink. Once you find a studio, give yourself at least one week of classes, consisting of at least three classes before determining if you want to continue.
~

If you’ve never tried yoga, your first class might be a little more intense than you’re expecting, which might lead you to set fire to your yoga mat and curse the whole practice to hell.

However, if you give yourself at least one week, you are actually giving your body the opportunity to get acclimated and enjoy its new activity level. In my opinion, it is best to begin practicing yoga in a class environment so you can establish a firm foundation of pose knowledge and get helpful feedback. That being said, I am well aware that many people have never attended a formal class and develop a strong foundation without feedback. Personally, I am not one of these people but to each her own.

No matter what you decide, the most important thing you can do is not be disappointed in yourself, especially if your disappointment stems from body dissatisfaction. Legit, I have personally witnessed professional Bikram instructors get their asses handed to them by the yoga practice they guide people through on a daily basis.

Believe me when I say that using your personal body issues as an excuse to avoid yoga is a serious disservice to your well-being.

Get your copy of Jessamyn’s book, Every Body Yoga: Let Go of Fear, Get on the Mat, Love Your Body, here.
~ 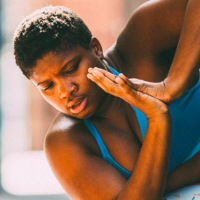 Jessamyn Stanley is an award-winning yoga instructor, intersectional activist, and author of Every Body Yoga. She empowers her audience of over 520k, to break down barriers: … Read full bio

Image: Author's own by @zoelitakerphotography