You aren’t a true Christian if you support a Racist, Bigoted, Sexist Egomaniac. 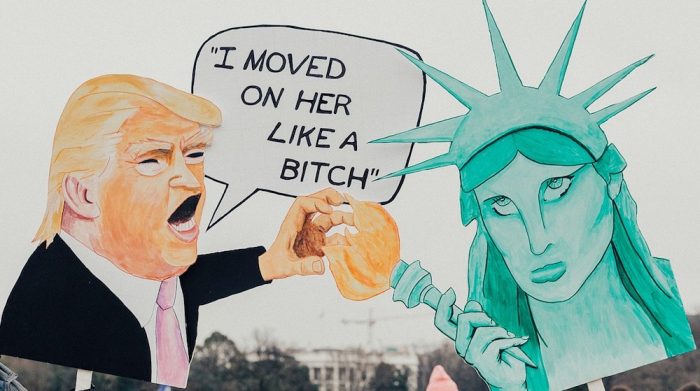 I was raised in the culture of Evangelicalism, of Yes, Sir and God bless him and Pray for your leaders and God moves in mysterious ways, even through evil people.

In this culture, the leaders were always right—until the damage had been done, and even then the wounded often slunk away with heavily taped mouths.

I was raised not to question authority, to call a kettle white when it was black, or keep your mouth shut and pray. I was taught that obedience was respect. I was taught not to disagree.

I was also raised, in part, by a man with a rebel streak who attended a fundamentalist bible college. As legend goes, his first day he sat in a class where the professor detailed the extensive list of college rules—the people students were allowed to associate with and those (anyone outside the college) they were not, what to wear, how and when to interact with the opposite sex—and he looked around the class, chuckling heartily. The laughter eventually died off as he noticed no one else was joining in. He rose from his seat and marched to the president’s office, where he burst in and said, “I thought all the pharisees died in the second century, but I see they’re alive and well here in Watertown, Wisconsin.”

I was born with that streak in my blood, too. And not until the final gash, when my blood poured out, did I begin to find my rebel voice.

I left behind Evangelicalism and Christianity several years before Trump was elected president. Still, it remains a gut-wrenching mystery, to this day, how so many of the people who claim to follow the teachings of Jesus have aligned themselves with a raging, racist, bigoted, sexist, xenophobic maniac. I may no longer be a follower of Christ, but there couldn’t be a bigger divide between his teachings and the ideologies of the man-child in office.

I don’t understand how millions can’t see that disparity.

And maybe that’s partly why, when I spoke out during the last election and continue to speak out today on the dangers of his character, without sugarcoating anything, I cringe when I’m met with tight-lipped silence. With carefully measured speech. With “Yes, well, we just have to be praying” or “Obama was just as bad.”

And I cringe when I speak out about racism or any kind of injustice in America and am met with “Yes, our country isn’t perfect, but I still love it.”

Because, to me, it’s all the same as where I came from. Confusing criticism with disrespect, telling the truth with slandering, taking a stand with being divisive. Giving abusers the benefit of the doubt. This idea that we have to carefully pad our critiques in compliments is no longer in my blood.

I know plenty of Christians who do not fit in this category, who are just as grieved and outraged by the same wrongs, who are not afraid to say so. But there are still enough who bear the name of Christian who choose to keep silent or provide the very platform for Trump to stand upon.

When I read Trump’s tweets, his statements to the press and from the rally pulpit, I also hear the words of the pastor from a church I served for years. I hear him calling anyone who disagreed with him “dangerous” or a “lone ranger,” spinning his sermons into thinly veiled propaganda against the ones he felt threatened by. To leave the church was the ultimate betrayal, a slight against him and his fragile ego. To question his methods invoked the wrath of God for insubordination.

Leaving that church while most of my friends remained meant I had to keep my mouth shut or drastically edit the truth. No one wanted to hear it, because no harm had come to them personally. Because I was talking about their spiritual father, and even with his faults, surely I was making things seem worse than they actually were.

My skin still crawls when I remember those years, when I feel them coming back to me resurrected in a different form—one with far more power for harm. One whose words can incite riots and inspire shootings, start wars and spread fear, nurture hatred in the hearts of others, and do it all in the name of being a “true American.”

The truth is, I am grieved, ashamed, grateful, and, occasionally (I see you, United States women’s soccer team), proud to be American. But regardless, being American is in my blood.

I am not spitting on my mother when I say that I am scared out of my mind by what “being American” has come to mean, or when I weep for her wounds and her numerous crimes, or when I cannot bring myself to pledge allegiance or sing our anthem because of the blood that still runs in the streets and my sisters and brothers who fear for their lives.

I refuse to be silent or to slink away any longer.

And this, I am compelled to believe, is the heart of being a true American.

Enough is Enough. The Best, Most Terrific Analysis of Trump’s Tweets I’ve ever Read. Trump will Never be My President. What do we tell our Children about President Trump?
See relevant Elephant Video