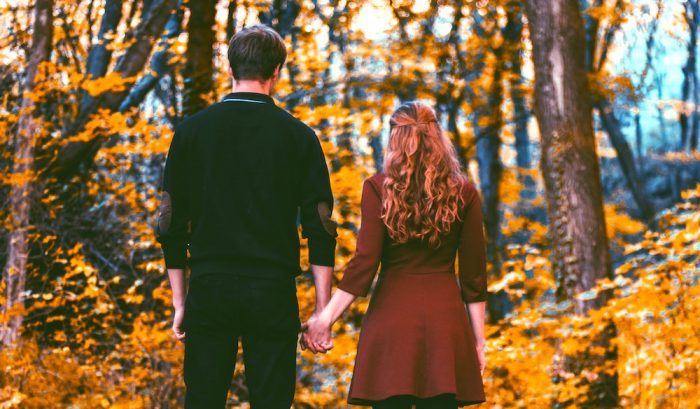 Fall not only ushers in the return of children to school and young minds to university, but it also marks a little known time of year known as “Breakup Season.”

Is this an official season?

However, after seven years as a breakup counselor, I’ve witnessed a surge in my sessions around September, with a peak in January.

Some people laugh when I refer to the holidays as Breakup Season. It’s odd to think that there is a time of year when relationships are more prone to dissolution. However, relationships don’t exist in a vacuum. They are subject to external and internal pressures.

To be clear, a relationship is an energy or entity that is formed when two people merge their lives, hearts, minds, feelings, money, time, and bodies. A relationship is its own thing, with its own personality and characteristics inherited from the people forming it.

Some relationships begin in the fall, during breakup season, and as such have the buffer of romance to protect against annual traditions. That being said, a lot of people find themselves in a three-month cycle where they had a date to do things with from October to January but before the New Year, the sex wasn’t enough to hold the bond together and they get dumped, then finding themselves in a series of three to six months affairs for the next few years. According to Urban Dictionary, this is called “Churning.”

Then there are those relationships that extend about a decade or more past their expiration date. These are the people who stay together for the kids or some sort of unspoken obligation. Sometimes, to survive financially, both people tolerate one another and end up preserving a decaying union. I have members of my family who have wanted to leave each other several times throughout the years of their marriage, but disease and other burdens kept them in their status quo.

Can people break up at any point in the year? Of course. However, the erosion of the relationship seems to be most apparent after Halloween has passed. This is a time when we focus on families coming together and “giving thanks.” But, in reality, the holidays suck. They are stressful and driven by greed and consumption.

The natural cycle of putting on winter fat is exaggerated by the excess ingestion of sweets and massive meals. Loneliness has a sort of death grip in the shorter days and darker nights. We feel our mortality in the cold of winter. Things in nature slow to a near halt. Conversely, society speeds up to a fever pitch in complete contrast to what would normally be a time of rest and reflection. We can literally feel our discontent being masked by the distraction of religious appropriation of Celtic and pagan traditions—otherwise known as Halloween, Thanksgiving, Christmas, and New Year’s.

This is the time of year when we are supposed to celebrate multiple harvests beginning in August and ending on October 31st. However, during Breakup Season, what each person feels in the relationship is unbridled discontent and a sense that justice must be served in the New Year. This is also the time of year when addictions can spiral out of control because excess is a part of our western perspective on how to celebrate the holidays. So, we drink more, smoke more, eat more, seek more entertainment, and lose our connection to what matters most.

It has been shown in the 75-year Harvard longitudinal study that consumption of alcohol is the number one predictor of an unhappy marriage and a major contributor to divorce and separations. The booze flows freely as soon as the holiday parties begin. And while we want to get together with people, we enjoy that enjoyment can often be mute depending on what is happening for us internally during Breakup Season.

So, now assess where you are in your relationship cycle. To elucidate where the cycle begins is in being single. Some people do well in this phase because they have a disposition and survival strategies that allow them to feel comfortable being independent. These folks are known as lone wolves. However, few of us who are not psychopaths stay in this phase our whole lives. In fact, even psychopathic narcissists don’t stay in this phase their whole lives. I know because I’ve dated them.

The drive to belong to something often registers as desire and lust that motivates us to share our bodies with a stranger. Some enter courtship by hooking up. Others prioritize intimacy and take time to be friends first. Regardless, the next part of the relationship cycle is dating. I’ve been guilty of playing “wifey” as soon as someone paid attention to me and have totally skipped over the step of applying discernment to the person who was about to take up space in my life.

I share this to say, there are nuanced moments within each relationship cycle that are subtle. Being discerning is one of those moments. Another is going at a moderate pace where neither person is rushing to define the relationship but rather allowing the relationship to be defined by how it progresses and matures. This takes time.

The dynamics of a relationship begin to show up as demonstrations of affection, caring, and communication when a relationship is healthy. However, if it is sick, the relationship will be filled with drama, love-bombing, codependency, bread-crumbing, and lies. Without professional help, sick relationships don’t get better and often destroy the people involved in them.

The final turn in any relationship cycle is commitment. It is something that will be revisited through all seasons, through aging, and through the metamorphosis of each person within the relationship.

The four horsemen of the apocalypse that show up during Breakup Season are distraction/neglect, avoidance/deceit, betrayal/apathy, and abandonment/grief. They affect every turn of the relationship cycle. They dominate Breakup Season.

So, by the time January rolls around, last year’s taxes have been filed. The man in the relationship has moved into his tiny, bitterness-filled bachelor pad, the wife keeps the home, and assets are being prepared to be divided. Divorce papers will be served in the spring, and a new cycle will begin.

Breakup Season then gives way to the journey of grief and rebirth.

If all of this sounds daunting to you, it is. No one should go into this season blind.

That is why I’m writing this article. I’m bringing awareness to how programmed we all are and how out of touch with nature and ourselves we can become.

As a practicing counselor and medicine witch, I’ve found great solace in the shifting of the seasons. Pagan tradition reminds us to pay attention to the subtleties that go along with life. And while many people would never imagine that creating an altar with candles and pictures of loved ones, taking salt baths, burning incense, praying, and honoring what was, is, and will be could be the antidote to a season that tears couples and families apart, those small rituals can have a major impact.

Some may even bristle at the thought of engaging in witchcraft as a way to heal strengthen their relationship. To this I say, if you research Wiccan tradition, you will see how similar it is to the widely practiced self-help and self-development movement.

I bet you didn’t think an article about Breakup Season was also going to point you in the direction of rituals that celebrate nature and our inner god and goddess. I was raised Christian, so I practice in a way that makes sense to me. The ceremonies within pagan culture mesh with the structure of my religious background.

I share all of this to say, that we have a choice in how to enter into, endure, and thrive through Breakup Season.

Love Bombing: A Seductive & Manipulative Technique. When Prince Charming turns out to be a Toxic Narcissist. How to Rock the Single Status Like a Boss. A 75-Year Harvard Study on Men Concludes this One Thing. The Buddhist View of Loneliness as a Good Thing.
See relevant Elephant Video