Name them & Get Friendly: why Animals are my Friends, not Food. 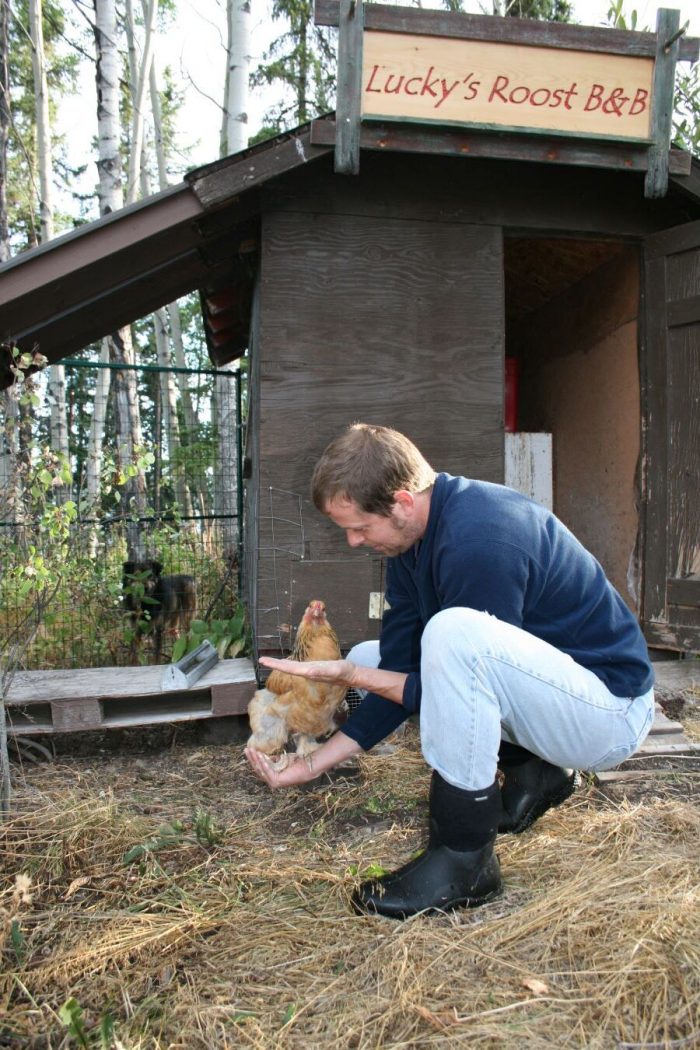 I would love to introduce you to our neighbor Nugs and her housemates Mike, Pat, Flo, and Charmayne.

They all sleep together in the same open-concept tiny house.

The odd names and the unorthodox living situation will make more sense to you when I explain that these neighbors of ours are chickens.

Years ago, I had the epiphany that I would never eat my dog, so couldn’t justify eating a pig. I decided to go vegan. But as with most apparent epiphanies, the accumulated weight of awareness plays a big role in coming to a pivotal decision. It is clear that our flock of chickens was part of this developing awareness.

For the past 10 years, our small acreage has been a senior’s home of sorts for our feathered friends. Our chicken house has a hand-carved sign that says “Lucky’s Roost B&B.” We named it in honor of our first resident. Lucky the rooster was nearly blind from being subjected to dust falling from the battery hen cages above his own cage.

He spent his first days on the property pecking around the inside of our porch while we converted my wife’s childhood playhouse into a chicken house. We did have a barn on our property, but it had been converted to a cabin for our bed and breakfast. When a friend saw Lucky she exclaimed: “I can’t believe your guests sleep in the barn and the chickens get the house!”

Lucky was joined by a series of other chickens who were rescued from factory farm downsizing or other situations where they faced the axe for low egg production. Our biggest group came from a kind soul who saved 100 hens from the discard pile when the farmer sold his egg quota. The rescuer was overrun, so we went to her coop and rounded up the roughest looking hens in the bunch. We named every one of them, including a feisty girl we called “Rubber Chicken” because she was plucked almost completely clean when we got her.

Author and scientist Sy Montgomery, in the excellent Birdology, describes one of her central ideas as “Birds Are Individuals.” This is a powerful concept. In our years with the flock, it is incredibly clear that even similar looking birds (to our eyes anyway) have different personalities.

The aforementioned Rubber Chicken was not the alpha hen but was incredibly fast and friendly, and always quick to rush over for feeding (especially if we were carrying favorites like juicy watermelon). She would cock her head with a rising “What’s up?” cluck.

Our current rooster Mike is a tall, handsome fellow who our human neighbor Elma calls “that high-stepping rooster of yours.” He struts his stuff and takes all the credit for the golden grain we scatter, but is a bit of a nervous Nellie. When we have to round up the chickens for boarding with sweet Elma while we are away, Mike watches with a soft “Ooooh!” call and doesn’t try to come to the hens’ rescue.

Crusty Charmayne hasn’t laid an egg in years but still gets broody and annoyed when we take her down from the nest box to eat. She gives us a beak-lashing for our impertinence while pecking the distracting treats we sprinkle in front of her. In the opening chapter of Birdology, Montgomery devotes 32 loving pages to the flocks of chickens in her backyard and shares information that will seem astonishing to many. Like the fact that chickens can identify over 100 other chickens, mostly by their facial characteristics. They can delay gratification, learning to hold steady and not eat a choice morsel if they know there is a better payoff for waiting. They have a great capacity for spatial learning. They can have friends, and there can be equals in the pecking order—it is not a strict hierarchy (like their namesake humans, our Pat and Flo are buddies). They have distinct calls, which is how we know by ear if a raptor is flying over our property or our dog Dusty is trying to scavenge chicken treats.

Even some of the alleged differences between us and a species like the chicken are suspect. Chickens can be merciless to a wounded colleague and even peck them to death. Have you ever encountered online trolls or Facebook bullies? I rest my case.

Some folks are quick to blurt out the word “anthropomorphism” when we talk about other species displaying what we consider human characteristics. Perhaps it is an affront to their sense of divine order, cultural programming, or compartmentalized and disconnected view of the nature of animals in our lives (pets versus food). As those of us who grew up on or near farms were cautioned: “Don’t name them, and don’t get too friendly.”

We once saw the sort of battery hen operation from which many of our seniors came. It was not even a very large scale operation, but there were still thousands of hens lined up in their cages in the semi-dark, eerily silent. Think of those same birds, in the sun, dusting themselves in the dirt, scratching and pecking among the leaves and roots, calling to their friends and living out their natural lives.

The natural lifespan of a chicken is around six years, far longer than the six to eight weeks a “meat bird” or the year or two a “layer” gets in a factory farm (if you can call that living).

Naming and befriending them, maybe that is going too far for some. But in the interest of respect, we can at least acknowledge that individuals like Mike, Pat, Flo, Charmayne, and Nugs are not meat and egg-producing robots.

We only have to scratch a little deeper to find more decency and kindness in all of our food choices. The Zen of the Hen. On Speciesism: our Discrimination of Nonhuman Animals.
See relevant Elephant Video