On Speciesism: our Discrimination of Nonhuman Animals. 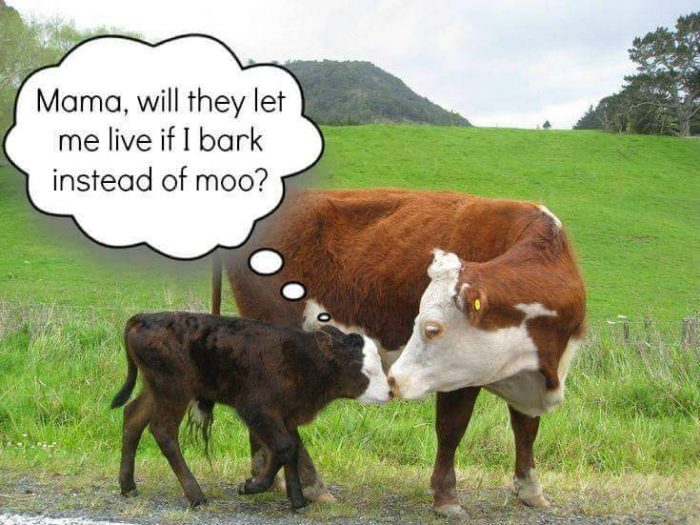 At various stages in our lives, we learn about different forms of oppression, based on superficial factors such as skin color, gender identity, sexual preference, class, ability, and so on.

Yet the majority of us are never taught to consider the oppression of other species.

Speciesism begins at the time we are weaned from our mothers’ breastmilk and transition to another form of breastmilk—that of cows. This typically happens without the adults who give their children this milk even questioning that it’s from mothers of another species, which is designed for their own babies.

Nowhere in nature does an animal drink the milk of another species, and yet we are conditioned to believe that this is normal. Before we are old enough to learn what racism, sexism, homophobia, classism, or ableism means, we learn that animals are ours to exploit.

Societal conditioning has taught us that certain animals are to love and other animals are to eat, wear, and use. Speciesism is the assumption of human superiority leading to the exploitation of animals. It involves the designation of values or special consideration solely on the basis of species classification. Speciesism is what underlies the notion that a dog is a beloved member of the family, while the purpose of a cow is to be eaten or to provide milk for us.

When I was a child I didn’t register the fact that while my family adored and doted on our dogs, we sat down at the table to eat hamburgers (or rather, the bodies of cows) without a thought. There is no difference between the ability of a dog and the ability of a cow to suffer. In some Asian countries, dogs are killed for meat. Growing up, I never would have accepted the idea of eating dog meat, and had I known back then that such a thing existed, I would have been outraged and disgusted. Yet I ate “hamburgers” without thinking of the individuals who had suffered for my taste buds. We have been conditioned to reject the abuse of certain animals, yet ignore the abuse of animals used for food, clothing, and testing.

Later on, when I went vegan, I realized that cognitive dissonance had been responsible for the rift between my actions and my values. Cognitive dissonance is the state of having inconsistent thoughts, beliefs, or attitudes, especially as related to behavioral decisions. Although I had always considered myself to be someone who loved and respected animals, I had been passively accepting their torture and misery by eating and wearing animal products. Veganism allowed me to align my actions with my values.

As is expressed in Shaun Monson’s documentary Earthlings (narrated by Joaquin Phoenix), we are all earthlings; an earthling meaning “one who inhabits the earth.” The tagline on his follow up film, Unity, is “not the same but equal,” which in essence, is a statement against speciesism. In other words, a dog is a cow is a human. The philosopher Hippocrates so aptly stated, “The soul is the same in all living creatures, although the body of each is different.” This prompts the simple, thought-provoking question often vocalized in the animal rights movement: why love one, but eat the other?

If we think about the qualities we share with nonhumans, it is easy to come up with a list, such as: we all have the ability to feel love, joy, pain, and fear; we want to live; we have the natural desire to be free; we are capable of emotions and forming bonds; we are protective of our loved ones; we have central nervous systems. We can then draw the conclusion that humans and nonhumans are similar in the ways that truly matter, and that the ways in which we are different are insignificant—such as the fact that nonhuman animals don’t wear clothing, have jobs, or make money. Therefore, we understand that there really is no justifiable reason for us to exploit nonhumans simply because they were born into different bodies.

Online, it says that the term “speciesism” first appeared in 1970 in a pamphlet written by British psychologist Richard Ryder, who was part of a group of academics in Oxford, England, which was a budding animal rights community. He wrote the pamphlet titled “Speciesism” to advocate against animal experimentation. Ryder argued, ”Since Darwin, scientists have agreed that there is no ‘magical’ essential difference between humans and other animals, biologically-speaking. Why then do we make an almost total distinction morally? If all organisms are on one physical continuum, then we should also be on the same moral continuum.” He continued by saying that mistreating other species in order to gain benefits for our species is “just speciesism and as such it is a selfish emotional argument rather than a reasoned one.”

Australian philosophy professor Peter Singer is known for giving rise to the concept of speciesism in his book Animal Liberation (1975), a text that is widely considered to have set the modern animal rights movement in motion.

A perfect example of speciesism in recent years is the case of Cecil the lion, who was killed by dentist Walter Palmer in 2015. People across the globe were outraged over this and the response was so strong that Palmer essentially went into hiding for a period of time. While the lion’s death was certainly awful, logically we must ask, what is the moral difference between killing Cecil and killing a deer or a pig?

Anti-speciesists seek a world where no animals are exploited or used; a world where individuals—regardless of species classification—are treated equally.

Whether discrimination is based on race, gender, sexual orientation, ability, class, or species, we have a duty to dismantle oppression and fight for justice.