What to call that “Not Quite a Relationship” thing you’re In. 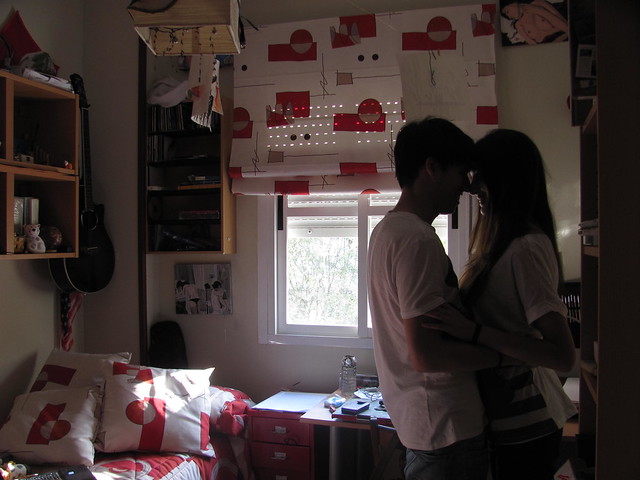 You sleep together and have intimate conversations about life and your long-term goals and dreams. You genuinely care about each other and find you think about each other much more often than you would a friend.

I mean, you just rolled around naked together last night, it’s obvious you’re not just friends.

But you’re also not really “dating.” Not in the traditional sense anyway. Sure, you may go out together. You grab dinner or do drinks on a Friday night. You Netflix and chill like a regular couple. You most likely want to be having sex a lot more than you actually do but you deliberately space out the amount of time you spend together so it doesn’t get murky and start feeling like an actual relationship.

You, my friend, are in what I call, “the in-between.” You’ve land locked yourself into that confusing, non-committal, what-the-f*ck-are-we type of relationship you can’t make any sense of.

When you find yourself in this type of relationship with someone, it’s not always bad. Most of the time, both of you are on the same page with what’s going down. You like spending time together, there’s no drama or expectations between the two of you, and maybe you’re both open about dating other people.

Then there’s the other side of the coin. The one where you want to ask, “what the f*ck are we doing here?” But you don’t want to scare the other person away or appear needy or uncool with the current arrangement, so you just keep on getting on without understanding what you two are.

That could potentially suck for you.

You’re probably feeling one of the following things:

>> You’ve got the feels for the other person and don’t know if they’ve got the feels back.
>> You enjoy the time you spend together and don’t want to rock the boat by asking what your relationship is.
>> You already know the other person doesn’t want more but don’t want to actually hear them say that because then you can’t continue to pretend it might be something more down the road.
>> Fear
>> Fear
>> Did I say fear!?

What the fear is about:

As Marianne Williamson said, we’re always operating in relationships out of fear or love. Love means loving and honoring yourself and your boundaries first. If you were operating out of love in this scenario, you’d have no problem having a conversation about your undefined relationship.

But most of us are living in fear. Fear of rejection. Fear of looking stupid. Fear of embarrassment. Fear of what the other person will think of us. And fear creates no space for honesty or the blossoming of real love.

I’ve been guilty of staying trapped in the in-between—for all the reasons above. I didn’t want to ask for what I wanted. I was afraid the other person wouldn’t want what I wanted and I’d look stupid. On some deep, unconscious level I don’t think I’m deserving of anything more than what I’m being offered.

Feeling this way never works out well. It’s such a betrayal of yourself. Why aren’t you deserving of being seen? Why can’t you want more? Isn’t it okay for you to get the feels for someone who is pretty awesome and who you’re sharing your body and bed with?

There’s nothing wrong with you. You aren’t weak, needy, or pathetic. You’re just feeling your emotions and you’re allowed to have those.

You’re also allowed to be scared of how your in-between partner is going to react. But you aren’t responsible for their reaction. You’re only responsible for speaking your own truth and communicating what your needs are. And what you need is a conversation to clear the air.

What to say to open up a dialogue:

Ask yourself first, “what’s the worst that can happen here?”

I like to do that. Because the worst thing is honestly not so bad. Normally the worst thing is something that’s going to feel uncomfortable for like, 15 minutes and then be over. Like getting a shot. “Eww…that kinda stung a little. But hey, look at that, I didn’t die.”

That’s what conversations like this feel like. Maybe a little apprehension before the needle goes in. A prick. A sting. Normally relief when it’s over and you realize you didn’t die from the experience.

Here’s a script a good friend of mine gave me recently that I think is simple, direct, and not too intimidating:

“Let’s talk about the elephant in the room…I know we might not have a future together but I love the time we spend together and I want us to both feel we can be open and honest about how we feel about this and where we want it to go, if anywhere. I’ll start…”

There’s nothing worse than being in relationship with anyone, whether it be a business partner, friend, or romantic partner, and not knowing where you stand. None of us are mind readers. If you’re unclear what everyone’s expectations are, ask. If you want something more, ask. If you don’t know what you want, cool. Just say that.

Then trust that whatever comes out of the conversation, you’ll be fine. You just won’t be stuck in the in-between anymore.

The Biggest Mistake we make when starting a New Relationship. The 10 Commandments of Dating (if we’re looking for a Relationship & not Just Sex).
See relevant Elephant Video