A Promise to my Black Neighbors for the 364 days following MLK Day. 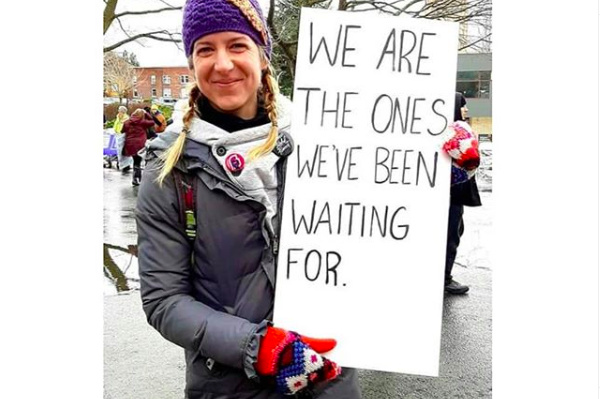 This week, my husband and I attended our community’s 22nd annual Martin Luther King Jr. event.⁣⁣

I turned to him as we sat down and scanned the room, seeing mostly white faces, and whispered, “I can’t believe this is my first MLK event in 39 years of life.”⁣⁣

Several years ago, that may have been said with an apologetic shrug. Now, it makes me cry. How have I gone this long without participating in honoring this man’s legacy beside my black brothers and sisters?⁣⁣

This is no longer okay with me.

I’m a white, cisgender woman. I’ve lived in this community for over three years now, and while it’s a predominantly white community that is working toward more inclusivity, I know very few black people here personally. I don’t know the voices or names of these sisters, these brothers. I don’t know what it’s like for black people to call this place home, what challenges they face on a daily basis, in what ways I can specifically be an ally in my own community.

Showing up at an MLK event is a step in the right direction, but what about the other 364 days of the year? How am I helping to keep the dream alive in the way I live my life at home and out in the world?

I began asking these questions this past year. I’m only just beginning.

Race is one of those highly privileged things I’ve been able to put on the shelf all my life. As one definition of privilege goes, racism didn’t affect me directly, so I chose not to prioritize it. When the Black Lives Matter movement began and as it’s grown, for the most part, I’ve stood back and clapped my hands and nodded, “Yes, this is so important,” and occasionally tossed out quotes from Dr. King himself, while doing little to actively engage with the movement myself.

Along with most of America, including our POTUS (let this sink in), I’ve even self-described in the past as “not racist.” If I wasn’t the one tossing out slurs or pointing guns or burning crosses; if I smiled at black people and believed in equal rights and harbored no ill will and had some friends of color, I was okay, right? I loved everyone; how could I be racist?

I had no idea that the opposite of racist isn’t not racist, but anti-racist. Not racist is a statement of neutrality, a passive stance, in a similar way that saying, “I don’t hate myself” is a far cry from “I love myself.” There’s a whole spectrum of ideas, beliefs, actions, and inactions that fall between racist and anti-racist. And most of us fall somewhere in between.

In order to love ourselves, for example, we must put in the deep, emotional and practical work of confronting falsehoods, limiting beliefs, past abuses, low self-esteem, and cultural conditioning. We must diligently practice mindful awareness, forgiveness, compassion, and self-care. We must do this, day in and day out, failing in one moment and succeeding the next. It is a lifelong work.

The same could be said of becoming anti-racist. It’s an active pursuit; a long-term commitment. We must be willing to confront racism in every crack and corner of our personal lives: our speech, our beliefs, our friendships, our voting records, our school curriculums, our spiritual communities, our places of business, our neighborhoods, the books we read, the music we listen to, the shows we watch, the corporations we support, the people we follow on social media. And we must be willing to commit, in this honest confrontation, to dismantling racism in any way we can. Day in and day out. Failing forward, but never giving up.

Once this truth began to sink in, I realized how much work I have yet to do.

The backdoor to self-revelation came, for me, through environmental activism.

As I’ve aligned myself with activist groups working in partnership with or in support of indigenous leaders, I’ve seen clearly the role of race in the work of climate justice. I’ve listened to indigenous voices and other marginalized voices and heard the call for allies. I’ve learned about white saviors and how the world doesn’t need any more of these. In learning, gradually, how to be an indigenous ally, I realized I’ve invested very little effort in learning to be an ally to the black community.

I’ve done a lot of apologizing. Mostly, I’m trying to shut up and listen. And what I’m hearing is, We need white people to show up for us as allies. To be consistent in walking the talk. To stop defending good intentions, demanding softer language, and expecting to be made more comfortable within the conversations about race. To be humble, to be teachable, to be fiercely committed to justice.

It’s not okay for me to show up for the Women’s March but not MLK Jr. Day. None of our activist movements—women’s rights, climate justice, economic justice, immigrant rights, LGBTQ rights—are going to be effective if we don’t recognize how they intersect, especially with race. Racial injustice is at the core of so many of these cries for justice, yet we white people have largely ignored this. That’s beginning to change. It absolutely must change.⁣⁣

Starting with me. ⁣⁣

As one of the speakers at our MLK event said, we must be willing to move from “safe spaces to brave spaces.” It’s no longer about just hanging with our “tribes.” This is not where growth, change, and reform happen. Playing it safe does not sustain a revolution.

We can only win together if we also struggle together. ⁣⁣

I promise my community, my black neighbors: I will do better.⁣⁣ I will show up, I will introduce myself, I will ask questions, I will listen. And I won’t let another year go by where I’m not looking for opportunities to stand together and lift you up.

King’s Legacy in Trump’s America. How to Approach the Guilt, Shame & Privilege of being a White Woman. A New Year’s Resolution for White Women: Confront your Racism.
See relevant Elephant Video