I feel nervous, excited, and cracked wide open—raw and exposed—thinking about sharing my (our) story and message. But it needs to be shared so others feel less alone.

Learning to let go of control of outcomes is a big lesson for me—a miscarriage and molar pregnancy will teach you that.

My entire life, I have been able to manifest anything I envisioned for myself. This was the first time a manifestation came into my reality and went so wrong.

I went to my first ultrasound so excited to hear a heartbeat and all the things that come with a first pregnancy. I didn’t know what to expect, but I didn’t think it was going to unfold in a bizarre direction.

After a long pause, the doctor said, “In all of my 25 years, I have never seen anything like this.” There is nothing more vulnerable with a probe in your V, legs spread wide open, hearing that!

I knew something was weird after that cold statement. He showed me the screen, and there it was—an actual infinity sign in my uterus. The one side had a baby in it and the other side we still aren’t sure about. My gut told me it was twins. He told me to expect to miscarry that night.

The next day, I had a flight to South Carolina for a business retreat with my coach and a group of other women. I took five days off for this trip, and all I wanted to do was lie in bed for five straight days and cry.

Instead, my husband encouraged me to go, which turned out to be the most divine timing.
After the first day of being on the retreat, I got the call that my HCG has dropped instead of doubling like it was supposed to. I knew right away what that meant. I’ve never cried so hard in my life—I was seemingly “alone” in a totally different state with no family and no husband to cry to in that moment.

But there was a group of women inside the house where I was staying. I went back in and shared my news, my feelings, and this devastatingly big feeling of pure powerlessness.

I have never felt so not in control of my body, my life, and my power.

I can’t tell you all the thoughts that raced through my mind. The biggest one? Blame. I wanted to blame someone. Immediately it was me. I kept sharing all the thoughts that came my way. I’ve never felt so seen, heard, held, exposed, and raw as I did on that women’s retreat. That chic Airbnb bungalow became my safe space of grieving, sharing, healing, and receiving over the next five days.

When going through a loss, I would have never chosen it to be in South Carolina with a group of women I had never met in person before. But it was the best thing that could have happened. I allowed myself to truly feel. I felt the power of sisterhood and the true experience of healing through sharing.

I got my power back that weekend. I began to trust that whatever the outcome was the best one for me and my spiritual journey.

I went to my second ultrasound with some hope, but it turned out to be nothing. Just two big blobs on the screen. The tech was convinced it was conjoined twins. I had to have the emergency procedure done the next day since my body never released. I was on my way to healing.

Four weeks later, I got the call. Labs came back with 69 chromosomes. Molar pregnancy. Noncancerous tumor. Can’t medically get pregnant for six months to one year.

Since then, I’ve been getting my blood drawn every single week to make sure the HCG is going down. It was at 300k, which is insanely high.

My faith in trust has been thrown for a loop. I had my first hate of my new, bigger body. My first panic attack. They called me every Monday with the results, and I feared they were going to tell me levels went up, which is super rare but means that abnormal cells are still present, growing, and can turn cancerous.

No matter what age you are, the word cancer is scary as f*ck.

Faith, trust, belief are all temporarily thrown out in the trash and the true test and struggle is to invite them back in.

My body is still slowly healing. I just got my HCG down to zero, which means I need to be monitored for the next six months to make sure I’m fully in the clear.

To trust that my body knows what to do.

I’ve learned to share my feelings in a deeper way than ever before.

I’ve learned the importance and need of sisterhood.

I’ve learned to accept, surrender, and to believe that this is all happening for me and not to me.

I’ve learned to give myself permission to see this trauma as serving me for my highest good.

No matter what season you’re in, it’s okay to feel however the f*ck you feel. You’re not alone. You are supported. Your body is a miracle and you are magic.

When I take a moment to think about how my body created an infinity baby—it’s actually really f*cking cool and magical.

This baby wasn’t born into the physical world, but that weekend in South Carolina, “The Community” was manifested and birthed into the world.

Sometimes from pain and struggle, powerful resources are created to support others and make a bigger impact so women don’t feel so alone in this thing called life. 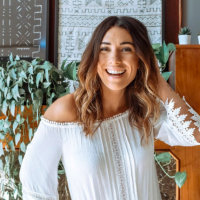