Love at First Sight or “Have a Nice Life:” The Binary Hell of Online Dating. 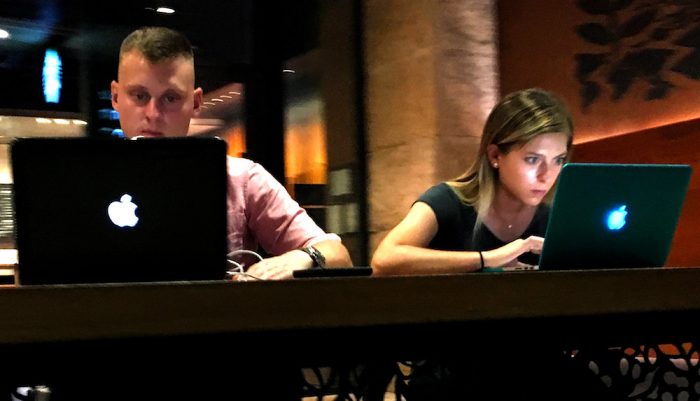 There was an interview I once saw with Jerry Seinfeld where he was discussing the unlikely origins of his uber-successful sitcom, explaining that he was the type of comedian who “people just didn’t get excited by.”

I knew exactly what he meant. He wasn’t flashy like Chris Rock; he wasn’t shocking like George Carlin. He was Jerry Seinfeld—observational with no vulgarity.

So why, exactly, at $950 million, is he the wealthiest comedian on the planet?

I’m assuming because there is a lot more to life than shiny and flashy.

This interview has stuck with me for a number of years because I really identify with what he was trying to explain. With regard to who I have always been as a man and as a romantic partner, my experience has been pretty similar. I have never been the kind of guy who walks into a room and has women swooning. No knees have ever buckled the first time anyone has set eyes on me.

I don’t really feel slighted by life because of this. There is this Darwinistic tendency for a man like me to develop other attributes to compete in the animal kingdom, and, as a result, I have three beautiful daughters.

Recently, I was out on a date with a woman whom I was interested in. The conversation flowed rather freely throughout the entire meal, and it seemed as if we had quite a bit in common—similar politics, ideology, and artistic tendencies. It was only at the end of the date, when she offered to split the check with me, that I determined that we would not be going out again. She explained later that evening via text that she didn’t get any “romantic feelings.”

As I mentioned, I have never been a “love at first sight” kind of guy.

What frustrated me the most about this is that I just know that if the situation were different, if we worked together, for instance, I could have found my way into her heart. I have done this so many times in the past—and by past, I mean before the advent of internet dating.

We are living in a strange time. Dating sites such as OkCupid, Tinder, and Match have changed the entire landscape of romance. The reality today is that you see someone’s photograph, you message back and forth for a week, you meet up for coffee or dinner, and it’s either thumbs up or thumbs down. Love at first sight or “have a nice life.” It’s all very binary.

The way these sites are set up have a lot to do with this. They have a tendency to give people the illusion that the options are virtually endless. There is this never-ending parade of photographs representing potential mates, and if the person you are sitting across from doesn’t check all your fantasy boxes from the first instant you meet, well, not to worry! No more having to waste all of that precious time with the inconvenient and slow-moving procession of getting to really know someone. Get back home and check that inbox! Your perfect partner is most likely right between your Aunt Mathilda’s guacamole recipe and your Visa statement.

Some have theorized that our addiction to consumerism and sites like Amazon has actually shaped the way we approach dating. Terms such as Sexual Market Value (SMV) have come to the forefront as a way of determining how well one will do out there. People are going on dating sites and shopping for a mate the way they’d look for an OLED television. It isn’t such a vast jump to go from “this one is brighter but the other one has better speakers “ to “this one has blue eyes but the other one owns a restaurant.”

Of course, this is not necessarily a new perception. Expressions such as “she’s back on the market” have been around since the market was where one bought a revitalizing tonic from someone in a wagon—it’s simply that internet dating has exacerbated some of our worst tendencies.

As a writer, I have been fortunate enough to cultivate many friendships with men and women of all ages from all different parts of the world. This has provided me with the advantage of knowing that what I am experiencing is not an isolated phenomena. Speaking to one young lady recently, she admitted to me that she has been finding herself relieved to go home alone most nights, just politely waiting for the date to be over. “I am afraid that I might actually be dead inside,” she admitted.

The more I thought about our conversation, the more I realized that it’s really all of these apps that are making us feel that way. I know, for myself, I was becoming a lot more cynical. There was a time when I would get one of those emails that said “Joanie likes you,” and I’d be clicking away to see who Joanie was. Those messages now go largely ignored.

Something, however, changed last night that filled me with a sense of hope that I haven’t felt in a while. I clicked on Facebook dating and saw a profile from a woman who explained that her lover had recently passed and, although it was too soon for her to start dating, she’d love to find a friend.

I wrote her back, “I’d love to be your friend.”

And that felt like the most sincere message I have written on a dating site in a long time.

Love is not a Checklist.  My Foray into Online Dating: Getting Back “Out There” when you’re in your Late 40s.
See relevant Elephant Video