America is Burning & we are F*cking tired of It. 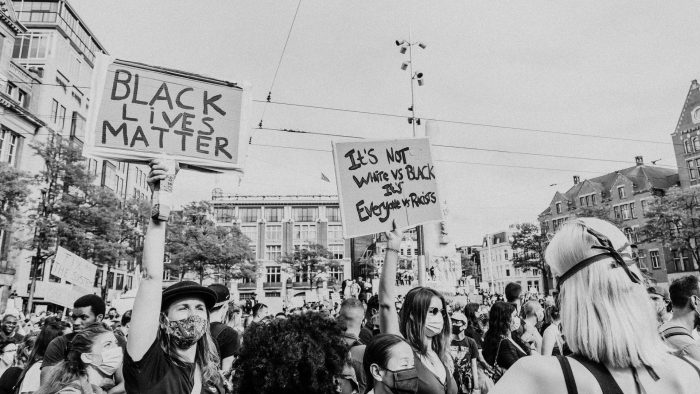 For those who are disturbed and questioning the riots unfolding across cities in the United States, here is why America is burning.

The fire did not start on May 25, 2020, when a Minneapolis officer knelt on George Floyd’s neck resulting in his unjust death.

>> The fire began in 1640 when John Punch was sentenced for lifelong servitude because he was black.

>> In 1865, the Ku Klax Klan massacred thousands of black people.

>> Laws were passed in 1877 that separated whites from blacks on public transportation, and in schools, parks, restrooms, elevators, and other public spaces (even water fountains).

>> In 1965, nonviolent protesters were attacked in Selma.

>> In 1991, we saw the first video of police brutality in Los Angeles, when officers beat Rodney King.

>> From 1991 to 2020, some of the names ingrained into human consciousness for the injustices done to them are: Amadou Diallo, Trayvon Martin, Eric Garner, Tamir Rice, Sandra Bland, Ahmaud Arbery, Breonna Taylor, George Floyd. And, of course, there are others. Names and faces of countless others.

The fires have been long-simmering in the hearts and minds of our African American brothers and sisters. Each unjust happening has acted as a spoon of oil in that fire; the flames are rising now, and spreading to the streets and corners of the cities.

An eye for an eye will leave the whole world blind, but this is also not the time we turn the other cheek.

When I wrote “Hey America I can’t breathe,” I was asked if police brutality was different than racism. I thought about it, and my reply for African Americans is: no.

In a basic analogy: when you’re driving on the road, another car may be in your blind spot (the place you can’t see while looking in your mirrors)—does it mean that car in the blind spot does not exist? No.

Similarly, racism is the blind spot, and police brutality is the onslaught of traffic in the front and rear views.

I wanted to reason with data further, and this is what I found:

These numbers are self-explanatory, for racism-based police brutality acts as another spoon of oil that is fanning the flame of turbulent emotions, one that has been smoldering from years of oppression.

If we are going to denounce riots, then we have to blame the conditions that cause riots.

As much as riots are socially destructive, we have to ask this question: how do we channel rage to lead a movement of change and transformation?

To do that, we have to dive deep into, and tackle, the disparities that have existed for black men and women—socioeconomic, health, education, opportunities for growth, and pay.

The unemployment rate of black Americans could be addressed, for a start, by narrowing down the education gap. Better quality of education implies more opportunities for growth and progress later on, and thereby less territorial fights, riots, and looting on the streets.

The coronavirus has already highlighted the healthcare gap, where it has disproportionately taken black lives.

Police brutality has to be addressed head-on with more laws, policies that make it mandatory for the officers to use alternatives methods of force and deescalating a worsening situation, and not only use of, but activation of body cams nationwide.

Racism has further broadened the socioeconomic disparities leading to where we stand today with riots and protests. If we do not realize the terms and take measures now, America will continue to burn and bleed.

There is no playbook for protest.

Coming from the nation of Gandhi, I do not condone violence and I believe in nonviolence. But, I am not sure if I can really comment on the methods of protests, because I am not directly in the shoes of my African American friends.

I pray for protest, but no looting and destruction when we know the havoc the lockdown is already having on our businesses. (Let’s bear in mind, there will be opportunistic and irrational elements in the best of scenarios from all races.)

During the last few months of a pandemic, the richer have grown richer; not the small businesses that are run by people like you and me. So I do wonder where the real looting is happening, and who should be looted when it comes to the wealth gap that exists today.

In civil unrest, or the fight for freedom, there is no argument for violent or nonviolent protest. Each country in the history of the world has defined its movement—India, South Africa, Yemen, and Egypt, to name a few. When unrest has been severe, the protests have turned violent as we are witnessing now in the United States.

My sincere hope though, is that the leaders of the Black community and this nation transition to a strategy that can shape the country’s policies toward a just society. I hope that leadership is thinking of an approach to take steps to transform the face of the nation in a way that there will not be another George Floyd dying in broad daylight. The measures that will be taken now to provide not only justice, but to ensure more laws and policies toward equitable society will have an impact on the generations to come.

And, we—all of us—have to start soon. We have to douse the flames that are burning America, because it may not be long until they burn down our home.

We are scarred, hurting, and cannot take it anymore.

Black lives are dying and we are f*cking tired of it.

Brené Brown defines “White Privilege” for us—& it’s the Best Explanation I’ve Heard. Why I won’t post a Little Black Picture—it’s doing the Opposite of What We Want. “Before you Call the Cops:” The Video Everyone should Watch Right Now.
See relevant Elephant Video