I made an AI Write Me Sex Poems—they were Dark, Dirty & Surprisingly Tender. 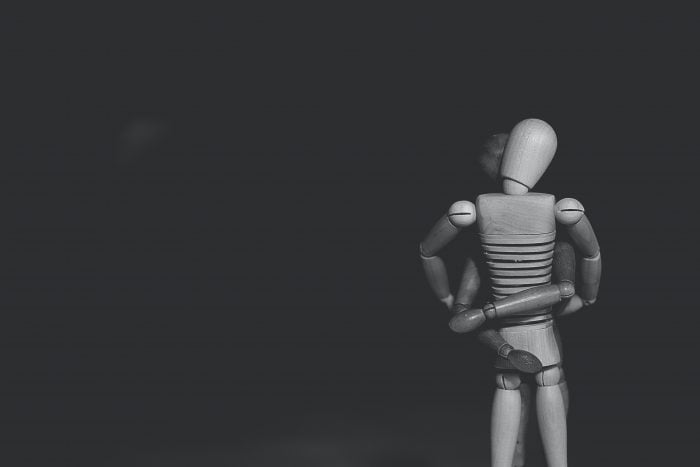 One of my tech-savvy friends recently directed me to a website called TalkToTransoformer.

It is a project by Adam Daniel King, using Elon Musk’s open-source AI text generator, which creates a coherent text one word at a time based on the user’s prompt.

So, I did what any reasonable human would do: I stayed up until four in the morning trying to get it to write me sex poems.

It wasn’t my original intent, but once an AI writes you one sex poem, you’re not just going to stop there. I started with simple statements like “Sex is a Game,” and it spat out an answer that wasn’t all that crazy from what I’d expect from AI:

I typed: Sex is Passion, and that’s when things started to get a bit weird.

Sex is passion
by TalktoTransformer

like water and fire
already
to be
free, free, free
call the law
puppets
out of their cages
free
may I?
you’re not hearing any drums
make some noise, man
just like that
free

Now, this was not even close to its best work of the night, but it showed me that this AI was capable of poetry. Once I knew that, I was done for. I tried Sex is Passion once more and got an entirely different and much more NSFW result:

Of course, I knew what I was getting into the moment she took me in her mouth, and I may not be the average boy, but she was certainly pretty hot. And she was more than willing to share that hotness for my pleasure. For me to kiss her pretty little body, and to take that high of a pitch I wanted to hear the crowd’s reactions, was beyond a one-time-only reward for getting laid tonight.

A few minutes later, I was satisfied; I stood there with my arms out to catch Jess’s head of hair as she finished.

Not to be left out.

Yes, in case you were wondering, that was some AI erotica.

But, it wasn’t what I was looking for. I wanted more poetry. So, obviously, I went with: Sex is God:

Sex is God
by TalktoTransformer

No, I did not edit that at all. Yes, it gave it to me in stanzas.

Now, I studied creative writing in college. I’ve been to open mic nights. This poem right here beats 75 percent of the poetry I’ve heard. I was stunned.

I took a moment to grab a sticky note and write down as many things as I could think of that I could plug into “Sex is ______.” There were a few misses that, while not poetry, turned out to be absolute fucking gems, like:

Sex is vulnerability
by TalktoTransformer

Just like in a verbal argument between lovers, in sex the partner is “putting on the other person” to show their power and vulnerability, something that can be quite intimidating. Although sexual arousal will always be different from natural biological arousal, in the same way, in a new sexual encounter, there will always be vulnerability and arousal. In addition, the interpersonal dimension means the acceptance, recognition, and desire to be supported in vulnerability.

I mean, “sex is putting on the other person to show their power and vulnerability, something that can be quite intimidating.” Where the fuck was this insightful robot when my gym teacher was telling us about boners?

At this point, I admit, I called my brother and told him what I found. And, of course, he started to help me come up with different “Sex is _______” words, and then I’d type them in and read him the poems.

We soon found a combination that nearly always gave us a poem:

Sex is love
by TalktoTransformer

And, after we managed to stop laughing—I mean, who says booty these days? You can’t write this stuff! No, really, you can’t. A fucking robot beat you to it.

Sex is love 2
by TalktoTransformer

“Break up is like cancer. It’s like an alien invasion.” Really? If I didn’t know better, I would have thought we’d picked up an Alexa eavesdropping on some broken-hearted teenager.

“Have you tried sex is beautiful?” my brother asked.

Sex is beautiful
by TalktoTransformer

Yes, the short narrative of sweet flesh that was released to the world three days ago by Kanye West makes us question the reason for nature’s imperative for either men or women to make the first move to be selected in a rom-com. But by the time we’re finished questioning if a character can choose her own loving partner, or whether we want to watch the Hulk tear through a fictional city for leather chaps, we’re sure to start questioning the questions that should have been addressed from the beginning: Is kissing really all that bad? (Answer: no, but we’ve already proven it isn’t.) Sex is certainly unique, but it’s not a horror movie. It’s a film.

If that’s not poetry, I don’t know what is. Yet, being sticklers for form, we tried to go a bit more lyrical:

Sex is Beauty
by TalktoTransformer

It’s true, I never expected to be reading something like that to my little brother in the middle of the night. But there we were. This foul-mouthed AI love guru had led us into the wee hours of the morning with its outrageously unpredictable insights. It made up people, quoted them, and referenced books that don’t exist.

Made up people:
But after World War II, says Professor Ziv Oren, a specialist in the Israeli author “Ancient Israel,” new attitudes gained ground. “Sex was the main form of commitment,” she said. (Sex is Peace)

Fake quotes from fake authors:
As one of the authors of The Gropenomic Suite says, “When we are with another person it is very easy for our bodies to provoke empathy in each other … By being vulnerable, hurt, and showing ourselves in a way that is new, [art is] especially powerful.” (Sex is Healing)

Excellent advice:
Do NOT, under any circumstances, initiate a “Where are your pants?” or “What’s the matter, buddy?” conversation — (Sex is Desire)

Fear of God:
Those that are a member of the devil put their own selfish needs ahead of the needs of others so they will fail. Those who are concerned with this earthly life are judged by the heavenly standards and God will show you. (Sex is God)

Open-mindedness:
As our collective humanity has descended into an Orwellian dystopia, it’s high time we stopped pretending that, say, male anatomy is more important than female, and stop pretending that a boy being fitted with a boob prosthesis is no more a catastrophe than a girl not getting the prosthesis. (Sex is Human)

And, when my brother finally said, “Good lord, we’ve been at this for three hours,” with 50 pages worth of poetry copied and pasted from TalkToTransformer, it left us with this last little gem:

Sex is Dirty
by TalktoTransformer

I will take your virginity
I will lay you down
I will take your clothes off
I will love you to the ends of the earth
And it’s not a matter of me just loving you, it’s my turn.
Let it come to me
Come on baby

And, before my brother got off the phone and I went to bed, he summed up my thoughts exactly:

Poets of the future are fucked.

Note: I later learned that if you hit “Enter” after your prompt, you are more likely to get a poem (I think).