When i was training in yoga and mindfulness, I used to joke, that going into retreat was no test, what they should do, is hole you up in a cave with only a couple of small children for company, and if you came out of that with calm and peace in your heart still, then you deserved your guru status.  Little did I know the universe would take me at my word and give me just that test!!

Right now as I write this, we are in it!!  We have been shielding at home because my little girl has a sever respiratory condition, and my little boy might have a brain tumour that causes seizures, triggered by many things but illness being the worst.  So for over two months now, the three of us, me a single mother, and my twin five year olds, have been inside a barely two bedroom house, with a small concrete yard, crowed on both sides by the other terraced houses.  Not quite what I had in mind when I said I would like to do one of those solitary retreats one day!

Life in all its wisdom, felt i really like a challenge, so, first it would make sure i was exhausted .  It would also make sure I had plenty of challenges to my peace along the way.  To give you an idea, since the summer before when my little girl got repeat pneumonia, leading to a lung collapse and lots and lots of hospital stays, id been juggling being a single parent, trying to keep my job, my child alive, fighting for the right medical care, for her twin to be with us in hospital, finances, home…… all the usual stuff single parents have to face.  Alone.  Its a whole other story, but their dad is not on the scene in any way and never has been.  So since the surprise of being pregnant, the difficult choice to leave someone who was not right for me, finding out I had made the right choice when leaving prompted incidents that needed police involvement.  A complicated birth, living alone with two children on a canal boat for the first few years, moving five times and then eventually finding some sense of settle, only to have my little girls lungs collapse, and then just as we started to breath (pun intended) as we had the right medical care, and things were settling, her brother started to have seizures, a very rare kind, that point towards a benign brain tumour on the hypothalamus.   Anyway you get the picture, I was emotionally and physically exhausted, when I got home from work one Thursday night  on the 11th March 2020, to be told by my childrens nursery that my little boy was ill,  high temp and not himself at all.  I took him home and things got worse,  leading to a big 12 min seizure and an ambulance.  We got home the next day at 11pm with the advice to stay there and not leave for any reason.  We woke up the next day to the news Covid was here and hospitals were shutting to outpatient appointments and just over a week later the whole country went into lockdown.   A bit like a computer game, we got a handle on this lockdown it up the difficulty to the next level!  A day after those shielding were allowed out for a walk, I dislocated my knee, and the universe up the anti, so that now I was parenting children who had been in a small confined space for what felt like forever, whilst the world started to carry on as normal, and I was in a splint in crutches!

Id love to tell you, that after years of practicing meditation and yoga and training in counselling, psychology, play therapy and decades of working with families and children, that it was all an oasis of calm.  I cant (well not without lying!) we have struggled at times, I have almost locked myself in the bathroom (non of our doors have locks and they can even open the front door one anyway!), furniture has been broken, we are all bruised, at one point, they were literally trying to climb out windows and I had to be a jailer and monitor the front door!!  There has been lots of tears, mine and theirs!, I can tell you its given me examples and moments of how I don’t want to parent, and helped me practice over and over again, consciously choosing how I want to parent!  We are not used to staying home, home was just a base from which we explored and now it was our cave or retreat and I was locked in with two manic, distressed, small people whilst exhausted beyond anything id known and worried about what would happen if we did catch it!!

But, I can say, that mostly Ive managed that with calm (note the mostly! Not the always), and I put that down, to years of training and learning, and mostly lots and lots of practice!!  That mostly we have enjoyed each day and each other, we have played and laughed and cuddled and in some ways will be sad this retreat will come to an end.  It took a bit of adapting and working out, but once we had, we found we could adjust and find joy in the tiny things.

How?  Well, not sweating the small stuff and choosing my battles! Allowing the house to be a tip and creativity to run free, taking it day be day and sometimes hour by hour and for me to practice my yoga and mindfulness in every moment I could.  Breathing through a lot of big emotions and holding each other through them too.  Mostly being open to love and not trying to change anything, but allowing things to be as they where.  Simple!  And yet sometimes so hard!

Mindfulness and yoga changed my life, and the way I would parent.  Im so so glad I found those things before I had my children. But, the good news is, that even if we don’t find that place of calm, we can always learn it!  Its never to late!!  Our brains are able to change and adapt up until we die, its a process called neuroplastiticy and its pretty amazing ability we have!  And we all have a brain – even after five years with twins!!  But  Ill save the lecture on that till next time!

Im hoping to document our days through this blog – no idea yet what it will be, part diary (if diaries were wrote after the fact in no particular order – is that more a memoir?!) part useful tips – if anyone needs useful tips on how to dislocate their knee or how to avoid being murdered by your house appliances and prob most therapy for someone who at the point of writing this , has been in that cave with two five year olds for just over three months!!  Whether I come out a guru will remain to be seen, Ill be happy if we all come out alive!! 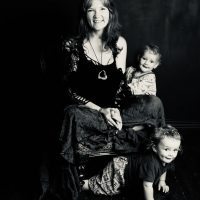 Lindsay Reynolds is a single parent who started this journey living on a canal boat, and when that became too small, moved into a caravan, before renting a little cottage. Her… Read full bio