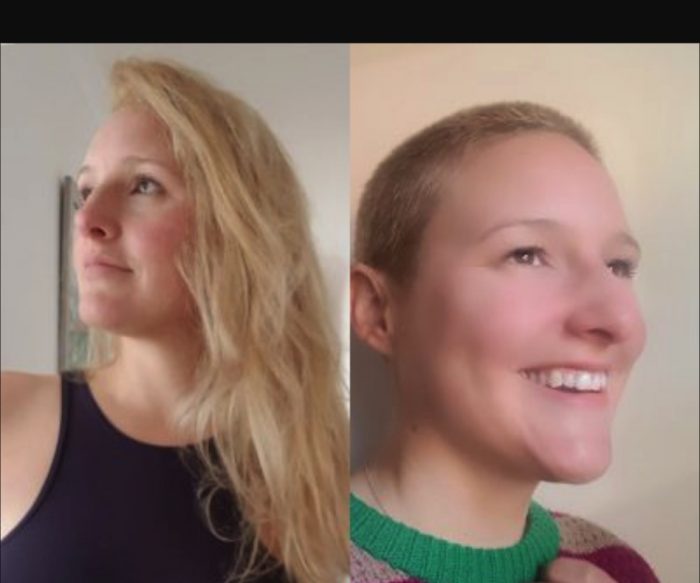 It wasn’t exactly a decision of the mind when I shaved off all my hair.

I just wanted to get it over with; I was afraid I would wuss out.

So when the sound of steel slicing the strands of my long, blonde hair vibrated into my reality, I knew it had begun.

While visiting my sister, I had told her of my intention. In contrast to my nerves, she seemed excited—she wanted to make the moment sacred for me.

We came together, built a fire under the almost full moon’s light, announced something we wanted to let go of, and then threw a sprig of sage into the flames. Mine was to release my attachment to the decade-long story that said my hair made me beautiful, sexy, and desirable.

Her two daughters then fulfilled most children’s dreams and got to chop off the length of it with kitchen scissors. They giggled and picked up the cuttings and held it to their face like a beard and pretended to be Santa⁣⁣.

The idea had been growing in me for a while—watered by women who had done it before me. There was something in the energy of it all that called to me.

Since studying sexuality, I have met parts of myself that I had never embodied before. I tapped into pleasure that I didn’t know was possible and loved myself from the inside out. I was an opposing thought to loving the outside first like I had been taught from my well-intentioned mother (just like her mother had taught her).

As each strand fell to the ground, I knew I had done something that couldn’t be undone. But instead of tears, I had a few tingles ripple through my body and a deep sense of presence.

At this stage, I looked like I was going to an audition for Oliver Twist—I laughed and was ready to go shorter. A beautiful brother of mine then got the shearers and began to carve away what was left. We spoke of our day and our dreams, with no pause in between.⁣⁣

I know it sounds random and a little trivial to talk about hair like this, but it’s incredible to learn the depth of the relationship both women and men have toward it⁣⁣.

Men are afraid of balding; women are afraid of going grey; Barbie has unachievable thickness and length; and boys are called girls if their hair is longer than a traditional buzz cut.

Also, as someone who has battled with being “overweight,” my hair was something I thought I had more control over. I could use it to make me look and feel “more beautiful.”

I no longer had that crutch to lean on.

As I ran my hands over my scalp, ready for bed, I knew I had to be gentle with myself and thanked everyone for their support⁣⁣.

The next day, I looked in the mirror and saw a Tegan I had never met before.⁣⁣

I felt free, light, and surprisingly empowered; however, I perceived what I looked like through a flood of judgments and fear.

I look like I’m trying to be Sinead O’Connor, like a dyke, or that moment when Britney cracked.

Will any men find me attractive?

Will they think I have cancer?

I greeted each of them with a smile because, just like letting go of my hair, I have (through much practice) showed myself that I am safe in the process of letting go.⁣⁣

To date, I had always worked toward the slim, big boobs and blonde hair ideal we get fed, but it had never felt the way I thought it would. (The way it was sold to me.)

As I got out of the shower (which now only takes a couple of minutes because I no longer have to spend all that time washing my hair), I looked at myself and stopped. My mind began telling me that I now looked less attractive. But at that same moment, I also asked, “What makes me less attractive now?”

My hair couldn’t be the make-or-break standard of attractiveness, could it?⁣⁣

Maybe the irony is that I felt more alive honoring the woman I had become by releasing those rules and guidelines around how I should look. I started to play my own game.

It’s taking some getting used to, but there is something different in my energy.

There is this part of me that feels unstoppable.

There is a weird sense of empowerment and peace around someone not being able to blackmail you because you’re not pretending anymore.

It feels like this is yet another layer of transparency, much like the videos, words, and images I have shared about the things I once felt shame about. It has resulted in old tension and thought patterns leaving my mind and body.

I do feel like I have a new wave of compassion for women, though. The ones who wear makeup all the time, choose to get plastic surgery, and won’t fart in front of their partner. I imagine all of them believed (to some degree) that they would be more attractive if they just changed one more part of themselves.

I want to be a part of the world that doesn’t just tell them that they’re beautiful the way they are, but shows them.

To be honest, this decision doesn’t always look like Oprah on a good day; there were many tears in the days that followed.⁣⁣

But, I still don’t regret doing it.

I am just amazed by the layer of vulnerability I have uncovered. The next layer of Tegan—here to be embarrassed and loved ⁣unconditionally.

While I adapt to dancing with the wind in my nonexistent hair, take note of the glimmering eyes of a woman who is prepared to shave her head. 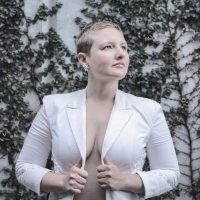 Tegan Cork is a well-sought after Self-Love & Sexuality Coach. Having embodied the journey from depression to joy, she now inspires, guides and supports men and women who … Read full bio

F*ck all the Judgment & Labeling—We are so Much More. “Be a Lady, They Said:” 785 Words that Every Damn Woman Should Read. I’m a Lady, a Slut, a Virgin, a Mother. I’m Whatever the F*ck I Want to Be.
See relevant Elephant Video