Don’t make the same Mistake your “Woke” Elders Once Made. 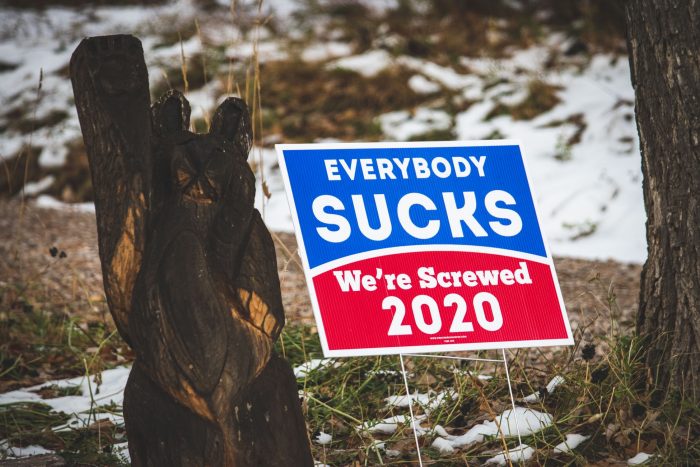 The first election I was eligible to vote in was 1968.

I was as woke as a young white man could be, back when the terms closest to “woke” were “hip” and “cool” and pretty much anything else that wasn’t “straight,” which referred not to a sexual orientation but to people living an ordinary, conventional way of life.

To me, the major-party presidential candidates, Democrat Hubert Humphrey and Republican Richard Nixon, were cut from the same cloth. I couldn’t bring myself to support either of them. I was too progressive for that. Too radical. I’d studied Marx and the history of racism and oppressive social structures with lefty professors. I was a member of Students for a Democratic Society. I’d marched and protested for social justice and an end to the Vietnam War. I’d gone to rural Georgia to register Black voters after the Voting Rights act was passed.

Yeah, Humphrey was a liberal, but not progressive enough for me. Not even close. I was smugly certain he was as much an establishment tool, as much a slave of the capitalist system, as the reprehensible Nixon.

On top of all my political wokeness, I was also in the early phase of my spiritual path. I’d studied Zen. I’d embraced Vedanta and yoga. I’d taken up meditation. I set my sights on enlightenment. I was practicing nonattachment. I wanted to be above the fray; in the world but not of it. It was all an illusion anyway—all maya, one of those newly discovered concepts that allowed spiritual neophytes like me to think we were on a higher plane than the straight world, and even the ordinary hippies and activists we sometimes hung with.

So, along with an untold number of others, I refused to vote for a mainstream candidate. Some renegades wrote in the names of politicians who’d run unsuccessfully for the Democratic nomination, primarily Senator Eugene McCarthy. Some wrote in Robert F. Kennedy or Martin Luther King Jr., the heroes we’d lost to assassination only months earlier. Some punched up a third party ticket—not the segregationist George Wallace, of course, who actually carried five southern states, but some obscure leftist party or another. And a whole lot of people didn’t bother to vote at all.

The trumpet master was the hippest dude I could imagine, and he’d actually mounted a gag candidacy in ’64 promising to name musical giants to high-level positions (e.g. Duke Ellington as Secretary of State; Miles Davis as head of the CIA; Ray Charles as—wait for it—Librarian of Congress). Voting for Diz was my youthfully arrogant way of asserting my hipness and thumbing my nose at the establishment.

What did we get for our rebellion? Tricky Dick Nixon.

Would Humphrey have been any better? Well, yes. Almost certainly, history would have been a lot different if he’d been president.

Which is exactly what wiser, more sophisticated, more socially and historically aware liberals told us when they tried to talk us into voting for the Democrat. We laughed them off. We scornfully called them sellouts. We said they were old and out of touch (old meaning anyone between 30 and death). They tried to convince us that everything we cared about would have a better chance of happening under a decent, compassionate, liberal like Humphrey than the venal, corrupt, reactionary Nixon. We said they were spouting establishment bullsh*t.

But they were right.

And now, here I am, an elder, writing this to urge young people to vote. And not for a third party or a write-in candidate to make yourself feel good.

And this year, it matters more than ever. More even than in 1968. This is not a typical Democrat versus Republican, or liberal versus conservative election. This time it’s democracy versus autocracy; kindness versus cruelty; compassion versus indifference; truth versus lies; knowledge versus ignorance; empathy versus narcissism; fairness versus privilege; anti-racism versus white supremacy; climate awareness versus climate denial—and more.

And please, all you yogis and meditators and mindfulness folks, don’t use spiritual concepts as an excuse to disengage. Nonattachment doesn’t mean not caring. Equanimity doesn’t mean indifference. Maya does not mean the material world of form, change, and diversity doesn’t exist. It’s real. It’s just not all there is. There’s also a higher unity. You, too, are more than your body and your personality. You’re an infinite being. But you’re also human, and you’re a citizen of the country and the planet.

I know some of you will dismiss this message the way I dismissed my elders in 1968. I might even get “OK Boomer” messages. Fine. Go at it. Nevertheless, in all humility, I beg every young person:

Please get other people to vote while you’re at it. And please do whatever you can to make sure every vote is counted. It really does matter.