Good People Exist Everywhere—& if we can’t See Them, we can Be Them. 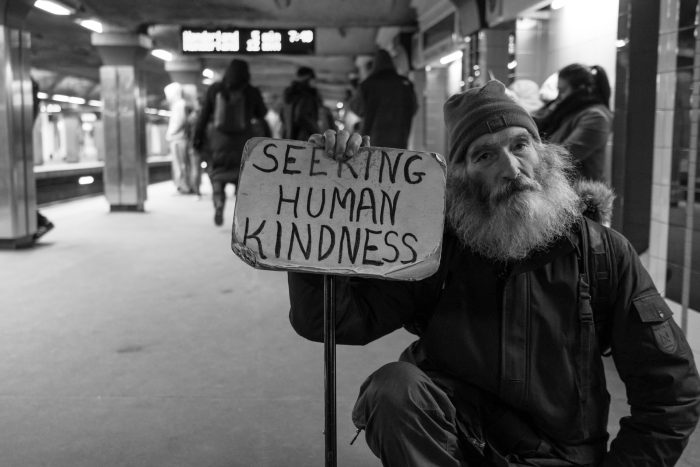 It was a frigid Tuesday in November of 2016, and the chill in the air was incomparable to the icy exchanges between families, friends, and strangers on the heels of the election.

It had been one week since my tears saturated my pillowcase when I found out that Hilary Clinton had lost and our first shot at having a female president was gone. Donald Trump was going to be our new president.

On this particular night, we were going to a gala. When my husband’s company invited us to a Gilda’s Club event on an idle weeknight, it was a welcome distraction. I was starving for anything to consume other than election news reports and a night out in New York City with my husband sounded like the perfect order. What is a gala, exactly? I thought.

I dusted off my floor-length black gown that I had worn to one of two weddings I had attended in my lifetime, and my patent leather stilettos. I got my hair professionally styled at a salon in Westfield, New Jersey and slapped makeup on my face with the most precision I could muster. My husband, Jeff, was already in New York City at a meeting, so I would be making the solo trip from suburbia to Manhattan to meet him.

The fiscally responsible means of transportation would have been the train, but as much I’d like to think I could strut like Giselle in my stilettos, I more closely resembled the trot of a newborn baby gazelle. Between sparing strangers the sight of that shoe struggle and the wintry cold, I opted for an Uber.

I wobbled out to the promptly arriving black Toyota Camry and confirmed that he was my driver. His warm smile welcomed me before I even grabbed the car door handle. Ah, new car smell. He offered me water and mints before my seatbelt clicked into place. Wow, Uber driver of the year already.

“How long have you been Ubering for?” I asked

“Oh, tonight is my first night,” he shrugged.

This was the beginning of a beautiful 90-minute drive into the heart of New York City. As we braved bridges and traversed traffic, our conversation weaved in and out of every topic imaginable. He illustrated an image of the vibrant shopping districts in Dubai that made me want him to drop me off at Newark Airport so I could take the next flight there. We even discussed Kanye West’s favorite topic—Kanye.

It felt like I had barely even blinked before the Waze app displayed our arrival time being only 10 minutes out. I unlocked my phone to give Jeff a call when, telepathically, he called me.

“Hey, babe, I’m almost there!” I exclaimed, still reeling from this newfound friendship.

“Okay, well, we have a problem. My car is dead. I can’t make it over to the gala,” he groaned. Was he kidding? What were we supposed to do?

Naturally, I told my new friend about our predicament. He immediately offered to pivot and take me to Jeff’s location. When we pulled up to the congested city street where we thought Jeff would be, he was nowhere to be found. I called him again to see if we could uncover his exact coordinates. This baby gazelle wasn’t prepared to trot all over the city streets looking for the man. The Uber driver looked back at my dismayed facial expression as I offered to just get out and attempt to find Jeff on foot.

“I’ll come with you,” he insisted. “I don’t want you to be looking for him on the streets alone.”

He pulled his car over in what we assumed was a legal spot, and we ran (aren’t you proud?) two blocks over until we finally spotted Jeff. The Uber driver walked over to Jeff’s 10-year-old SAAB and popped the hood up to see if he could help diagnose the issue while Jeff called AAA. Once we confirmed that help was on the way, we bid my beloved Uber driver goodbye.

“I’ll never forget you!” I shouted with my arm extended toward him. I meant it.

At this point, we had already missed half of the gala’s Michelin Star quality dinner while rapidly becoming a spectacle for onlookers. A man in a tuxedo and a woman in a floor length gown tapping on the hood of a dead SAAB was atypical even for New York City. Jeff’s sobbing SAAB was squeezed into an offshoot of a parking garage while patrons of a cozy pub observed our plight. We figured we might as well get a drink while we waited for AAA, so we descended down a stairway to the bar to face our newly acquired audience.

“Ay! You two are the ones with the car, huh?” a burly man with a beard and a thick New York accent called our way. “Come ‘ere let me buy yous a drink.”

He put his Iron Man arm around us and ushered us inside, parting the sea of New Yorkers with his sheer presence.

“This one’s on me!” he shouted to the bartenders who gave us a wink while they poured us each a drink. His six-foot-three frame dissipated into the crowd while we expressed our gratitude.

Our wine had just started warming our bodies as AAA pulled up to jump Jeff’s car, and we were finally on our way to the gala. Once we arrived, men dressed in coattails pulled open the venue doors, revealing crystal chandeliers dripping from the ceiling. Opulence enveloped every corner of the foyer. We checked our coats and slithered into the expansive room where hundreds of Gilda’s Club members, fundraisers, and donors delicately dined.

A seamlessly organized auction was the centerpiece in the midst of some of medicine’s most prolific minds. The Gilda’s Club was founded in honor of Gilda Radner, a Saturday Night Live comedian, who passed in 1989 from ovarian cancer. The empathetic energy was palpable in a room full of esteemed medical professionals, researchers, social workers, and donors committed to upholding Gilda’s mission of providing emotional support and resources for cancer patients and their loved ones.

We caught up with Jeff’s coworkers and told them about our eventful night preceding the actual event. After the auction, we transitioned to a reception room with oscillating lights and a vivacious DJ tearing up turntables. We left everything we had on the cocktail-soaked dance floor. We bopped to Beyoncé and dance-battled our dessert calories away.

Since dessert was the only course we didn’t miss, we made a pivotal stop at McDonald’s on our way back to Westfield and enjoyed a sacred serving of Chicken McNuggets. I made sure to skim some fries out of Jeff’s order before handing them over to him. He owed me for the running.

When my head finally rested on my pillow that night, instead of tears, my pillowcase was met with a genuine smile. Relief and gratitude washed over me when I realized that after such an emotionally daunting week, we were still capable of having an extraordinary night.

But it wasn’t extraordinary because we went to a fancy gala. It was because in the midst of all the contention in the country and all the tension we were collectively feeling—we found glimmers of hope in humanity.

Whether they were an Uber driver, a man at a bar, or a doctor on a mission for a cure, we were reminded that good people exist everywhere—and if we can’t see them, we can be them.