No America, it is not the Time to Heal.

The events of January 6th, including a noose and makeshift gallows on the Capitol lawn, suggest a growing unity between the Republican Party and white supremacists, @KeeangaYamahtta writes. https://t.co/16vuZdfVxC

In the wake of the riots at the Capitol in Washington D.C., a number of American politicians, irrespective of their party affiliation, have called for the country to heal.

Herein lies my problem with America, where I lived for several years. The peppers at the supermarket were always pretty, the tomatoes gorgeous, the Californians super fit. Everything was always pretty looking. But the peppers were tasteless, the tomatoes never flavorful, and the Californians—way too busy to forge any meaningful relationships with. I never found the words to articulate my problem clearly, up until insurrection day!

American society does not allow you to not be okay.

Let me explain with a personal example. I was laid up with a back problem last year for three months—a result of burnout, excess physical stress, and a viral infection that finally sent my body crashing. For a workaholic researcher/entrepreneur, this was the first time my brain could not function because the pain was so intense.

I questioned why was a back issue hindering my ability to work? My brain was functioning fine, and I should be getting on with work (after all, what was my identity without my work? But that is a story for another day). This was just physical pain and the rest of me was okay, and I needed to get over it and get on with it! One of my mentors had to tell me slowly and carefully, that I was, in fact, not okay. That I needed to pay attention to the pain, I needed to wallow in it, to feel it, to let it hurt, to recognize it, and to give it its time. And only then, would the healing process start.

The American need for extreme political correctness is a manifestation of this need for perfection. But it rests on shaky foundations. This extreme political correctness glosses over the grieving and wallowing—an intrinsically ugly process (unlike the peppers and tomatoes and Californians)—leading to the festering of issues instead of healing. It comes from the need to skip over the not being okay part, and that is what has led to the great societal divide and a fragile social fabric that has unraveled at the hands of just one person tugging at the string.

Calling Black persons African Americans is a classic example. Feeling the pain of the word “Black” is too much for most Americans. It displays in big bold letters that things are not okay. Black Lives Matter signboards are ripped off of people’s homes because it is a reminder of the fact that things aren’t pretty and shiny and fit and fine. It shines a mirror on the fact that the pain is still there. And instead of embracing the messy process of grief, America wants to “get over it.” They want instant healing.

In Germany, teens are taken on school trips to concentration camps to be reminded of the past, to internalize the pain, and to understand that something like that should never happen again. Imagine if no one took the time to feel and know and understand what happened. Just click “heal” and all will be good!

So no, America, January 6th happened. And it is not yet the time to heal.

I don’t think I’ve seen enough images showing how the insurrectionists brought lumber to DC and erected a real gallows at the US Capitol. Has this been on the front page anywhere? https://t.co/TxNikUWp7a 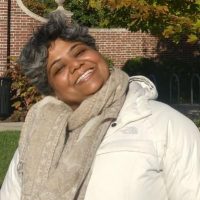 Akanksha Bapna is a scientist, an educator, and an entrepreneur, who loves to dabble in various art forms. In her words, “From time to time I like to think of this and t… Read full bio

4 Ways to Stop Dysfunctional People from Leaving their Sh*t on our Doorsteps in 2021. The 4 Phases of Leaving a Narcissist (& the Answer to “Why don’t you just Leave?”) I am Black. This is what I Need (& what I Don’t) from White Allies. Trauma Bonding: the Toxic Pattern that arises from Wounded Relationships (with Family, Friends, or Lovers).
See relevant Elephant Video