The Actual Purpose of Life (Hint: It Might not be what you Think).

There is nothing left to say (but you should say it anyway).

Two roads diverged in a yellow wood—dammit, no, that’s Frost.

No man is an island—wait, that’s no good either. How is the ghost of John Donne haunting me from my Grade 12 English Literature class?

How do I love thee? Let me count—scratch that; that’s not me either.

I wandered lonely as a cloud—hmmm, that sounds familiar too. Wordsworth, I think.

Once upon a midnight dreary—crap, that’s that damn Raven! Poe, get out of my head!

I met a traveler from an antique land—Shelley, what are you doing in my brain? Now I’m not going to be able to get that image of those two stone legs in the sand out of my mind.

Because I could not stop for death—There! That sounds good; let me just Goog—ugh. Why, Emily Dickinson, why?!

Why are all the good words taken? Years, decades, centuries of thought, of pen to paper, that’s why. There really is nothing new under the sun, as they say. There’s just slightly different ways of saying the same old things.

Do you sometimes sit there, like Rodin’s “The Thinker,” pondering the purpose of life, existence, and everything? (To paraphrase Douglas Adams.) Does that thought sometimes get to you? If so, you’re not alone.

After some of this existential pondering, I’ve come to this realization about life. About purpose. The purpose of life is simply to live. To exist. To breathe. To be. The purpose isn’t to get a great job. It isn’t to get married. It isn’t to have kids. It isn’t to buy a house (car and white picket fence included). It isn’t to live by these so-called unwritten rules of human society that we somehow all blindly seem to trudge along following, unaware that this isn’t what it’s all about.

We move along thinking that if we just reach this marker, and then this milestone, and then this goal, that everything will make crystal clear sense. That the clouds will suddenly part and the angels will sing and a lightbulb will appear over our heads, or that we’ll be like the Buddha sitting under the Bodhi tree and suddenly understand how everything works and interconnects and fits together. That the last piece of the puzzle will magically be put into place.

I’m sorry to say this, but that won’t happen. At least not for 99.99999 percent of us who are lucky enough to be alive on this beautiful planet right now. But that’s okay. I don’t think life has a purpose. That’s not said to depress you (though, my own immediate thought in my brain is screaming, “What? How can you say that?”), but it’s the reality. 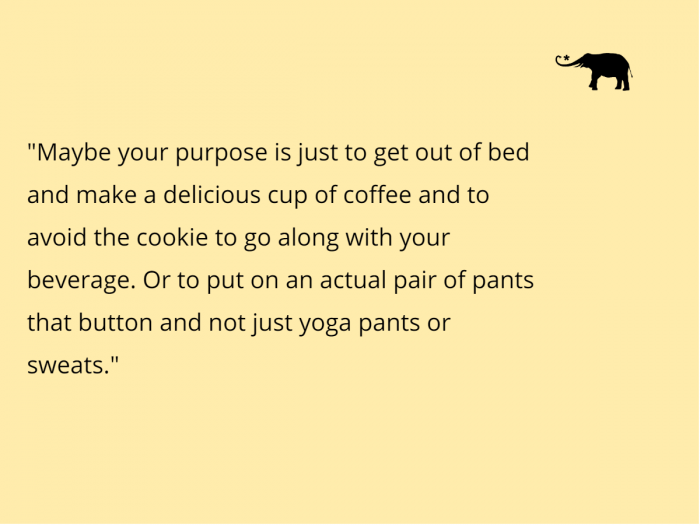 That’s not to say that you can’t find purpose, or make purpose as you move through your life. And your purpose may change. It might change daily, or weekly, or monthly or again and again across the decades. But there isn’t one overarching meaning to being alive on this earth.

Maybe your purpose is just to get out of bed and make a delicious cup of coffee and to avoid the cookie to go along with your beverage. Or to put on an actual pair of pants that button and not just yoga pants or sweats. Or maybe your purpose is to become the next Elon Musk and advance space travel, but after a few months of going down that path, you decide that a more reasonable goal would be to open your own coffee shop and bakery because you really, really like banana bread.

Or maybe you decide your purpose will be to grow your own everything and launch an organic herb and vegetable co-op, which maybe then turns into you moving to the country and going off-grid. And maybe two years down the line you’re sick of all the trials and tribulations of running a one-person vegetable empire so you decide to throw in the towel and head back to the rat race to become the next Billie Eilish because you think you have a pretty good voice from singing in the shower.

Don’t worry, we won’t judge. You do you, as the kids say. You find whatever makes you tick. You find your ikigai, as the word is in Japanese—whatever gets you out of bed in the morning.

Do you want to be the next Robert Frost, John Donne,or Elizabeth Barrett Browning? Maybe the next William Wordsworth or Edgar Allen Poe, or Percy Bysshe Shelley, or Emily Dickinson?

Yes, there might not be anything new left to say, but that doesn’t mean we shouldn’t give it a good ‘ol college try. You have nothing left to lose. We’re here to live our lives in whatever way gives us that spark, that sense of purpose, of meaning—so why not get going?

I recommend getting out of bed to be a good start.