Falling in Love with an Old Friend I just Met. 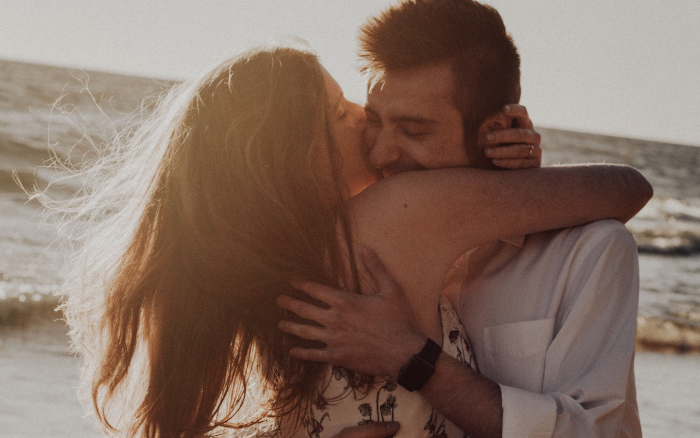 We left the lame coffee house where we started our first date and decided to take a walk on The Rosendale Trestle—an old railroad structure that was actually featured prominently in the weird John Krasinski directed movie, “A Quiet Place.”

I wasn’t entirely sure if she liked me yet. Sure, the conversation was flowing with no awkward pauses or valiant efforts to keep it moving, but I have experienced that in the past, and it guarantees nothing.

The rain began to fall a little harder, but it was a warm, late April afternoon, so it wasn’t entirely unpleasant. As we walked and she explained what it was like to be a midwife in a lower-income city, she brushed her arm against mine. I may have wanted to talk myself out of that meaning anything, but my body would not allow it. I felt a visceral tingling that something was going to happen.

We stopped by an outcropping of trees, and I looked into her eyes. Asking for consent felt so ridiculous, but just moving in to kiss her could’ve been tragic if I misunderstood the vibes.

Of course, when I did ask her, she laughed and said, “You kind of ruined the moment.” That was her sense of humor. We kissed, and it was funny and awkward, so it was a little strange, but we continued trying to do it right until it lost all of its silliness.

The rain kept falling on us, and the date went on for the next seven hours. I drove home after my bedtime, convinced that I was on the precipice of an important new chapter in my life. The path leading to that rainy kiss was windy and long.

Eight years ago, I wrote her a check for doing the placenta encapsulation after my daughter Gloria was born. I didn’t have an opportunity to meet her, but I suppose that might be considered our initial encounter. Five years after that, we met on OK Cupid and flirt-texted for three days, but she lost interest for some reason.

All of this just made our all-day date seem like it was a long time in the making. After work the next day, I drove to her house, and that felt like a continuation of the first date (with the pesky interruption of a 12-hour workday stuck in the middle).

That night, I drove home hours after I usually go to sleep, and my brain was trying to nudge me into believing that I was falling in love. I think I actually said, “Shut up!” out loud as if I was admonishing an obnoxious kid. Which is a great description for my heart—an obnoxious kid who wants what it wants when it wants it.

This week, I wanted to be with my newfound friend every single day. I found myself doing whatever I had to do to make sure I was on her doorstep at 8:30 every night this week.

The thing is, she doesn’t feel like a new friend. She feels like an old friend. An old friend I just met.

Now, pay attention because I am about to hit you with the portion of the article that may be of some benefit: at middle age, where we two happen to be at this moment, dating is a precarious activity. If you are up on your attachment theory, you know that there are four basic attachment styles: anxious, avoidant dismissive, avoidant fearful, and secure.

It is not a stretch to say that anyone consistently on and off Match.com who is over the age of 40 is likely one of the first three types. It has been determined by smarter people than me that secure people are generally found in successful and happy long-term relationships.

Knowing that we probably both have some challenges in the relationship department does not preclude the possibility that we can enjoy each other’s company for the foreseeable future. It is, most likely, going to present its own set of challenges.

I feel equal to the challenge, and I get the impression that she does, too. If I have learned anything over the past several years of dating, it’s this: it is not for the faint of heart.

Essentially you have to choose if you’re down for a little effort or able to remain alone. This is something you need to decide for yourself.

I have never been one to commit to the fruitless, but when you fall in love with an old friend you’ve never met before, it seems like you might be off to a great start.