How my Father’s 75-Year-Old Story Helped me Confront my Grief. 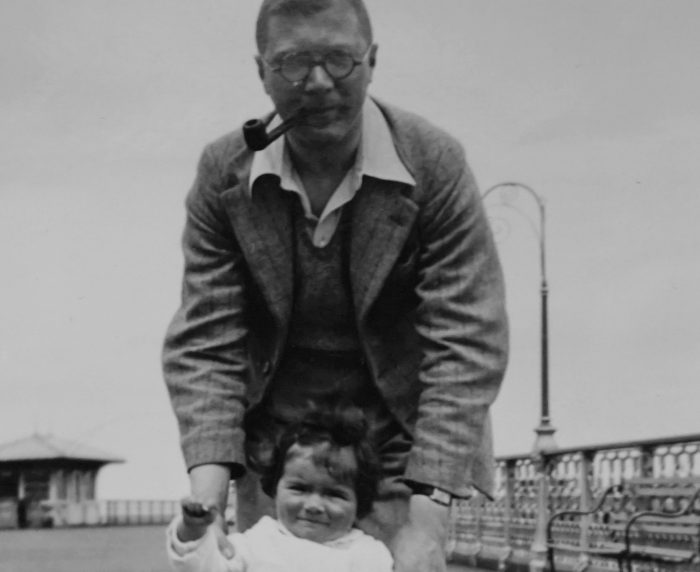 I have heard grief described as a tsunami. I imagined that it would be a powerful imploding force washing over me, leaving me broken but clean and pure.

I always thought grief was time-restricted, coming hard and fast, and leaving as quickly as it came. I thought that because I had time to prepare and saw it coming, I could process it quickly.

This was not true. Grief is a sneaky thief. It comes and goes recklessly, catching you at moments you deem inconvenient. I always pictured it confined to the dark of night while I was looking at the stars or something.

Nope. Grief never stays consistent; grief changes itself constantly. It clutches you when you’re going about the ordinary business of living, but no one told me that. I wish I had known about the furtive stealth of it.

Yesterday as I was hurtling down I-87, admiring the white birch trees that line the highway in the Adirondacks, chatting with my mother when she told me the story of my recently deceased father’s job of shining shoes at the 103rd Street subway station to pay for his Catholic school tuition.

I smiled at the image. A rumpled, earnest boy with a chubby face hawking his services. I felt so much pride in his maturity and drive. An 11-year-old boy wanting to take the pressure off his parents. “I am sprung from this,” I pridefully reflected.

The tale made me feel a sting of bittersweetness. My mantra after he died was “I was so lucky to have had the extra time with him.” You see, my father survived a cardiac arrest four years ago. He fell in an airport parking lot, and if it weren’t for the quick intervention of an attendant and my sister who knew CPR, he wouldn’t have made it.

Then, the image of a young boy hustling while shining shoes appeared.

Last year, I was numb with fear as COVID-19 washed over New York and my small community hospital. Thrust into a makeshift ICU, I went into a fight-or-flight autopilot as did the rest of the registered nurses whom I work with. I would give myself a pep talk and create a to-do list as I gowned and donned layer after layer of PPE.

>> Comfort when you can.

>> Talk to the families when they call.

>> Give their meds on time.

>> Set up the iPad if their families want to see them.

I’d shower at work and then again, at home. I’d scrub the bathroom and retire to the spare bedroom. My biggest fear was that my vulnerable loved ones would succumb. I became a broken record imploring my parents in Florida to mask up and stay put. I shipped some face masks and began to wait. It seemed endless.

“Here Comes the Sun” by the Beatles was ringing out at my hospital as people began to be discharged and successfully taken off their breathing tubes. The charts and line graphs depicting Covid-19 began shifting downward. I felt a gust of hope. I planted dozens of tulips in my garden to enjoy the following year because I grew more confident of better things to come.

The vaccine further lifted my spirits. “It’s just a waiting game. Keep your head down and your eyes on the prize,” I told myself.

Then, the second post-holiday wave hit. “Hunker down, ride this out.”

My father died 11 days after he received his second vaccination.

It was a blur of stinging remorse. He came so close to outrunning this. The prevailing theory was that he became infected in between receiving the two vaccines. He died on February 16th, quite possibly the 500,000th person in this country to do so. At the time of writing this, the virus has marched on, killing another 88,000 people.

We are slowly reopening. My family has gotten through the minutiae of the funeral and arrangements. Every day, we are told about new increased venue capacities and closing-time changes. Ball games, restaurants, and parties are back on. Broadway is scheduled for September. I feel like we are emerging from a dark cave, shielding our eyes from the sun—ever cautious that it might burn us.

I know I share my grief with 3.3 million families and friends around the world. Many are experiencing the same loss and regret that I am. In the meantime, I hang on to my mother’s every word as she explains that families traded their rations back in World War II. While her family of 10 never went hungry, they didn’t have gas to drive their car.

I don’t want to ever miss another story.

I have a good friend, Jacky Grossman, who publishes many stories of her brave mother living in bombed-out bus shelters in Nazi-occupied Hungary. I used to wonder how Jacky got the strength to relive such a painful narrative. Now I understand that she is telling of her mother’s resilience and spirit.

As we reopen, take the time to learn the stories and histories of the people you love and perhaps lost. Learn the funny and the painful. Learn how they coped and what they felt. Then, their version of the story will flow through your veins and become part of your narrative. Your children’s children will tell it. They will never leave you.

I see the sun slant through the trees in the fading afternoon light. Then I feel it. I close my eyes and the replay of his life washes over me. In my mind’s eye, I can see the crowded subway platform in the 1940s.

The little shoe-shining boy is smiling at me.

More about grieving the fathers:

Margaret Bravo is a wife, mother, daughter, nurse, and triathlete. She is also a lover of great food, books, firefly evenings, and laughter. … Read full bio