The Rocky Road to Forgiveness: How to Let Go of Anger & Move Forward.

Like for most people, forgiveness didn’t come easily to me.

Not because I wanted to get revenge, or demonize the person who had hurt me, but merely because I didn’t know how to do it.

I could not just “stop being angry,” could I?

I read all about it, especially the famous sentence, “You don’t forgive because the person deserves it, but to free yourself.” But I couldn’t make sense of it. I understood perfectly that my anger gnawed at me. But dropping it seemed like dropping all protections against those who had wronged me. That simply looked dangerous.

I was lucky because life brought me the exact kind of challenge I needed to understand how to do it: a guy I had a crush on for several years.

I’m not going to tell the long and complicated tale of what happened (and what didn’t happen, at that)—between us, you just have to know that he hurt me in many, many ways, for things big and small.

Rationally, the right action would have been to simply walk away and stop all communication with him. But I’m used to trusting my gut and in this occurrence, and it didn’t feel good at all to just leave. My rational mind yelled at me that I was just being cowardly, but it was really not like that.

In fact, it felt brave to stay, like I had something to learn from the whole experience and my gut wouldn’t have me leave before the learning was done. But it was uncomfortable as hell, because I was a raging furnace of built-up resentment.

I had forgotten one super important element of the equation: myself. It took me literally years to finally realize that I—that is, my anger and outrage—was in the way of my own understanding and liberation. Slowly, the awareness dawned on me that there was no point leaving the situation if I stayed angry and resentful. I would just be angry, resentful, and away. Not a big win.

It’s not enough to stop having dealings with a person who’s causing you pain. It doesn’t magically change you into a calm, healed, peaceful version of yourself. You still have to do the work. In my case, I knew I would rather do it while staying near the person, for the possibility to maybe “have the talk” and work things out.

But to be in a position to do so, I needed a different appreciation of the situation. And a different nervous system. Like, not one hovering at “red hot wrath” level.

In all situations, anger is like an allergy: it worsens things. When you get stung by a bee, the venom is indeed toxic. But for a grown-up human, the dose is mostly harmless. However, if you are allergic, you can have far more severe consequences. But it’s no longer the bee that’s hurting you, it’s your own immune system gone crazy.

Slowly, it dawned on me that my own anger was the main source of my suffering, not his actions. Yes, they had been less than ideal, there was no arguing that. But I didn’t need the burden of my own allergic reaction. I finally understood I needed to forgive him to feel better.

It was easy for me to be willing because I was exhausted from my own attitude. But I didn’t know how to do it. So, I set the intention, and every time I felt a burst of anger, I breathed out deeply and thought, “I release this anger, I forgive him.” I had no idea how it would happen (and that worried me quite a bit, to be frank), but I was open.

After a relatively short while, I felt like the anger was no longer overwhelming, but manageable. Also, my intuition started consistently insisting that I reexamine his behavior with eyes unclouded by hate. It was time for an honest face-to-face with the man, and I was ready to be curious and ask questions, instead of being defensive and pointing fingers.

Because of COVID-19, it had to happen on the phone. To cut a long story short, my willingness to look at the whole story—and at him—from a new (and allergy-free) perspective changed everything. I was able to explain instead of yell, express instead of blame, and for the first time, he truly realized how his behavior had affected me.

There were honest, heartfelt apologies, and thanks from both sides. But above all, the both of us were relieved and released because the dynamics between us had truly changed—as if a psychological equivalent of the Berlin Wall had started being taken down.

After that, if I wanted us to have a chance to become real friends and not just the flotsam and jetsam of a failed romance, I had to complete my forgiving process, because there was still some hurt and resentment weighing on my heart and obstructing safe connection to him.

Closure doesn’t immediately change the course of our emotions, you see. There is a convalescence. There is a recalibrating to do. And in many cases, you don’t even receive closure like I was lucky to have. You have to give it to yourself and still do the work.

Thanks to my “preliminary phase,” I now had practical training in forgiveness, and I knew how to do it: you just kindly refrain from revisiting past hurts. When they resurface, you simply walk away. And you keep doing that as long as you need to.

What keeps the pain alive is merely its constant reactivation. Not feeding the troll is enough to starve it.

After some time, your system adjusts and completely releases the physical and neural tensions that manifested the resentment. Often, that release takes the form of nightmares or big shivers and sobs: that’s your body “going out of shock” and “erasing files.” You are shaking out the old energy.

How you choose to behave with the person who has hurt you is completely disconnected from your willingness to forgive. You are at liberty to sue them, leave them, or start a fresh and honest friendship with them. But you will do it lucidly and calmly, not as a reaction to them but as an empowered choice.

Forgiving does not mean condoning what was done. It means giving your system the green light to purge the very foundations of your pain and outrage, like removing a bullet from a wound. When the bullet is out, the wound can close.

And if it feels like it’s the best thing to do, you can still go to the police and demand justice. Or bless the person with all your heart and wish them the best.

Your choice, your freedom. 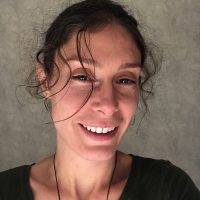 Elisa Bes is a French, English-language enamored holistic coach and reiki teacher. Her jam is to help individuals with original, atypical minds to find out who they are, and b… Read full bio