The Zen of Learning to Ride a Motorcycle: Always Look in the Direction you Want to Go. 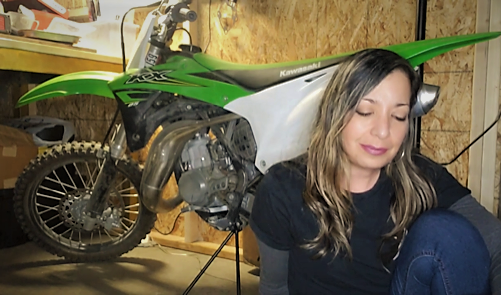 *Author’s note: This is part two of a 10-part series called The Zen of Learning to Ride a Motorcycle. Each part will tackle a zen habit or principle on good motorcycle riding skills.

There is something in motorcycle riding called target fixation, which is considered a reaction to panic. It happens when you are focusing on something that you don’t want to hit, and ultimately, end up hitting it. Sometimes, it happens during motorcycle racing events. One rider might take a turn too wide and go off the track, and the rider behind them, seemingly hypnotized by what is happening, follows the first rider right off the track too.

When you’re on a motorcycle, wherever you are looking is where the bike will go. If you want to make a tight turn, you have to look into that turn. If you look down, the bike will go down, if you look at a van parked on the side of the road, the motorcycle will head right for it.

The same is true in life. If we are focused on avoiding the things in life we are afraid of, or what we don’t want in life, we are guaranteed to bring that energy we are trying to avoid into our life.

I had a yoga teacher named Travis Eliot who would always say, “Where the mind goes is where the energy flows.” And I find this to be true both while riding a motorcycle and in life.

When I was shopping for my first street bike, I was having anxiety about learning how to shift gears, while also learning how to turn, pay attention to traffic, be mindful of street conditions, and use the brakes properly.

I wanted to learn to ride a motorcycle, but I was also thinking about how I didn’t want to learn how to shift gears on a street bike if I didn’t have to. I had gotten a Kawasaki KX85 dirt bike. My husband felt that I should ride that bike for at least a year before getting a street bike, and to make all my riding mistakes in the dirt, instead of in traffic.

But I got impatient. Taking the dirt bike out is a day-long process. We have to prep the bikes, tow them about an hour outside of the city, go down some dirt roads, change into our gear, and, then ride for a few hours before sitting in traffic on the way home. I wanted more opportunities to practice than the dirt bike was allowing me.

I had taken the Motorcycle Safety Foundation (MSF) course before taking my dirt bike out for the first time, and I was really itching to practice on a bike—any bike—as much as possible. While taking the MSF course, I got to try out several different motorcycles: a Yamaha V Star, a Honda Rebel 250, and a 2012 Zero XU. Based on those experiences, I started shopping for a street bike.

I loved the cruiser look of the 2015 Honda Rebel 250 and the 2017 Yamaha V Star, but I was really in love with the ride of the 2011 Zero XU, which was an electric motorcycle. It wasn’t the prettiest bike in my opinion. The seat was a bit too tall for me, but I still felt safe and in total control, even when stopping with one foot down. Best of all, it had an automatic transmission, so I didn’t have to focus on shifting gears. I figured I could use the dirt bike to practice shifting gears.

I also took an extra private lesson with one of the MSF course instructors to focus on shifting gears after I’d gotten my motorcycle license.

So, based on my experience on the Zero XU, I started focusing on finding an entry-level motorcycle with an automatic transmission. Honda had several options (The NC750X, the Goldwing, and the Africa Twin), but they were all too tall and powerful for me. Zero was no longer making the XU, but the Zero S was one of their smaller, less powerful naked street bikes, which I thought might be comparable to the XU.

So I went for a test ride. But the Zero S turned out to be too tall for me. However, the dealer said they could lower as well as shave down the seat for me, so I went for it; I bought the Zero S. I figured it weighed less than 350 lbs compared to the Honda Rebel 300, but it had an automatic transmission. I also figured that I had the experience on the Zero XU, so even though the Zero S was more powerful, I’d eventually grow into it.

But, I wasn’t looking in the direction I wanted to go when I was shopping for my first street bike. I was focusing on what I didn’t want, instead of what I wanted.

Ultimately, what I want is to learn how to ride motorcycles. What I didn’t want was to make things more difficult for myself than necessary.

What I found out with my Zero electric motorcycle is that I was spending as much time learning how to manage 78 lbs of torque, learning to brake with one foot down, and learning to keep my hand from accidentally hitting the throttle when I’m coming to a stop, as I would be spending time learning to shift gears on a less powerful, less expensive motorcycle.

I have a friend who recently became single and found herself feeling really vulnerable as she reentered the dating pool.

She was wondering how to read into an unanswered text message after a recent date. I recommended she not read into it at all, because it could be a million things, including the fact that he may not have gotten it. She then asked me, “What am I supposed to do? Just put myself out there and be vulnerable?”

What do I want more? To learn to ride or to not be scared? There is no way to learn how to ride a motorcycle without experiencing some healthy fears at some point. It can’t be avoided; it can only be overcome.

Remember, as my yoga teacher used to say, “Where the mind goes, the energy flows.” So, make sure your mind is looking in the direction of your dreams rather than your fears.

And always look in the direction that you want to go, not where you don’t want to go. 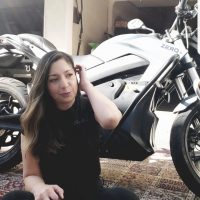