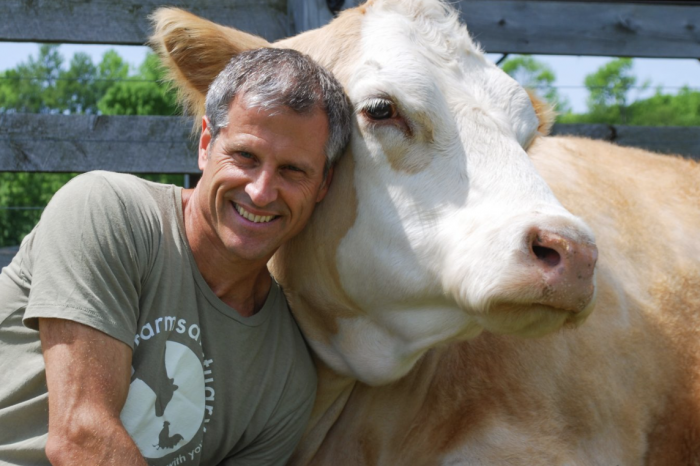 Waylon talks with the amazing Gene Baur, co-founder of Farm Sanctuary, on veganism; the Webby Awards; opening up our hearts and falling in love with empathy, mindfulness, and responsibility; and the inspiring, saving-the-world-from-climate-change work of Gene and Farm Sanctuary.

Farm Sanctuary is the only non-dog, cause-driven nominee in the “Best Animals on Social” category. Let’s show the world that farm animals are every bit as deserving of love, respect, & consideration as the cute dogs who so often dominate our feeds.

In a Webby race that says everything about our evolving attitude towards animals raised for food, your vote can help bring critical visibility to the most abused beings on Earth

Demonstrating a seismic shift in the way mainstream society views farm animals, Farm Sanctuary, America’s first farm animal sanctuary and advocacy organization, announced today that it has been nominated for the highly competitive “Social: Animals” category in the 25th Annual Webby Awards. Hailed as the “Internet’s highest honor” by The New York Times, The Webby Awards, presented by the International Academy of Digital Arts and Sciences (IADAS), is the leading international awards organization honoring excellence on the Internet.

As a nominee, Farm Sanctuary is also eligible to win a Webby People’s Voice Award, which is voted online by fans across the globe. From now until May 6th, Farm Sanctuary fans can cast their votes online.

Since the dawn of the digital age, dogs and cats have been the darlings of the Internet, with thousands of social accounts dedicated to their adorable antics and millions of followers relying on them for their daily fix of warm fuzzies. As the only non-dog, cause-driven nominee in a category traditionally dominated by pure-bred dogs and cats, Farm Sanctuary’s social accounts take a different tack, pulling back the curtain on the animal agriculture industry through tales of rescue, survival, and farm animal sentience—all set alongside stunning, emotive portraits of the residents that call Farm Sanctuary home. These accounts stand as a testament to the fact that the public is just as likely to fall in love with a cow or chicken as they are a dog or cat, if only they are able to truly see them.

“For over 35 years, we have been fighting to make farm animals visible by helping people see them as the thinking, feeling individuals they are,” said Farm Sanctuary Chief Communications and Brand Creative Officer Marie Jones. “We are deeply honored to be a Webby nominee, but a win would truly bring critical attention to these animals on an international scale—earning them the consideration they so desperately need and deserve. A vote for Farm Sanctuary is a vote for the billions of farm animals suffering in the animal agriculture system.”

“Nominees like Farm Sanctuary are setting the standard for innovation and creativity on the Internet,” said Claire Graves, Executive Director of The Webby Awards. “It is an incredible achievement to be selected among the best from the 13,500 entries we received this year.”

Winners will be announced on Tuesday, May 18, 2021, and honored in a star-studded, virtual show that will be available on demand. The celebration will be hosted by multi-talented actress, writer, podcaster, host and advocate Jameela Jamil. Winners will have an opportunity to deliver one of The Webby Awards’ famous 5-Word Speeches. Past 5-Word Speeches include: Steve Wilhite’s “It’s Pronounced “Jif” not ‘Gif’; NASA’s “Houston We Have A Webby”; and Solange’s “I Got Five On It.”

Founded in 1986, Farm Sanctuary fights the disastrous effects of animal agriculture on animals, the environment, social justice, and public health through rescue, education, and advocacy. The organization provides lifelong care for animals rescued from abuse at Sanctuary locations in New York and California; fosters just and compassionate vegan living; and advocates for legal and policy reforms. To learn more about Farm Sanctuary, visit FarmSanctuary.org.

About The Webby Awards: