We’re Looking for Love in all the Wrong Places.

I started making the list of attributes my future husband would have when I was 16.

One of the other girls at church told me about it. Apparently, it was a good thing to reflect on and pray for.

“You should also be praying for your future husband. Not to meet him, but that he stays safe and walking with the Lord.”

It seemed like a nice thing to do, both the list and the prayer. Another girl said that she had been writing letters to her future husband, something that she’d read about in a book about purity. I didn’t do that. (I had my limits, after all.)

As time went on and I dated young men through high school and my college years, I began keeping two lists: a list of good traits my dream man would have and a list of deal-breakers. It didn’t help me much. A man could tick everything off the “good traits” list and have a bunch of deal-breakers too. And quite often, I would only discover the deal-breakers after a relationship ended.

“I need a boyfriend who drives and has his own car,” I had written in my 20s, not understanding that it wasn’t the license and access to a car that was the problem; the real difficulty would be boyfriends expecting me to pick them up and drop them off, or worse, taking my car without asking.

Eventually, I stopped making the lists. They didn’t seem to help anyone, including me.

After my marriage ended and I decided I was ready to date again, I never even considered making a list. I went with the trial-and-error method, no longer trusting my systems.

Swiping through the pictures on dating apps, I found myself excluding people instantly:

All his photos have his dog in them. He says he’s a “big kid at heart.” He likes banter.

His profile is mostly just a list of places he has traveled to.

If you’d asked previous versions of me, I would have said all of those things made a good match. I thought I was a dog person, and frankly, I’m quite sad that my passport has been sitting around, not being stamped, for a long time. Bantering with my friends over late-night pizza was my favorite thing to do in college. I’m a big kid too: I like roller coasters, collecting things, and I have a reasonably sized plushie collection.

I decided internet dating wasn’t the best thing for me and logged out, but I didn’t entirely delete my profile—just in case.

Magazines and romance novels had always been one of my signposts in life. Church gave me my spirituality, mysticism, and many of my long-held values, but romance novels were where the magic truly lived. I loved books about people falling in love with a high school sweetheart or a meet-cute involving spilled coffee and a cute widower.

Magazines guided me through high school: I read (and reread) articles like The Biggest Guy Lie: I’ll Call You and 10 Ways to Get His Attention TODAY. While I was in college, I read that I should point my feet at the most important person in the room to get “his” attention and not to hold the straw of your cocktail too close to your mouth (it’s too pretentious).

In the real world, though, none of this stuff really mattered. Sometimes boys would call, and sometimes they wouldn’t. All of my hair flipping and dangly earrings to offset my round face didn’t really matter. If a guy likes you, he tends to like you with or without smoky eyes or a good lip liner.

I have never met a love interest in a night class, though I have taken a bunch of them. But I have met them at church, in pubs, at work, on the internet, and through mutual friends.

Where was the truth in all the rules?

I suspect it was lurking somewhere in the middle of all of that.

I have spent a bunch of time considering my friends who have been in long-term relationships. For some, what started as two church kids getting together has resulted in a marriage where God isn’t at the center—if he (or she) exists at all. For others, it’s been people who make music together—and keep making music together, and probably will forever and ever. And for almost everyone, it’s just two imperfect people who are the same kind of weird, and they make it work.

I’m still looking for my weirdo. Maybe we’ll meet after the pandemic is over. Or, maybe he’s just hanging around the park, coffee in one hand and a book in the other, and I just don’t go to the park often enough to see him.

After everything, I still like to believe in magic. But the lists have been banished to the bin. 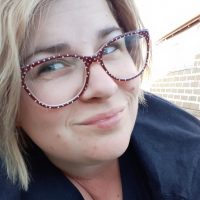 Lisa Birch is a writer from Adelaide, Australia. She has an extensive mug collection, a Masters degree in Creative Writing and a ragtag team of cats named for two exceptional … Read full bio