The Question that Women do Not Want You to Ask Them.

Especially here in the west, we pride ourselves with our free society.

Free to be yourself.

Free to express yourself.

Free to speak your mind.

I, too, believed that fervently all my life. More or less, of course, it still stands true.

And yet, I have to say—especially since I have been coming to the latter half of my “childbearing” age and also as a mother—I have slowly realized that there are culturally prescribed expectations from which we can rarely escape.

I am sure I’m not the only woman who has had colleagues ask her: “And? How come you don’t have kids? Not want any or simply not found the right one?”

I remember thinking that this was such an intrusive and personal question. It annoyed me so much that I replied to said person, “And you? Are you still getting laid after 20 years of marriage? Or is it a dry and lonely road you stare down on?”

He laughed, I smiled, and he never asked me a question like that again. But it is pretty telling that the first set of questions still seems somewhat acceptable, whilst my set of questions doesn’t.

Because the majority of us are still so preconditioned that, often without malicious intent, we simply believe this is the path everyone happily takes, unless they can’t due to circumstances out of their hands.

When I was pregnant with my first child—but unmarried and unengaged—two female friends asked me, “But you guys are getting married before the birth, right?”

Again, why, in our “free” society, is marriage a precursor to having a baby? Why is it still more usual to quickly force through a wedding than to have a child without one? It is completely unnecessary. Because we are pack animals and we want to belong. Depending on our family’s and wider societal expectations, we will take the path of least resistance in order to be welcomed once more into the bosom of general acceptance and perceived safety.

“There are some tax advantages,” my friend tells me.

My friends, by the way, are both academics, one married and the other not, one with children and the other not. I would class them both as forward-thinking, intelligent, and tolerant women. This just underlines the notion that, half the time, we don’t actually know what we believe and what we really want. We were being told, not with a wavy forefinger, but in certain terms by our parents, our colleagues, Hollywood, and, frankly, even children programs what was expected of us.

When I was showing off my growing baby bump over lunch with a friend, who knew I was in a committed relationship, he asked me, “Who is the father?”

He would never have asked me this question had I been married.

“I don’t know,” I said cynically, “but I sure hope it’s my boyfriend.”

But I am tired of constantly joking or provoking my way out of these questions. I remember 15 or 20 years ago (probably before DNA testing became easily accessible), a statistic was published, estimating the number of children born in marriage that were not actually the biological children of the father at 10–20 percent. Since then, this number has been substantially reduced, but it still shows us it is all just perception.

Marriage does not buy you a faithful partner or never-ending love, as much as living alone does not mean you are lonely and unloved.

And having a child with your partner without marriage does not mean you are not committed to them. I don’t quite know whether to laugh (it off) or cry about the fact that the assumptions on how we should live are still as prevalent as they are today.

But the fact remains that it does cause people suffering.

A man is a “forever bachelor” or simply “doesn’t want to settle down.” Often, certain traits that are attached to them work in their favour. Let alone the fact that people attribute a particular amount of masculinity to those traits such as “lonesome wolf,” “womanizer” or “silver fox.”

Yep, I’ve heard them all!

Even my friend referring to her noncommittal lover as “Peter Pan who does not want to grow up” has a somewhat endearing ring to it. But I do not remember anyone attaching similar attributes to my former female boss, who, at 45, had a shining career, no kids, and no husband but plenty of dates. In her case, suggestions of “high maintenance” and “too picky” were definitely heard during the odd after-work drinks.

Please, stop! Just stop asking women when they will have babies, why they aren’t married, or why they chose not to be in a relationship.

I personally think this is just as intrusive as asking people about the ongoings in their marriage. If we choose to think or hope that marriage is the fulfilment of all we desire, yay, it might be! But most people do not live out their desires in marriage. Too much is at stake all of a sudden. If you tell your partner that you aren’t attracted to them anymore after 15 years of co-sleeping, and would much rather lie with Mariam from the office, it might rock the boat a little too much.

For many, being married is a great milestone, and by no means do I want to question that, but milestones are usually called this way because they require a laborious commitment to reach. Hardly a permanent state of party continuing on from your wedding night.

I don’t want to offset one against the other. There is no better or worse. But there is a right choice for each of us, and when we are given the freedom to navigate our way through the options and enquire which path could bring us fulfilment and joy, then it will make each of us happier.

For this year’s Women Equality Day and beyond, I wish we could all come together a little bit more, people from all sides. We have a right to make our own personal decisions, and the emphasis is on personal.

Let’s respect each other and each other’s sensibilities enough to sense when the friendship or relationship allows for such delicate questions.

I find that in the right circumstances with the right people and the right trust, we all can and want to open up. We can try and learn from one another, our fears, our hopes, and our decisions.

We can ensure that this “free world” we are so proud to live in lives up to these standards of freedom to choose and, above all, the freedom of unfettered self-expression. 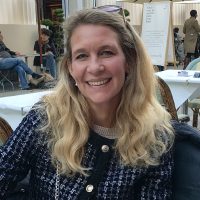 Tina Wirth: a mother, lawyer, yogi, and part-time writer, covering themes of self-compassion, love, human interaction, and all the juicy challenges they bring on the ongoing j… Read full bio