Why Dating An Atheist Will Never Work For Me.

In my late 20s now, I’m seeing myself slowly emerging from the ambiguity of dating.

Slowly beginning to see more clearly what I want in a man and what I don’t want. While this is something that is continuously changing as we grow and evolve, that diameter between being experimental and being sure-footed is shrinking.

There’s a sense of ease in feeling that I’m a few steps closer to knowing what I would like in a partner. It saves enormous amounts of energy because rather than considering the potentiality of someone and being open to all experiences, I am tucking my antenna in, and listening to the deeper values I have and letting that guide my decision-making instead.

Living in Australia, I’ve come across many atheists in my dating experiences. It’s not a particularly religious country. It is actually hard to find someone on the same spiritual wavelength. I come from a Muslim background, and I identify as Muslim in many ways. However, I’ve also let go of that label more broadly, and I don’t strictly adhere to “Muslim ideas” or rituals like I used to. In saying that, I still consider myself a deeply spiritual person. In fact, it’s one of the top three values that I live by.

I’ve been on a journey of healing my relationship with God, and the relationship I’ve had with Islam that was tainted by cultural perceptions of right and wrong rather than actual doctrine. You could say I’m reclaiming God back from religion. It is amazing how culture and religion when combined can often create mythical ideas, and spiritual truth is left by the wayside—an inconvenience, in favour of bigotry and confirmation bias.

I’ve never been attracted to Muslim men who are strictly religious, and I’ve often found myself dating atheists, not because I agree with their beliefs, but because they seemed to have a sort of carefree quality that I was looking for. They seemed to be interested in having unconventional conversations (which I craved). I wasn’t looking for atheists, but it just seemed to be the case in an environment where what I was looking for was becoming more like a unicorn dream.

In my years of learning and unlearning about religion and spirituality, I now perceive myself as a Pantheist with predominantly inherent Muslim values. Panthiesm is the belief that all religions and spiritual practices are all-encompassing and connect us directly to the divine. It doesn’t have the same separatism that religions have, which is why they end up fighting each other over who is more right. To me, they are all right. They are all pointing us to the same spiritual truth. Muslim, buddhist, Christian—it doesn’t matter. Even extremely rational scientists can often go down a deep rabbit hole and ultimately they find themselves equally confronting the depth of the universe.

So as I find myself expanding my definition of God and faith, it has become so hard to find an atheist man attractive. It’s a person’s spiritual demeanour that I find most captivating.

I have been through so many revolutions of the soul and of the self, that I simply cannot find a man who believes in nothing, a man I can relate to.

This isn’t to say atheists are bad people, absolutely not. Some so-called “spiritual people” have done so much toxic spiritual bypassing, and there are spiritual narcissists out there, hiding themselves behind a facade of “good vibes only.” A lot of wars have started over religion, too. In fact, some of the best people I know are atheists, some of the more intellectual minds out there are atheists—and I have deep respect for them. But I’m not entering a relationship with them.

A relationship needs common ground, and to be so liberal in abandoning our fundamental values and accepting all is naivety. Because at some point, there will be a clash. There will be friction. There will be ways you will want to raise your kids together on certain belief systems.

My entire day is often a dialogue between my mind, my spirit, God, my higher consciousness, and others. To be with an atheist has proven to be, quite frankly, boring. Sure the conversation can be stimulating, but what I’ve realised lately is that there is an expiry date on that. When a person deep down has no connection to the deeper mysteries of life, the humbling effects of prayer, and the inner peace and wisdom that comes from connecting to a higher power, I find that they can often be one-dimensional. Conversations become boring after the sparks wear off and the true test of a relationship begins.

If a man has no faith nor an open heart for the mystery and wonder of creation, but simply sees life as an indulgent ride, I am not interested.

If a man works and makes day-to-day choices that only serve him and not the greater good, I am not interested.

If a man sees himself as the center of his own universe, rather than the fact that he is just a guest on this planet, I am not interested.

In the words of Bob Dylan, “And but for the sky there are no fences facing.” I cannot be with a man who thinks there’s a metaphorical fence between the earth and the sky, that there are purely scientific conclusions to be drawn about why we are here on this earth. I want to be with someone who believes that there’s no barrier between his deepest self and the vast unknown. A man who integrates both science and mysticism, to me, is a well-balanced man.

May we all find what we are looking for, and may it be a resounding yes to all that constitutes a fulfilling life. 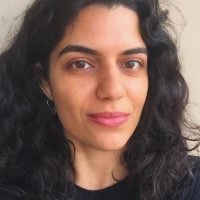