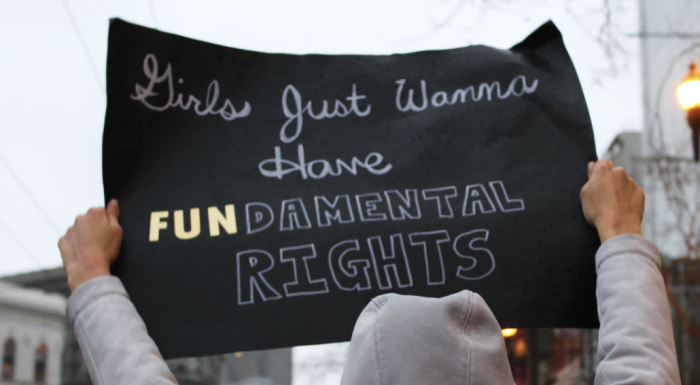 “A Texas law banning most abortions after six weeks of pregnancy went into effect Wednesday, despite the 1973 Supreme Court decision that established a constitutional right to the procedure, making this state the most restrictive in the nation in terms of access to abortion services.” ~ The New York Times

The new ruling in Texas, known as SB8, considers life at the first detection of a heartbeat, which is typically at about six weeks.

This is about 18 weeks or four and a half months earlier than the legal standard set by Roe v. Wade, which allows abortion up until 24 weeks, roughly the point when a fetus can survive outside the womb.

Even as SB8 went into effect, many people denounced the new law including Supreme Court Justice Sonia Sotomayor, who seriously did not hold back. “The Court’s order is stunning,” her dissent begins. “Presented with an application to enjoin a flagrantly unconstitutional law engineered to prohibit women from exercising their constitutional rights and evade judicial scrutiny, a majority of Justices have opted to bury their head in the sand.” She went on to call the law “clearly unconstitutional.”

I have seen a sprinkling of posts by men regarding the gigantic step back to the Dark Age that Texas has taken. I see women jumping up and down all over social media. Where are their men?

I keep waiting for the article in which a 35-year-old husband expresses his white-hot rage that his life and the life of his family is forever changed by a handful of crusty, old white men who decided they would be in charge of what could happen to his wife’s body if they were to become pregnant.

Where is the father of four young women who is irate because we make plans and God laughs? Let’s face it, sh*t happens and when it does, his daughters will either be packing a suitcase or taking themselves underground to find a way to end an unwanted pregnancy.

This bill doesn’t make young pregnant girls want babies, and it certainly doesn’t make them more qualified to be parents. It equally affects families who thought they were “done” or aren’t in a position to take on more than they have.

How many single mothers will be left holding the bundle? Let’s face it, if mama is the incubator, most of the aftermath falls on her shoulders, especially if baby daddy makes a run for it.

The law is crippling to those who become pregnant as a result of sexual violence or incest. Which of the white men who created this bill is going to be willing for his daughter to have the baby who was created out of such traumatic circumstances? (Don’t all stand up at once.)

I think it’s safe to say that a majority of women who are six weeks pregnant are likely not even aware they are—particularly if they’ve never been pregnant before. So, a female has two weeks after being raped to pull her emotional self together and make a rational decision.

What could go wrong? What a safe and loving environment that will create.

The law prohibits abortions before many women even know they’re pregnant, and it will be hard to challenge in the courts. This ruling will be an obstacle for all women of childbearing age. However, “it will create nearly insurmountable obstacles for certain vulnerable populations. Among them teenagers who don’t realize they’re pregnant until later in their pregnancy; low-income people who need to find $550 to cover the cost of the procedure; and people of color, including undocumented immigrants…about 70 percent of abortions in Texas in 2019 were provided to women of color.”

Is this new law racist at its core?

Do lawmakers think this ruling will keep people from having sex?

No, hell no. Abortion bans don’t stop abortions from happening. It just makes them unsafe. “Abortion providers in Texas estimate that 85 percent of patients seeking abortion are at least six weeks pregnant and would be denied care under the new state law…there are seven million women of childbearing age in Texas.”

Social media is lighting up with staggering implications of about this law. How many women were responsible for creating this ruling? Was there even one woman involved in this decision? Hmmm. The wild, wild west gets wilder by the minute.

“In Texas, you can’t harvest organs from someone who died without their consent—but Texas’s new abortion bill does force an 11-year-old rape victim to have her rapist’s child without her consent. In short, even a corpse in Texas has more rights over its body than do women and girls.” ~ @politicaljunkyard2.0

This is a war on women.

Their men should be equally offended by the sheer arrogance of nine appointed officials choosing what they can and cannot do with their bodies in the event of sexual violence or incest.

Where are the brothers, the sons, the fathers, the uncles, the boyfriends, and whoever else this ruling might one day impact? Why don’t I hear the dismay and disgust in their collective voice?

As it pertains to sexual violence, I am sickened by the implications of this law. Not only do we punish an already traumatized victim, but we make them serve a life sentence. A moment of poor judgment could become a lifetime of sacrifice.

I haven’t opened a science textbook in a while, but the last time I checked, man + woman = baby under the right or wrong circumstances. That is why I am so perplexed that this ruling is perceived as a step back for women only. It’s a step back for the human race.

Ruth Bader Ginsberg must be turning in her grave. God bless her brilliant soul.

“I ask no favor for my sex…all I ask of our brethren is that they take their feet off our necks.” ~ Ruth Bader Ginsburg

When a woman is diagnosed with breast cancer, her entire family becomes infected by the disease. It makes each of them sick in different ways and ultimately the entire family has cancer. They care for their sick loved one and feel a different kind of pain, but it’s agonizing just the same.

This is the best scenario I can find to compare what will happen to families that are forced to have children that are unplanned. Yes, some will be in a position to look at it as a welcome surprise, but this is eternally optimistic.

Most people who seek an abortion, will still seek one—the greatest danger now becomes where will they go and who will perform it?

We are all under siege. Our rights are under attack. This ruling in Texas is terrifying to me.

It makes me grateful that I am 59 years old and I have retired from reproduction. If any man tries to tell me what to do with my body, he will be most sorry. I will never live in Texas and I hope many others share my conviction. I would like to see bans of all kinds spring up as a result.

Mankind has not been kind in Texas. He has overstepped and I can’t wait to be part of the movement that puts his foot in his mouth.

If you are looking for a way to make your difference, support Planned Parenthood. Reach out to your representatives and make your voice heard!

“Texas’s S.B. 8 violates Texan’s rights but the Supreme Court has let it go into effect. We aren’t backing down and are still fighting. Everyone deserves access to abortion. #BansOffOurBodies”  ~ Planned Parenthood (@PPFA) September 1, 2021