61 years of Life, this is what I know: “you might as well choose right now, it’s Love or Fear.”

I’ve always been aware of the great dichotomy between love and fear.

It’s a truism of spiritual search, I suppose, sort of a Metaphysics 101 thing. I’ve probably heard it, read it, and said it literally thousands of times over the course of my life. It’s always been one of those things that rang true with me, even as I wondered at its simplicity. Love and fear. The great illustration of light and darkness.

The revered Lubbock, Texas, singer-songwriter Jimmie Dale Gilmore incorporated the theme in a fantastic song called “Midnight Train,” written in 1991. You can find it on the album “After Awhile,” along with several other masterpieces of Texas music. I’ve been musing over the lyrics to the tune, as I watch in dismay the division and acrimony that’s become so commonplace in the country, and in my beloved Texas.

Driving around today, the day before my 61st birthday, the song’s lyrics kept bouncing around in my head. I’m a news junkie, but for my own mental health, I’ve consciously stepped back from the news sites and social media to which I subscribe, and I long ago reduced my presence on Facebook to barely a sliver of what it once was. So instead of listening to NPR like I normally would, I drove in silence, with only my thoughts for company. An eye-opening experience of its own, for sure, but I reckon that’s the topic of another essay.

“You may sit beside fear, and go worse than lonely, or travel with trust with love and faith restored. These choices you have, and these choices only. When that train rolls in, and you step on board,” Gilmore tells us. But it’s the closing line that gets me every time: “And you might as well choose right now, it’s love or fear.” That’s what kept rolling around in my mind, and then suddenly the truth of it all hit me. It may sound simplistic, but all the discord, shouting, all the bait-and-switching that’s gone on in our politics—they’re products of fear.

Think about it. Every great conflict in our country, every divisive policy, every hot button issue is motivated, at its core, by fear. The manufactured “voter integrity” bills that pop up in Republican states, the ones that invariably disenfranchise people of color in some form or fashion? They’re reactions to the inevitable demographic changes that are taking place in America. The power structure fears losing its place of prominence, so it gins up false narratives to justify making it harder for people of color to exercise their franchise. (This isn’t a new tactic, by the way. Remember the history of Jim Crow laws in the South.)

Reproductive rights? Restrictions have never been about life; they’re about controlling women’s autonomy over their own bodies. The fear is the male hierarchy losing control over the females in its orbit. If it was really about life, then this same male hierarchy would be leading the way against the death penalty, against child separation at the border, against mass shootings.

The defense of the hallowed Second Amendment? One of the greatest fear-based frauds of history, in my opinion. The reality is that a firearm is a durable good. It’s cheap to make and if you take care of it, lasts a long, long time. So the National Rifle Association—the trade organization of the industry, don’t forget that—has to find ways to keep those sales rolling in, right? The NRA does it by stoking fear: fear of criminals (read this as not-white people), and fear of a tyrannical government.

Fear, fear, fear. Apply some radical honesty to yourself, and see if the yardstick I’ve just described doesn’t apply to just about every conflictive issue in this country.

Living in these unprecedented times, it’s easy to feel overwhelmed. Already there are those who, when discussing climate change, for example, just want to give up. “We’re f*cked,” they say. “It’s not worth the fight, it’s too late.” That attitude of despair, in itself, is a product of fear. We must not, we cannot give in to despair. I believe there is room to extend ourselves, to evolve our thinking, to grow our spiritual selves so we can right the ship of state and live the ideals postulated by the Founders.

It’s easy to want to scream, to demonize the opposition, to give in to anger and frustration and hatred. But that’s where we are right now, and look where it’s gotten us. Rather, I believe we need to exercise compassion toward one another, and ask the simple question: Why are you afraid? What do you fear? Make those questions hashtags: #WhyAreYouAfraid? #WhatDoYouFear? And when they claim they fear nothing, and are acting in the best interest of whatever they claim they’re acting in the best interest of, we must gently, persistently respond with the kindness of radical honesty. “I love you, my brother, my sister, but you are not being honest with yourself, and so you cannot be honest with me. Take my hand, and talk to me, tell me what scares you.” Because at the root of it all, they’re scared of something. At the root of it all, we’re all scared of something. That’s what moves people to rail, to threaten, moves people to violence. The loudness helps them hide their own suffering and pain. The violence stems from their own sense of powerlessness.

I told a dear friend at the beginning of the pandemic that I felt like the world was at the beginning of a long, huge cosmic shrug. I still believe that, but I can see now that we each have a role to play (and I didn’t really think it would come to all this, not by a long shot). We are all the same species. (Race is a construct, remember that.) We are all children of the Mitochondrial Eve. (Google her.) And at our core, we are made of stardust and empty space, a microcosmic replica of the Universe we all inhabit. Those are realities. Not storybook origin stories, not man-made (literally) rules to live by, not constructs designed to create differences, to create “others” to blame. We are one people, sharing an ever-shrinking planet that we continue to degrade and destroy. That’s unsustainable. We all know this in our souls, but it’s easier to turn away from that reality and be pissed off at someone for something.

Make your choice. As Jimmie Dale Gilmore says, “And you might as well choose right now, it’s love or fear.” I’m going to do my best to choose love, difficult though that might be sometimes. As I enter my final act on this plane, I intend to employ radical honesty with myself and with people around me.

Join me, in your own way, if you can. Peace to you all. 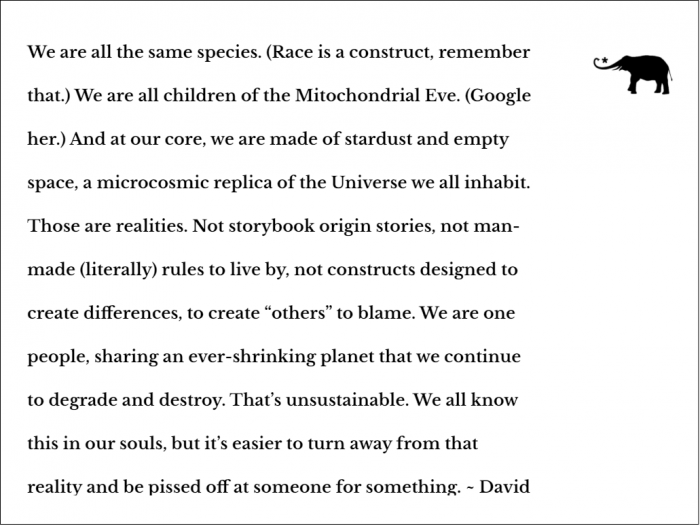 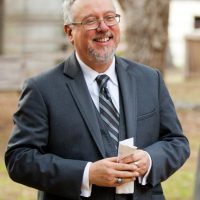 David Munoz is a writer, editor, and photographer living in Austin, Texas. He’s an Elephant Academy alum, a mystic in training, and can play a whole bunch of songs on th… Read full bio