Things to Watch besides Bolsonaro eating Pizza at the United Nations General Assembly in New York.

Unvaccinated heads of state attending the U.N. General Assembly may have to settle for a piece of pizza on a sidewalk instead of fine dining at New York’s restaurants. That is how Brazil’s President Jair Bolsonaro dined on his first night in New York https://t.co/2hqrRxt2WC #UNGA pic.twitter.com/AY2GUtpOD4

The 76th United Nations General Assembly is about to start, but we already have a viral picture of Brasil’s Jair Bolsonaro eating pizza outdoors.

This year’s General Assembly won’t be an easy one for the international community.

Leaders of the world have to tackle issues like the ongoing pandemic, the conflicts in Afghanistan, Syria, Yemen, and Ethiopia, and rising tensions between the United States and China—and of course, not to forget: climate change.

But before things even got started, the Brazilian delegation already stirred up a controversy. The United Nations allowed leaders to decide if they wanted to attend in person or digitally. New York’s Mayor Bill De Blasio already urged unvaccinated leaders not to show up at the event.

And that’s where things get tricky.

The United Nations won’t stop Bolsonaro from holding his speech at the United Nations because of his diplomatic status—but that doesn’t apply to restaurants and other public areas in New York City.

Bolsonaro could have avoided this controversy by simply delivering his speech online, but he decided to attend in person and create the first controversy of the week.

I have to admit that I chuckled when I saw Bolsonaro and his staff had to eat on the streets like a group of tourists—but this year’s General Assembly at the United Nations shouldn’t waste any time on Brazilian authorities dining on the streets of New York City.

There are more serious things to talk about. Here are five issues to keep an eye on this week:

1. After the United States, Australia, and Great Britain announced a new strategic partnership called “AUKUS,” many other nations were quite upset.

Close allies like France (and the European Union) feel betrayed, and China already expressed worries about being the target of this deal. The tensions between the United States and China are probably the biggest challenge for the international community at this point.

2. As Afghanistan is drifting into chaos after the withdrawal of Western troops, the international community has to take action.

If we don’t want the country to spiral into a humanitarian crisis this winter and become a breeding ground for international terrorism, we need to get leaders from around the world together to find solutions—and that includes Afghanistan’s neighboring countries China, Pakistan, and Iran.

3. The pandemic is still going, and there is not much doubt that some countries will face serious problems this winter.

The United States is facing a shortage of hospital beds in the Southern States, most African nations don’t have access to vaccines, and almost every country on the planet has to deal with actors who push fake news that hold people back from getting their shots.

4. Climate change is still happening, and there is no time to waste. After the Trump era, one can only hope that the international community returns to reason and starts taking serious steps to tackle the ongoing climate crisis.

No country should be allowed to take the pandemic as an excuse to slow down efforts around this incredibly important topic.

5. The role of the United States at the United Nations will be watched closely by leaders from around the world. Many hoped that Joe Biden would end the “America First” approach of his predecessor—but as of now, it doesn’t really look like that. Maybe allowing European travelers to travel to the United States again is a first step of the Biden administration to reconnect with close allies, but I highly doubt that this is enough.

Let’s hope President Biden uses this chance to address concerns of allies and find common grounds with China and Russia at the same time—it won’t be easy. 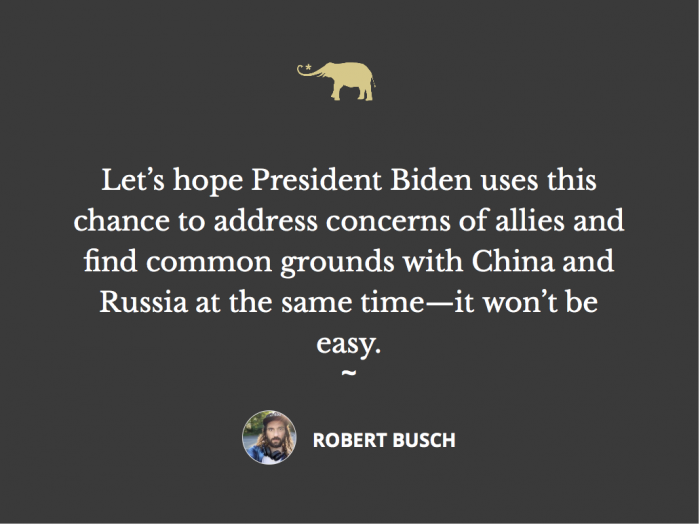 And yes, I know it’s much more fun to talk about a Brazilian leader who has to eat outside, but let’s not get distracted. The world needs leaders who are willing to take responsibility, cooperate with each other, and find solutions for the problems of our time.

The last thing we need is to make the General Assembly a stage for anti-vaxxers like Bolsonaro and other leaders who failed to protect their own citizens from a deadly disease.

I see the irony of writing this story around this picture of Bolsonaro while asking to focus on other topics.

But maybe, this article got you interested in following this week’s General Assembly of the United Nations—and that was actually my goal.

What do you expect from the United Nations? What is your hope? Which topic matters the most in your opinion?

Please feel free to share your perspective in a mindful article.