The Taliban are about to Take Power in Afghanistan & it’s Technically our Fault.

My heart breaks into pieces for my people who have lined up outside the banks to cash their savings and waiting at the gates foreign embassies to secure visas to leave. #Afghanistanisburning #Afganistan #Kabul pic.twitter.com/FfKsYiXRLa

Most of us heard about the withdrawal of our troops from Afghanistan. What sounds like the right thing to do is causing a humanitarian crisis that was more than foreseeable.

This morning I received a message from a reader complaining that we did not publish a story about the current situation in Afghanistan (yet).

I immediately started researching the topic but also found myself worrying if people are interested in reading about this dramatic turn of events happening so far away from most of us—but maybe that is part of a bigger problem.

There is so much going on in the world right now that it is hard to keep up with all the developing stories. While Florida is busy discussing mask mandates in schools and others decide to attend festivals during a pandemic situation, there are countries facing far more severe problems right now—and they need our help (and awareness).

Lebanon is facing the biggest economic crisis of its history. Up to 22 hours without electricity, lack of medication, and not much hope for anything to change anytime soon. The military took power in Myanmar, and activists are worried for their lives. I just spoke to a friend who is stuck in Morocco because of closed borders with Spain. And let’s not even get started discussing the Israel-Palestine conflict.

As someone who lives in Germany, I notice a huge difference between watching German news and American news. It almost seems as if Americans don’t care much about anything happening outside of the United States.

Withdrawing troops from Afghanistan had been a topic for years—and now it “finally” happened. It sounded pretty reasonable to end the mission in Afghanistan that started 20 years ago as a reaction to 9/11.

No war and no soldiers is a good thing, right?

Well, basically, I would agree with that. I was against the war in Afghanistan (and Iraq) when it started in October 2001. I was convinced that it’s just not possible to send the military to another country and implement democracy.

Some Americans (especially Republicans) will protest that statement and say, “But it worked in Germany.”

I don’t disagree with that. America freed Europe from the Nazis in World War II, and Germany was able to reintegrate itself into the community of democratic nations. But Afghanistan is not Germany.

It was naive to think that the military could transform Afghanistan into a democratic society like Germany. But nevertheless, the United States and European countries spent 20 years fighting the Taliban, building schools, and protecting elections. One could say, “At least, we tried.”

But that’s where my disagreement sets in. The United Nations always like to use the term “Responsibility to Protect,” and that’s exactly what we are talking about here.

If we send troops to another country and encourage local activists to stand up against tyrants, dictators, and terrorists, we can’t just leave them behind after deciding things haven’t worked out as planned. There is something that I would call “Responsibility to follow up.”

For those of you who’ve forgotten, removing the Taliban from power was the main reason to start that war in the first place. It was said that otherwise, Afghanistan would be a threat to the rest of the world. Not to forget civilians who fear for their safety, especially women.

Nothing has changed about that.

If the Taliban take power in Afghanistan, we are basically back at square one—with one difference: there are thousands of people in Afghanistan who worked with foreign troops to establish democracy. These folks are the ones that have to fear for their lives right now as you are reading this.

It is our responsibility to protect these people who stood up against the Taliban (with our help) for 20 years. We can’t just leave and say, “Good luck!”

As much as I don’t support the idea of intervening in other countries and bombing nations to achieve peace—once you started an adventure like that, you can’t just end it because popular opinion asks you to.

Speaking of popular opinion: it’s always easy to be against any form of military action. But there are cases where interventions can stop massacres, crimes against humanity, and warlords who might become a threat to the international community.

As much as I was against that military intervention when it started, we can’t just run away from our Responsibility to Protect.

There are no simple answers to any of these problems, but looking the other way is definitely not an option. 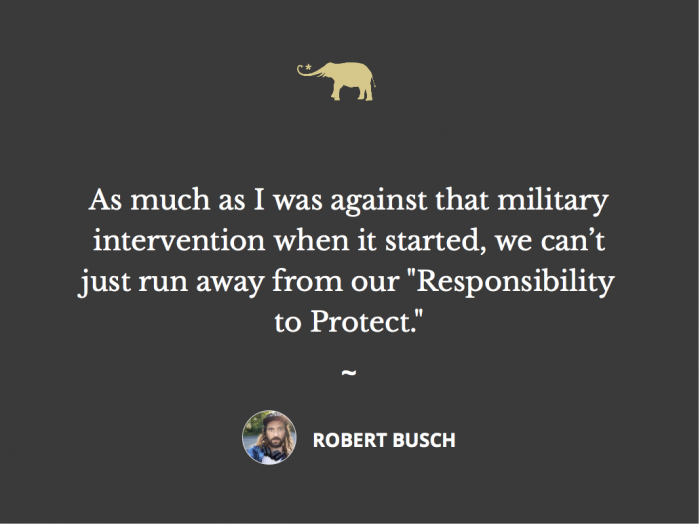