They have Rumi, they have Hafiz—but what about the people of Iran? 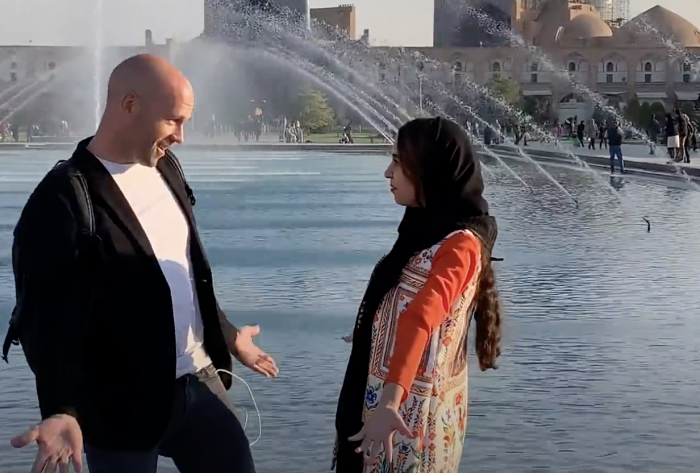 Santenello runs a YouTube channel that I had been following for a while, but this episode caught my attention immediately. Most of us do not know much about Iran, and when we hear about this country, it’s usually about nuclear weapons, religion, or lack of democracy.

But what about the people of Iran? What do we know about them? Do we actually know anything about them?

When I was a political science student, I spent a lot of time on inner-religious conflicts and foreign politics of Iran. I was dreaming of traveling to Iran for a field study.

What sounds crazy today wasn’t that unrealistic in the early 2000s. Iran had elected Mohammad Khatami as their first progressive president. Many political scientists and Iranian citizens were hoping to rejoin the international community—but then, George Bush jr. called Iran a part of the “Axis of Evil,” and things went down the hill.

Khatami’s failed attempt of connecting with Western countries ruined his reputation and he lost the next election against a guy called Mahmoud Ahmadinejad, who ended any hopes of peace or friendship between Iran and the United States.

But there was a window of opportunity for a short period of time. Who knows how things would have developed with a different person in the White House at that time? We will never find out.

But my dream remains. One day I want to travel to Iran. I want to go snowboarding in the mountains of Dizin.

And it’s not only about that. My dream is that one day we will be able to meet this rich culture without being blinded by political hostilities. But there are a lot of hurdles to overcome.

Santenello is my hero because he took the risk to travel to Iran for his documentary. He meets skaters, artists, and yogis—and talks with them about their daily life. He visits breathtaking monuments that give us an idea of how much this culture has to offer.

And he mentions Rumi and Hafiz, two of the most popular poets of Iran–or Persia as many of those who live in exile call it.

I remember my dad telling me about traveling to Persia as a child. I will never forget my kind and sophisticated friends from university who referred to themselves as Persians. And nowadays, I have the pleasure of working with colleagues who know more about Rumi, Hafiz, and other middle-east poets than I ever will.

This article is not going to discuss what went wrong in Iran over the last decades because nobody has an ultimate answer to that—but I feel that we owe young Iranians to hear their story.

As Santenello points out in his documentary, most young Iranians do not agree with the policies of Western countries, but they are fascinated by our way of living.

What impressed me the most was how many young people he found in Iran who speak perfect English. There is a young generation who secretly learned English and used VPN connections to access our entertainment industry—and we know nothing about these people; we didn’t even try.

We see young women skateboarding with friends. We hear Santenello talk to young men who are dancing in a park, and we find out that there are yoga teachers in Iran—there is so much in this documentary to unpack.

But please don’t get me wrong, this is not a manifesto in support of Iranian policies. I have zero tolerance for antisemitism and no desire to deal with religious extremists–but I do care for the people and the culture.

I want to learn about the people who are dreaming of a free Iran—I don’t want to talk with representatives of the ruling class.

There are so many countries on this planet that are not democracies and probably won’t be anytime soon—but there are young generations of humans who perfectly speak our language, watch the same movies, listen to the same music, have similar dreams—and don’t care much about politics. Iran is probably the most extreme example of that.

My lifetime dream is traveling to this country as a free person, and this is not about me. I could probably already find a way to get there, but that’s not what it is about. To me, it is about one of the oldest conflicts in the international community.

For more than 40 years, there had been no real contact between the West and Iran; and there were good reasons for that.

As I am writing this, there are probably some kids in Iran secretly watching American television, while someone in the United States finds joy in a Rumi poem.

There is a connection between our cultures that had been buried under hostility, fear, and corruption for decades.

I won’t solve this problem with this article, but maybe these words made you want to watch this beautiful documentary by Peter Santenello–and maybe that’s the first step toward world peace: being interested in other cultures.