When my Husband Confronted Me about my Drinking.

I remember the first time my husband sat me down and looked me in the eye and told me he was concerned about my drinking, about four years ago.

It was after a particularly late, drunken Saturday night, and he approached me in our bedroom the next morning while our three kids were innocently watching TV downstairs. I don’t remember where we had been or who we had been with the night before, but it was probably much of the same drunken scene that we always found ourselves in, with the same people.

What I do remember is the look on my husband’s face. A combination of sadness, disappointment, and fear.

“I think you’re drinking too much,” he said. “I’m worried about you.”

I recall the panic I felt at realizing that I was, in fact, in over my head. My husband was scared, and the situation suddenly felt out of control.

I remember not being able to catch my breath, thinking, “How are we having this conversation?”

I felt embarrassed. Ashamed. Angry at him at first. And then mad at myself for allowing my drinking to escalate to this point. I promised him that things would change.

“I will do better,” I said. “I won’t drink this much anymore.” It was a promise that I genuinely wanted to keep to him, because I was terrified of ever having to let go of alcohol. I could not fathom it. I needed to keep drinking. Booze had been a comfort to me since I was 15.

And that was how it always went. I did better. For a little while.

I would stop drinking during the weekdays. I would go to dinner with my husband and order a glass of wine, asking his permission to get a second glass—like a child. I was resentful that he was making me feel this way, making me question my relationship with my buddy, my trusted friend. But I knew I had no choice but to cooperate if I wanted to avoid having that shameful conversation again.

My husband and I stopped going out with large groups of friends for a little while, because we both knew the temptation for me to get plastered was too great. We never really talked about the fact that many of my friends and their husbands drank the same way as me at times. So why was I being punished? It wasn’t fair.

That was how it felt for so long.

But I knew deep down I had a harder time controlling myself than other people, even though I couldn’t admit it. I knew I couldn’t stop at just one drink, like my husband. He often didn’t even finish his one beer, leaving a few sips in the bottle, which baffled me.

I had myself and my husband convinced for years that it would be okay though. I constantly would stop for a bit and get it all under control. I would not let it get too out of hand, I told him. I didn’t have a problem, I told myself. But those early mornings lying awake in bed at 4 a.m., I would question it all. The shame cycle would begin again. I would worry. I would cry.

Little did my husband know that our quiet dinners out alone together, I obsessed over every single sip I took. I had a hard time concentrating on our conversations because I couldn’t stop thinking about my next drink. When could I order another glass? Was I allowed another? Would he get angry? Could I steal a sip of his drink when he was in the bathroom? I watched what people at other tables ordered and I kept my eye on the waitress. It consumed my every thought, and he never realized it.

Eventually, after a month or two of good behavior, I would start casually having a glass or two of wine during the week, having proved myself responsible. I genuinely thought that I could handle it. That I could drink like my husband and enjoy one glass and not feel compelled to drink the entire bottle. It was a slippery slope, because my one glass always turned into two. And that one day during the week that I was allowed to drink quickly morphed into a two day rule, because staying at home with the kids is hard, I would tell myself. Or my husband and I had a fight, so I deserved it. Or it was vacation. A holiday. A family member was visiting. The sun was shining! There was always an excuse.

Within a few weeks, I was right back to drinking every single night of the week, often crushing a bottle of wine a night on the couch by myself. My husband would avert his eyes, huffing and puffing as he took out the recycling in the morning. I would pop Advil in the morning, chug some water, and pretend that nothing was wrong. Nothing to see here.

And my husband would wait until I had another eventful Saturday night, or I did something else stupid, which would give him allowance to approach me again about my consumption. Skipping the boys’ hockey games because I hung around drinking with friends at brunch, blacking out on Easter, falling down the stairs drunk in front of the kids after a casual dinner out. I gave him endless opportunities to confront me, as the chances were plentiful.

And my husband would always sit me down the next morning, begging me to consider drinking less. Sometimes, he would be kind and loving; other times, he would lose his patience. Regardless, I would always promise him to do better, and for a few months after our talks, I would. It was a vicious cycle. I would later learn that he just hung on, hoping and praying I would eventually figure it out.

This routine lasted for years, until finally I realized I couldn’t do it anymore. One day, I woke up and turned to my husband and finally asked for his help. There was no rock bottom. No major incident. I finally just got tired of being on the hamster wheel. I got tired of the awful, shameful, hungover mornings and that I was unable to look at myself in the mirror. I grew tired of trying to convince myself everything was fine, because I was definitely not fine.

I am so grateful every second of every day that I finally found the courage to make that change. I realized that I couldn’t live that life a second longer, so I chose to stop drinking. I chose a sober life. I chose freedom. 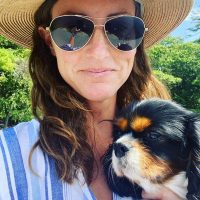 Kim Kearns is a writer who lives outside of Boston, Massachusetts with her husband and three beautiful children. After relying on alcohol for over 20 years, she discovered a l… Read full bio