Depressed, Bankrupt & Hopeless: a Letter to my 20s.

I’m not going to pretend that writing this isn’t hard to write. And it’s not because I’m still stuck in the same place that I was during my 20s, but because I’m no longer where you stand. I dared to hope in the depths of my worst moments that my future would be brighter, and yet I was still plagued with worry over the years that it wouldn’t be. And I’m here to tell you this: it gets better.

I spent the years that led up to you wishing time away. I couldn’t wait to be double digits, and then 13 seemed cool, 16 felt mature, and 18 almost adult-like. But what I really couldn’t wait for were my 20s. And then there you were, ready to embrace me with my first pair of $800 designer shoes.

I had one goal for my 20s: to own a pair of Christian Louboutin heels. I’d admired them since I was 13, and my 20s were the time when my dreams came true.

I felt, as I slipped my toes into those suede stiletto heels with their sleek, red sole, that my 20s were going to be the best years of my life. I could feel it as I counted out the extortionate price tag for these shoes in cash. I inhaled the scent of excitement as I handed it over to the cashier. And I manifested all the places I would wear them as I swung my shopping bag over my shoulder and walked out the door.

Two months later, my life spiraled, and those shoes were pushed to the back of my wardrobe. The years that followed were a toxic cocktail of depression, debt, and isolation.

I’d just started a new relationship and I should have been caught up in the excitement of dating. Love is a beautiful thing, and yet I gave the worst of myself over to a person whose only fault was that he came along at the wrong time.

My dad was there one day and gone the next, and the abandonment you felt when the person who is half responsible for your existence wakes up one day and leaves is something you carried with you into your 30s.

The need for approval, the need to be reassured that you’re loved, is toxic to your well-being, and yet there’s no magic cure for childhood trauma. Even when you’re in your 20s and no longer a child, the pain doesn’t hurt any less. If anything, it hurts more, because you understand how easy it is to turn around and leave, and yet it doesn’t stop the reality from cutting into you.

Some people turn to drugs or alcohol as a coping mechanism. You turned to spending.

What followed was a spiral of spending. You spent to fill a void. You spent to help lessen the burden of debt your mum was left with. Then you spent because time spent finding things to buy was less time spent hating yourself and wishing you could end this cycle that had become your life.

Soon, you were staring at $55,000 worth of debt. It was all you could think about. The debt clung to every fiber of your being. It was there when you woke up until the moment you went to sleep, and it interrupted your dreams as you worried, even in sleep, that the debt would engulf you, taking you down into the depths of the darkness that you felt every waking moment.

You would sit in the bath for hours just thinking about the debt surrounding you. And the truth is, you didn’t really own anything, not really. There was nothing you’d bought that was worth a dime, and yet that debt nearly cost you your life.

The line between wanting the cycle of your life to end and wanting to no longer be alive was blurred, and before long, death was all you thought about. Pills were the decided weapon of choice. Effective yet not too messy. You see, you still cared about the people you were leaving behind, even in your worst moments.

You never took those pills, and I thank you for this every day. Something inside of you snapped and you sought help before you ended your life, and we wouldn’t be where we are today if that hadn’t happened.

Society would have you believe that declaring yourself bankrupt is the easy way out of debt. But it is soul-destroying having to admit that you’ve f*cked up so severely that you have no other route to take than to own nothing.

Yet going bankrupt was the foundation upon which you re-built your life. You could finally breathe. You were still a recluse who barely left the house. Depression still made you feel unlovable, and anxiety plagued your every move. But you could see a tiny glimmer of a future, a future that broke out of this cycle you’d been consumed by.

Shame followed you for years. Your cheeks stung with embarrassment whenever you told people about your story, feeling the need to make excuses for everything that had happened. But you didn’t owe explanations to anyone, and after a while, you owned your mistakes for what they were: learning experiences.

From 21 to 28, you spent your time picking up the pieces from the bomb that exploded, shattering your life into thousands of tiny, broken pieces. Gradually, you gained parts of yourself back again. The you you were before your 20s. The you who would laugh easily, the you who felt seen, the you who felt like she had something to offer to this world.

After a while, happiness clung to you in the same way sadness and depression used to.

And somewhere in that mix you found love again, and then the best thing happened: you become a mum.

And though your 20s were nothing like you’d hoped they’d be, they ultimately led you to being in the exact spot you are standing today. And that, I promise you, you would not change for anything.

Your depression and debt do not define you.

Not now, not then, not ever. 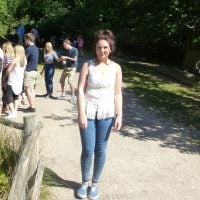