How Grief Lives in Us.

I had my own notion of grief.

I thought it was the sad time

That followed the death of someone you love.

And you had to push through it

To get to the other side.

But I’m learning there is no other side.

There is no pushing through.

And grief is not something you complete,

But rather, you endure.

Grief is not a task to finish

But an element of yourself,

An alteration of your being.

A new way of seeing.

A new definition of self.

Yesterday was my dad’s birthday.

I felt off all morning until I remembered the significance of the day.

My father died just over two years ago; I’d begun to feel like I was steadying from losing him when the pandemic began.

Losing my dad has been different from when my brother died. I was 24 when I lost my brother; the death of my only sibling was the big Before and After, the defining event that changed my life forever. Perched on the edge of young adulthood, I regressed; I moved back in with my parents. I slept in their bed at night like an overgrown toddler. I ate, slept, and dreamt grief for over a year.

I had so much to grieve for: my hobbled family. The only other person with whom I’d shared my childhood. The future I’d assumed my brother and I would have together. The nieces and nephews I might’ve had, smudged away before I could imagine their faces.

Along with the intense pain of the moment, I also felt haunted by the future—the idea that someday, I’d have to endure my parents’ deaths without the only other person who shared them with me. The stark loneliness of that felt unbearable.

Sometimes faster than seems possible, sometimes syrupy slow. Twenty years slipped by; twenty years of living and grieving and falling in love and having babies and playing with words.

Losing my dad without my brother beside me was both harder and gentler than I could’ve imagined. Sometimes during my dad’s illness, I tried to summon my brother—at my dad’s bedside, I envisioned a third chair where my brother would sit. I imagined us stealing away to the family room together to trade dark jokes when it all got to be too much. Sometimes we’d share the silence and sometimes we’d compare memories, holding them up to the light. We’d say, Remember, remember, remember and it would be a kind of a prayer.

But I couldn’t really conjure him.

Time has changed me, swept me away from who my brother might be. His birthday, too, was a few weeks ago; he would have been 44 instead of frozen at 21, a visitor from an analogue world, devoid of smart phones and social media. Who would I be had I not lost him, had I not been taught that there are no shortcuts through pain, that the only way through is to wade through the messy meat of it?

Grief rewrote me. It’s not a tidy process that we can conquer or move on from. If we’re brave enough to stare straight into it, parts of us will mend. With time, our loss won’t be the first waking thought we have each morning, the last before we drift off to sleep.

Losing my dad stirred up my grief for my brother. I’ve built a life around my brother’s absence. I’ve healed and revised. And yet, I still thought, during my dad’s illness and after, my brother should be here. I still mourned that he wasn’t.

And yet, losing my brother also prepared me for losing my dad. I’d been schooled in the importance of goodbyes, of presence, of learning to hold light and dark at the same time. I knew that when I felt overwhelmed, I could walk to the hospital’s family room and stare at the mountains, sturdy and solid and stunning. I knew that I needed to write down the sweet words that passed between my dad and I so I could hold them close, like jewels. I knew the importance of saying goodbye to my dad’s physical body, which I couldn’t do when my brother died.

And I knew I needed to make space for the grief that washed over me like waves. To rest in the small pauses between the pain, and to trust that those spaces would stretch and widen. I knew, when my dad died, that my grief for him would stay; it would become less fierce and less consuming, but it would never fully dissipate.

When we love someone, that love is etched on us. Grief is simply loving someone whose body is gone. When someone dies, our love doesn’t suddenly go dark like a room with the lights flicked off, and so the grief lingers, too. Like a deep ring on a tree, like an upward spiral that we’ll walk our entire lives. Some days, it’s sharp and fresh; we hover near the center of our pain. At other times, it’s an old wound we barely notice.

Western culture teaches us to strive. To celebrate milestones and make lists of items to neatly check off. But grief isn’t like that. It’s not a race we can complete. It’s a slow process of adjusting to an absence that’s so thick it becomes a presence, an ache in the sternum, a longing that varies in intensity but remains.

Sometimes, like the other night on my dad’s birthday, the love and loss twists together, and it hurts in a sweet, soft way, like a longing, like a sad song that crawls into your bones. It makes me whisper into the night, how lucky was I to be your daughter?

At first, the wound is acute. We tend to it. We expect it to hurt. We take it easy; we try to be patient with ourselves. Later, it might throb on rainy days. We don’t return to the version of ourselves who existed from before losing them. 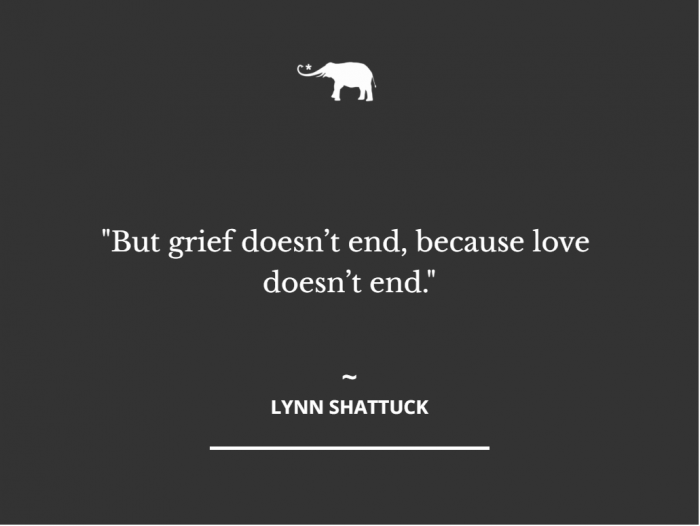 Hearted by and 4 other readers