How I Started to Break Free from Anxious Attachment.

Codependency. To some it is just a word. To me its a scary four-letter word.

For a long time after learning what codependency was, I battled facing it every day.

This word showed up on my feed on Instagram, made its way to my alphabet soup and into my late night dreams. Then one day, when I had had enough, I faced it. I faced it as if it were the school yard bully during third grade recess on a cold New England day. I walked right up to it, looked it in the eye, and accepted that I was codependent.

I’m not a hero among us; I am a human and I have flaws. One of those flaws was codependency.

After I accepted I was codependent, I could heal it. And I did. I worked at releasing myself from the binds of other people and my need to help to the point where I was left emptied and exhausted with no one to fill my tank with love and praise. I learned how to set up boundaries. I was no longer codependent—but I work at this every day.

Recently, I realized I needed to face another one of my flaws. Years ago, I took an attachment style quiz. Eighty-six percent secure, 14 percent anxious. When I saw the low score for anxious, I quickly picked it up, brought it to my living room, and placed the 14 percent under the rug and walked away. I wore my badge of 86 percent secure as an honor. I was proud so I ignored the anxious I still had in me. I convinced myself that if I ignored it, it would fix itself as if it were my credit score and I was about to pay down my debt.

But…that is not how this works.

I could see my anxious attachment showing up when the guy I was dating didn’t respond in the way I wanted him to. If I got upset and we didn’t resolve it in that moment I wouldn’t let it go. I would call or text too much instead of taking the space we both needed. At times, not all the time, I was waiting for him to call or invite me out. I even cancelled plans in the event he might reach out and invite me over. I was seeing that I was spending more time wondering about this relationship more than I was anything else. I could see the signs, but when I did, I remembered that I was mostly secure so I didn’t pay much attention to it.

I sat in my living room, on the verge of turning 45, all of my kids moved out and on with their lives, my three-year relationship falling apart, and realized if I did not fix what needed to be fixed, I would not be able to grow and move to where life wanted me to go. I made a decision in that moment to face both my abandonment and anxious attachment issues (usually they go hand in hand) and I booked a trip to London, on my own.

Years ago, I too saw “Eat, Pray, Love” and “Wild” and never imagined I would be that kind of a woman. The kind to go, leave, explore because I was hurt or in pain. But when it was time to sink or swim, I chose London.

For the weeks before my trip, I went through all of it. All the emotions. I was excited, scared, and then I was second-guessing what I had done. The more I tried to convince myself staying home was safer, the more I realized I needed to go, so I did. I packed, organized, ordered the outlet adapters, and checked the weather 100 times.

The day I was suppose to leave, I tried to talk myself out of going. As I told myself there could be a killer on the plane or a driver could kidnap me when I landed, I packed my final things. As I tried to convince myself that if I stayed my relationship would repair itself, I put my luggage in the Uber. As I imagined my kids living without me, I bordered the plane and before I knew it, I was watching movies and eating a sandwich somewhere over the Atlantic. I looked out the window just to see darkness, and whispered to myself, “What the heck are you doing?”

While I was in London I did the things we do when we are self-healing and trying to figure out who we are. I cried, I laughed, I talked to strangers, and I slept.

Before I left I had so many things to think about but realized I had no time to go over my failing relationship in detail while I was in pub with someone getting to know the details of her daughter’s wedding. I had no time to figure out which way I should direct my writing career as I visited Buckingham Palace. I had no time to figure out if I had spent the last 45 years in the right way or not because I was too busy living out loud. And while I was living out loud, in a new place with so much going on, I was facing my fears and breaking cycles of who I was convinced I had been for years.

Coming home was incredible. I was relaxed. I felt better. I had a clear head. I sat on the plane for what seemed like forever and was able to go over and make decisions about my life I felt I had to make. I was proud of myself for going on this trip on my own. If I can go to London on my own, I can do anything. I can heal my abandonment issues and get my anxious attachment in order, and it wasn’t until I was home with jet lag that I figured out the things I needed to figure out.

My relationship was worth saving and I could still be free while I was in a relationship. Free to travel, go to dinner on my own, or celebrate my birthday with just my friends. I realized my past 45 years have been spent well and I had three amazing kids as proof. I am a writer so writing can only take me down one path, and that is writing.

While on my own in a new country with faces I have never seen before, I learned more about me. I learned that I am capable of accomplishing great things because I am strong enough and brave enough to face what I need to face in order to live a life I am both happy with and proud of. 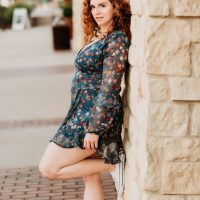 Kelly Smith, originally from Boston, Massachusetts, makes her home in beautiful Austin, Texas. She is a published author with her second book releasing soon. A mom to three bo… Read full bio